Even though he was very creative since he was a child, it was not clear to Jesús “Bubu” Negrón – one of the most important conceptual artists of his generation in Latin America – “what being an artist was about.” He discovered it as an art student in San Juan, when he intervened in a totally abandoned bronze statue – a sculpture of Puerto Rico’s first world champion, Sixto Escobar. 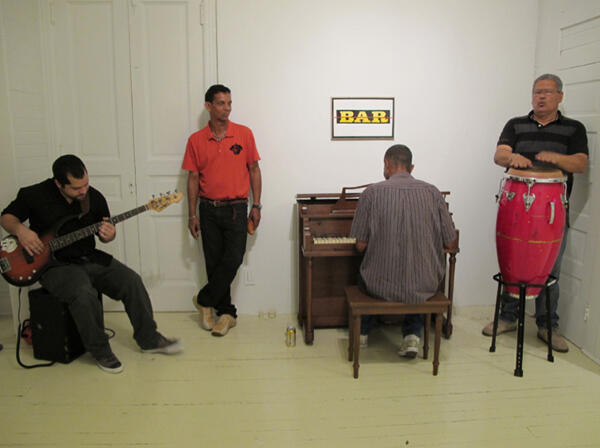 One of the boxer’s legs was destroyed and what Bubu Negrón did was to literally put the leg in plaster, as if it had accidentally broken or had been broken by someone. This intervention, humorous and highly critical at the same time, was covered by the press and Bubu Negrón began to become known. At that moment his passion for conceptual art was born and he began to work, in a brilliant way, on that which has defined a great part of his work: the combination of play with the profound and provocative social and political critique. Passion, originality, and professionalism opened the doors to his numerous exhibitions/international projects – ranging from his valued “Colillones” (enormous cigarette butts, made of cigarette butts thrown away in the streets), to interventions in small towns of Central America. He was then invited to Art Basel-Miami (2003), the San Juan Poly/Graphic Triennial (2004), then came his “Rosa tecata” (a gigantic flower made of cardboard and banana leaves, like those made in small scale by the drug addicts of San Juan to sell to the tourists and make some money to buy their “cure” or next dose), presented side by side to Pistoletto’s la rosa; his participation in the first Torino Triennale Tremusei (Three Museums Triennial), Torino (2005), the final project of his residence in Utrecht, The Netherlands, late 2005, in which he intervened hundreds of bicycles, covering them with fluorescent tape and making them ride at night in the city; his Puerto Rican “Pica” (a betting machine which makes little horses run a race like in a racetrack), exhibited first in Puerto Rico and then in Art Basel- Switzerland (2006), a well deserved invitation to participate in the Whitney Biennial (2006), where the artist took a table from one of the African street vendors who sell handicraft outside museums and a cart for selling hot dogs and placed them under the title Honoris causa, and even his rug made of cigarette butts exhibited at the Sharjah Biennial of the United Arab Emirates (2007) .

As we have seen, between play and social critique, Bubu Negrón (Arecibo-Barceloneta, PR, l975) takes the everyday out of context, revealing the life of the common man and the inhuman and unfair world in which he lives, presenting him in the elitist spaces of art fairs and major biennials.

In these difficult times, Bubu, who is also a musician, has not given up; he has worked as a gardener, and recently he has drawn over 400 extraordinary miniatures of everyday objects that were sold for $100. The artist has not forgotten his proposal and in his recent exhibition at Roberto Paradise Gallery (owned by Francisco Rovira) in 2006, under the title “Jackpot Series” – and in dialogue with the Pica that he had presented at Art Basel-Switzerland (with Francisco Rovira from Galería Comercial), he presents a series of intervened slot machines (those found in different shops, not the ones in the casinos), Local Slot Machines, and a Piano Bar. The artist explains that an artist´s life (as well as the lives of many collectors) is like an enormous, brutal and constant game of chance.

And once again, Jesús “Bubu” Negrón wants to show us that not only is he a witness and a critic of the reality that surrounds him/us, but that he is also a witness of the human condition and an excellent visual chronicler and poet.