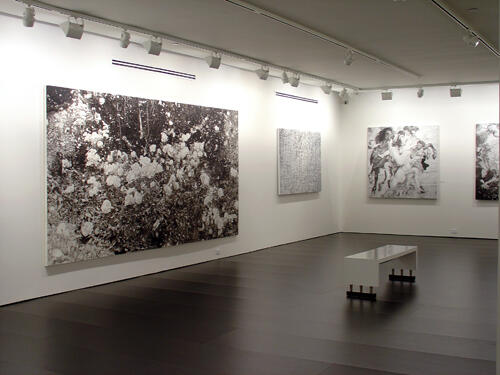 From March 15 to April 23 Nohra Haime gallery staged the exhibition “Fin de siècle” , a solo show by Hugo Bastidas, an artist born in Quito, who received his artistic training in the United States, and who has had numerous international exhibitions. With admirable dedication and constancy, Hugo Bastidas exclusively utilizes the technique of oil on canvas and different nuances of white and black, to reach remarkable levels of image definition. On this occasion the canvases Five Dollars a Dozen, The Glow and The Buildup, which are evidence of the artist’s notable skill, may be highlighted. The detail of the roses, the particular quality of trees, and the strokes that configure the stones, are examples of a refined mannerism. Through a unique and unmistakable technique, Bastidas recreates allegoric scenes of the history of Classic art, the baroque imaginary and mythological themes. In Wake Up, Wake Up - After Goya and Kimisko, the artist makes reference to the print El sueño de la razón produce monstruos (The dream of reason produces monsters), included in “Los Caprichos” (“The whims) series by Spanish painter Francisco de Goya, and in Naked Nude and Her Mirror he reproduces “La Venus del espejo” (“Venus at her mirror”) by Diego Velázquez.