Gean Moreno and Ernesto Oroza are both Miami cultural heavyweights, and in their work together are known for curating, writing and research-driven artistic practice. 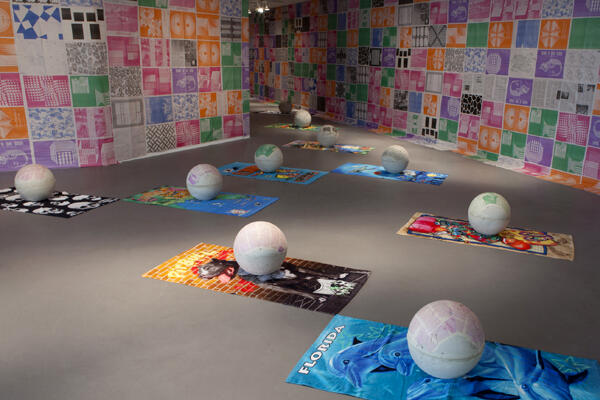 The two have collaborated on several projects, harkening back to their first work together in 2008, Studio Scrap Stool. These stools, cut and reorganized 2x4” planks, were the beginning of a dialogue regarding materials and their concern with the standards of a “designed object,” and how that could be manipulated to produce meaning. This early collaboration lead to an article published in e-flux journal called Generic Objects, where they zeroed in on the locus of their practice, the generic object. Using the scientifico/poeticus language of a philosophical art practice, they were able to delve into several definitions of the “generic object” as well as speculations regarding its origins and possible functions. Orange Tsunami, at Wharton + Espinosa, is bright, punchy, and continues this dialectics of material with an investigation into the tourism-based cultural identity that Miami propagates and seems to embrace.

Gloriously bright, tacky beach towels grace the floor in elegant patterns, all aligned with the diagonal of the gallery’s glass doors, superimposing a new virtual plane over the orthogonality of the gallery’s floor plan. Atop each grinning dolphin, orange sunset and palm tree silhouette rests a cement globe, with veins from the cement-pouring process dividing the two halves, and a sheaf of newspaper embedded in their tops is still mostly legible. On the back wall of the gallery a video plays on a loop. The same newspapers, open to their writing side in the cement balls, have been reversed to wallpaper the gallery in disarmingly pretty creamsicle colors and patterns sourced from different archives or bound to on-going research projects.

The images on, and patterning of, these papers on the walls are open to meaningful-- perhaps political-- interpretation. They have structural correlations that can create entertaining visual connections between the towels and globes. Such as, a newsprint photograph of parking spaces secured by concrete sphere bollards relates to the handmade spheres on the towels, which mimic the shape of the parking place.

The spheres could also be a stand-in for the tourist, resting on the necessary, preordained souvenir purchase. Taking this to a further conclusion, it is even a cynical look at the repetitive banality of the supposedly sentimental object. These bright towels might hold shards of memory, such as being sat upon during little Manny Notreal’s first kiss, or may have been swaddling for Gloria Fakename’s baby. Indeed, the souvenir, a great example of the “generic object,” is the receptacle for innumerable possible moments of great or negligible importance.

Julio Garcia Espinosa’s 1978 film Son o No Son, “to be or not to be,” plays at the back of the gallery, on a loop. A group speaks to one another, and a woman dances to narration in Spanish. Those without the language may be lost but for the motif of her body creating multiple shadows, and, generally, cultural references in this exhibition run deep and can so confound the uninitiated that the newspapers become required reading. The same ones that wallpaper the gallery are also available to take home. Moreno and Oroza edit and produce these newspapers, collectively known as Tabloid . Some articles and experiments are more successful than others, but the overall concept is vital.