It is always a privilege when someone opens that whimsical window that leads to the unsuspected inner world of each human being. This is exactly the risk and the joy afforded by the exhibition “A little window inside my head”, by Cuban artist residing in Miami Ana Albertina Delgado. 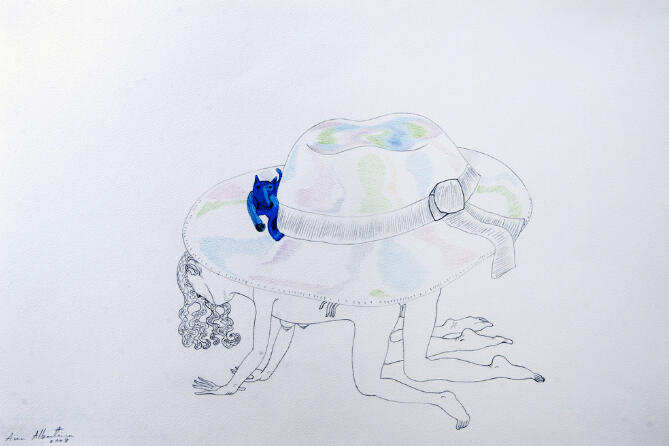 The exhibition, held at Carol Jazzar Contemporary Art Gallery, comprises some fifteen drawings in graphite, in which the clean lines and the delicacy of the stroke are the most noteworthy qualities.

The exquisite drawings on paper always have a feminine figure at their center, a figure that, alone with itself, enters into a world of fabrications which is not risk free. Indeed, Ana Albertina´s drawings exist in that splinter of light-darkness that is the liminal space where fear and daydream cross each other, interweaving that sour-sweet fable that is our existence.

The drawings have a certain autobiographic aura. At times we seem to recognize certain features of Ana Albertina´s physiognomy transfigured into that of an adolescent, while at other moments we remain surprised and filled with awe when discovering ourselves under the skin outlined in the drawing. Sensuality, ambiguity, desire, chimeras, prejudices and longings to which we gain access through a half-open door, a flower, a hat, a blue dog; in our eagerness to become voyeurs, we can hardly pry beyond what we see, while a long road remains to be travelled, tied to our imagination, our fears and our desires.

Ana Albertina, who has produced a marvelous body of paintings in oil on canvas, in which the use of color is of fundamental significance, prefers in her drawings the delicacy of color pencils – so closely associated to our childhood lucubrations. The artist uses color in a precise manner, concentrating it in details, neuralgic zones where the dramatic tension of the narrated or suggested story is concentrated in the manner of a “chakra”, an energetic center which will trigger the precious moment of illumination.

Ana Albertina Delgado’s peculiar universe is charged with the most varied influences contained in Cuban popular culture, especially the heritage linked to the peasant and Afro-Cuban imagery, the popular Mexican culture, as well as the feminist and feminine tradition that floods all her work.

Like a delicate thread, Ana’s stroke sews one drawing to another to create a continued history that is born in itself, takes the course of the sensual line and becomes definitely installed in the viewer. Such is the magic that inhabits this series of drawings in which the artist achieves impressive synthesis and overflowing sensuality.

The drawings that make up “A little window inside my head” recreate at times oneiric atmospheres which could lead us to think – mistakenly – of a surreal universe, whereas the works are actually related, both on account of their formal quality and of their spirit, with the nineteenth-century French symbolism, influenced by the Japanese posters and prints of the end of the century.

Ana’s drawings take us by the hand to the enigmatic drawings of Aubrey Beardsley, in which synthesis and elegance of the stroke – just like in Ana Albertina’s oeuvre – are the perfect sign of a universe overflowing with decadence and hedonism.