Julia P. Herzberg: Let’s talk about the various decisions you made when creating Mute, this very beautiful series of paintings on paper characterized by rows of undulating abstract gestures in the form of small oblong marks. Each work on paper has a slightly different mark from the preceding one; each displays, almost paradoxically, sameness and difference at once. (Ill. 1) Share with me some of the interesting aspects of this series. What was the impetus for this exploration; how did you apply color; how did you give form to the mark with the brush; why did you choose muted colors to create them; why and how did rhythm become a determining element in the overall composition; and what artists may have informed your abstract language? 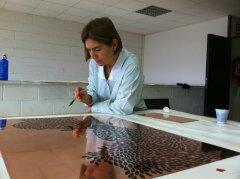 Francisca Sutil: I started working on the Mute series in 2009, and I am still working on it. However, prior to starting this series, I had worked for many years on different series using different mediums and supports, which included pigmented gesso on linen mounted on wood ( Fragments of Life, Voices of Silence, and Cerebrations ); pigmented gesso and oil on linen mounted on wood ( Spaces, Transmutations, and Interludios); China ink and oil à l’essence on paper (from the Spaces series), and watercolor ( Transformations).

Beginning with the series Spaces in 1998, I painted a single vertical brushstroke from the top of the linen or paper support to the bottom, forming a band of color. In the series Interlude / Interludio (2008-2009), I added horizontal bands across the vertical ones. (Ill. 2) Because of the way in which I applied the layers of pigmented gesso and oil on linen in those works, among others, I sense an illusion of space between the continuous brushstrokes. Most of the paintings from those years were saturated with color; they were visually exuberant. At some point, I realized that the way I was using color in those series had reached an end point, at least for the moment: for me, they were finished.

Having come to that realization, I slowly started to think about my next direction. In the solitude of my studio, I asked myself the same question I ask each time I begin a new investigation. How do I start again? From zero? At some point, I noticed some small wooden boards or tablets with short brushstrokes on them that I had made and used through the years to test the viscosity, the tone, or other qualities of the paint I was going to use. I tested the color on those boards to make sure it was absolutely right because I only made the vertical brushstroke one time.

The small boards suddenly intrigued me. So I decided that if I were going to start from zero, I would do a childhood exercise called palotes. When I was a child in preschool, the teacher had us make little strokes with a pencil on paper to train our hands, so that we would learn to write as our hand-eye-brain coordination developed. It was a very basic exercise! I started by making a mark with a small, square oil brush on the boards. Then I tested different brushes, making single marks that had an interesting rhythm to them. It took me time to understand what I was doing because the marks did not connect to my previous work. But at some point I realized the small oblong shapes were very interesting, fresh, new. I trusted my intuition and proceeded with these marks. Since I was tired of using color, really exhausted by it, I decided to paint with white, black, and grays—with mid tones. They were very silent. They didn’t speak in the same way that pure, bright color does. Since color has a charge, I decided to work with soft colors. (Ill. 3)

JPH: The repetition of brushstrokes formally connects to the way you worked previously. Tell me about your labor-intensive process. The marks are not only delicately painted, but they also convey an easy, slow movement.

FS: When I start working, I go in the studio early in the morning and stay there until I finish the specific work on paper. While I am painting, I don’t stop to think how I will apply each brushstroke—my hand just moves with confidence and control. There is a ritualistic tempo to the gestural movement that I like. Since I am in an almost meditative state of concentration, I am exhausted at the end of the day. That is why I don’t work everyday. I have to leave some time in between working on one piece and the next to recover from the intensity.

JPH: What brushes do you use to make the oblong-shaped marks and how do you apply them?

FS: I use brushes of different widths, making one mark at a time. Each is very precisely painted because I do not make corrections. I repeat the mark over and over again until the composition is completed.

JPH: Let’s talk about the different mediums you used in the Mute series.

FS: I have used gouache, a water-based paint with white in it, watercolor, oil, and Chinese ink. Gouache and watercolor are both opaque. In the watercolors, the marks have rich tonal variations because some of the color accumulates in some parts of the brush and not in others. Depending on the shape of the brush, on how I move or point the brush as well as the pressure I exert on it, the colors appear as you see them. It is sort of amazing to me that I get these effects. When I use oil, I add a bit of turpentine to the colors to get a creamy consistency. China ink, used in Chinese and Japanese calligraphy, is very dark, resulting in a different perceptual richness (see above Ill. 1).

JPH: I would say that, whatever the medium, all the marks, some overlapping and others discretely spaced, are slightly varied. Even when there are hundreds of them in a single composition, they seem to be in conversation, even if we cannot interpret it. The same calligraphic intricacy is found in Chinese and Japanese scrolls, for example. We admire their beauty without knowing their meaning.

FS: You make some interesting points that are central to the conceptual understanding of this series. For at least a year, I was concentrated on developing the rhythm, shape, and tonal quality of the marks, but I kept asking myself: What do they mean? In time I realized that each sheet of paper was like a written language with an uncoded message. (Ill. 4)

JPH: You mean that you likened the form of the mark, the rhythm of the lines, and the resulting composition to a written page?

FS: Yes, exactly. And once I became conscious of this, I began to emphasize the characteristics of a written page. The image in illustration 5 was painted the day after the earthquake in Chile on February 28, 2010. (Ill. 5) The overlapping and crossed lines suggest that there was a connected energy between the earthquake movement and my mind/hand producing the work in the aftermath of that terrible disaster.

Having understood these works as written pages, I would like to point to two elements in my creative process. One is the rational and intentional action; the other, a less conscious awareness, an inner energy that flows into the act of painting.

JPH: In abstract painting, content is open to the spectator, even in the instances when you title the work Transmutations or Voices of Silence. There will be many interpretations of Mute as well. What are some of your thoughts on your works’ inner meanings? (Ill. 6)

FS: Over the years, I have felt that the content comes from my own inner life, my autobiographical issues, my reflections and experiences. At this point, I am very troubled by political and social disturbances in the world. And I think that the series Mute speaks to both my perceptions of and frustrations with those problems. As a result, I have tried to transform the negative and problematic realities narrated by the media into a more poetic, positive expression.

JPH: An echo of a transformed reality?

JPH: Are there any artists whose work has inspired your formal or conceptual directions? Were there any who have used forms of “writing” in their abstract idioms?

FS: When I did handmade paper pieces early in my career, I certainly admired Ellsworth Kelly’s early work, notable for its balance of form and color. I still feel a close connection to Rothko’s mature work because of his luminous sense of color and capacity to evoke emotional and spiritual states of mind. The same for Brice Marden for his color sensibility and capacity to evolve his abstract imagery convincingly and coherently.

I was not inspired by any of the abstract artists whose calligraphic idioms I knew when I began the Mute series. That work had its beginnings by my experimenting with palotes.

JPH: This new body of work furthers the abstract idiom that you have evolved from a more linear sensibility to a more organic flow of repeatedly quiet expressionistic marks. Thank you for talking about your artistic processes and for sharing your thoughts on the interpretive possibilities of Mute . I look forward to our next round of conversations.