Sitting in a pub in Buenos Aires in mid-July, the 56th Venice Biennial seems an already distant event. This edition is, however, an important one for the Argentine art scene, which it will be worth revisiting for further information and definition of stances regarding the work of the three artists from this country who were invited to participate in the exhibition All the World’s Futures, curated by Okwui Enwezor. 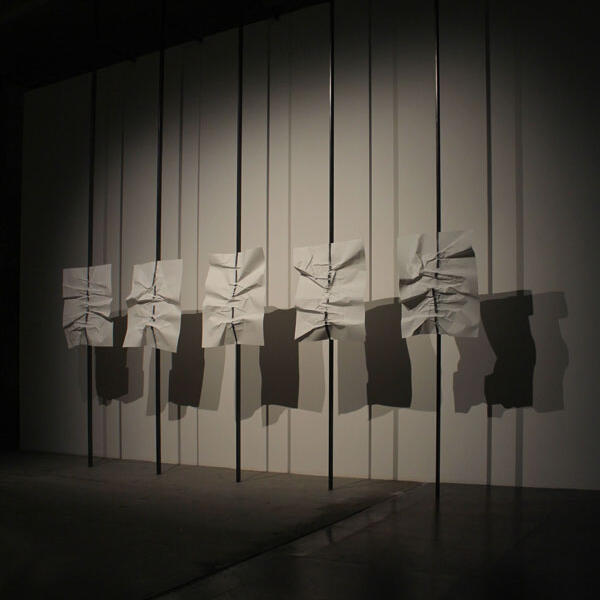 They are Ernesto Ballesteros, Ana Gallardo and Eduardo Basualdo. It is the latter that sits with me in a forgettable pub in the San Telmo neighborhood. He is the youngest of the three, he is thirty-seven, and he is going through a period of international visibility. We made the decision of getting to the point: to focus intensely on his works exhibited at the Biennial. To reach an acceptable depth, isolating them from the context of the event, and even dwelling on very few occasions on the possible relationships with his previous works. As if this pub, located 11,594 kilometers away from Venice, were an aseptic laboratory for understanding the object of study without any contaminants.

His presentation consisted of a constellation composed of five pieces: four in the exhibition space and an artist’s edition that he handed out personally. “In general, I work in my studio developing works that are similar to islands. I work intuitively with small and big concepts, and at the time of staging an exhibition I assemble a universe with them; that is when the story, which has an equal status with the other parts, takes shape. There is a touch of playwriting and a touch of curatorial work, although I generate the elements. They are concepts that linked to one another, structure one story or another. Enwezor invites me to show three pieces; the complicated part of the matter is that he does the same work that I do – linking pieces together – but not using one´s idea as the center. What he chooses is not necessarily consecutive and I have to balance it, and there is where I offer him Grito (Shout). It is a work that serves to organize the space; in any exhibition, if you do not organize your own environment, you are demolished.” That idea included in the first paragraph, referred to isolating the work from the context, now seems to be an arbitrary wish. The fact is that in a chaotic biennial, with labyrinthine corridors loaded with literalities, with good works by good artists but badly showcased; with no surprises or emotional manipulations, Basualdo’s first good decision was to protect the curatorial methodology of his work; to allow the curator to choose, but to have the last word so that nothing collapses: to be the one who determines the dramatic structure.

Grito functions as a wall to trap the viewer; it is a protective work that underpins all the rest. Precisely, it consists of five iron bars stretching from floor to ceiling. In their centers, they feature paper full of folds; paper crossed by a broken line in graphite, the same width as the bar. “How to find hidden spaces in a line and how to apply this in architectural terms. The pieces shown in Venice are practical exercises to test strengths we humans have to interact with the material world and modify it. In this case the question was how to break an iron bar using pencil and paper, and where to do it…this happens, from my point of view, in the plane of the imagination,” and he adds: “Reality becomes imprinted on certain folds, on certain structures that already hold certain traps, certain conditions which one ignores but which are there. The fold is already there, the territory is already conditioned, and the black line is your contribution.” Once again, the context: in a Biennial that is fundamentally pessimistic, where all those world’s futures are riddled with the violence of the present, with works whose strategies were the visibilization and direct denunciation of that violence, Basualdo appeals to a simple utopian basis, as if reminding us of what all this business of art is about: using the imagination, we can break reality. But he does not do so drawing rainbows. The iron bars are a support for the drawings, an architectural element, an underpinning but also an impalement for those drawings, or a prison grid – a typology already used by the artist previously. On the other hand, a clear violence is exerted on the material, the strongly marked line on paper forced to twist. “The paper is an X­ray, it becomes a lens through which we view that metal and we see it as a different state of matter, as in a dimensional leap. The Biennial spoke of the possible futures and the actions that we may exert on matter, the violence on the material is a way you have of building your own future. Of nor depositing it either in the hands of religion, or of technology, or of politics. What can you do to transform your environment? Violence is a component part of our creative engine. The work is finding out how to channel violence so that it does not destroy everything. I understand violence as something that is indisputable, a basic energy. In all of my works I seek and energy that may be in that state at the moment of exhibiting them, so that they do not represent solely a philosophical question. Violence makes you feel alert and it is a universal code, understood by everyone.” Basualdo’s works are clear and synthetic, but they are still endowed with a complex polysemy. Even if one should forget the narrative in Grito and move towards a self­referential reading of the visual language (the play of dimensions and materials, the relationship between topology and body, action and representation, drawing, sculpture, installation and architecture, among so many variables), the work, despite a pretended universalism, becomes riddled with a play of references for the Argentine spectator, above all local artists such as Lucio Fontana, Liliana Porter, Jorge Macchi or Luciana Lamothe, among many others.

While Grito is a protective work, it is in turn protected. Alba is its ideal companion: for an unprepared spectator, it rescues the former from a mere exercise of visual language to balance and return its narrative to it, expand its poetics. It is a wooden, free­standing door, which has been insistently sanded at the same point in both of its faces until it has been perforated. “If Grito´s tool is the imagination, that of Alba is touch; the insistence of a minimum, physical gesture made with your body that may come to transcend the material limits we are used to dealing with. The limit that is physical, like a door or a barrier, becomes a temporal one. Your power is measured by the time it takes you to cross it, not if you can or cannot, since you can.” Unlike the hard, straight and prison­like bars in Grito, the wooden door appeals to a more intimate and romantic poetics. To cross your own barriers with an other, to cross your threshold. “ Alba is only one, Grito is multiple; it is a collective, the rule is for everyone and the evolution is personal.”

The senses continue their expansion, and not only thanks to Alba. Cómo volver a casa (How to come back home) is as simple as a paper folded down the middle and a line drawn with graphite pencil that respects the crease left by the folding. “here, the physical fold coincides with the fictional. I tell you what I want to tell you. Intention and language go hand in hand. It is a question of how to adjust one’s wish. If the world is exactly the way we want it to be, we stop bothering with a lot of things, for example, with safety, the number of devises there are to control the body. Human do not naturally agree with one another. The law does not adjust to behavior.” Indeed, the world functions like Grito: if the law is a line, if it is that metal bar, for Basualdo, reality is the paper with its folds and interstices, sometimes visible, sometimes not.

The last two pieces, Amenaza (Threat) and Juramento (Oath) work on the performative power of the word, its capacity for modifying the environment from immateriality. Juramento is a drawing on paper in which Basualdo insistently goes over the cutting edge of the knife with his ball pen until the paper is broken. Juramento features the same procedure as the door: a representation that becomes real out of insistence. But its function becomes real. It is a performative language; language equates to a physical fact, like marriage, an oath or a threat. Therefore, how can the cutting edge of language be represented in order to modify something? The invisible cutting edge of language is not material, but it has an incidence on matter. You can modify behavior through words. Here I intended to lead the viewer towards looking at the knife to see if it was actually there: to look at the invisible, to look where there is nothing to see, to concentrate on that nothing.”

To see that which is not there, to find the interstices, to move onto other dimensional planes of matter without stepping on simulation. Basualdo’s constellation in Venice has conceptual clarity and aesthetic purity, as well as the ability to performatize what the artist pursues: to focus on that which is not perceived on the surface; to go beyond the visible based on contemplation and rationality. They are synthetic works without relinquishing their interstices, their hidden corners, and their complexities. They work on something that is necessary because it is inevitable and sincere (in the artist’s own words, on the drive to control that monster in which we are submerged).