Motion of a Nation

Gallery V.M.21 Arte Contemporanea is glad to host the works of thirty international and Italian artists, carefully selected by Antonio Arévalo, with the purpose of presenting a crosscutting view of the artistic scene. 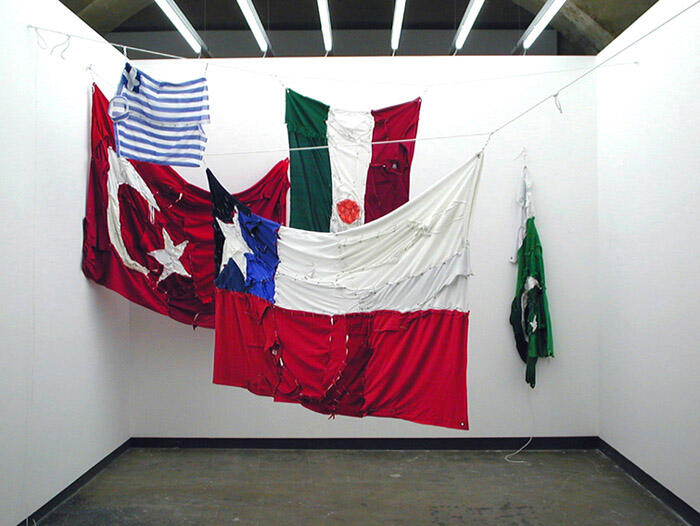 The location of the exhibition has not been selected randomly. I decide to use a private space as if it were public, in order to take distance from the art markets, and provide an opportunity to gather ideas and stories. By these words Antonio Arévalo's explains intention of some cultural institutions, notably galleries, to go beyond self-representation, and rather reinvent themselves through resistance, by articulating proposals and adapting aesthetic production to the present.

This show documents a unique path through one of the iconographical symbols par excellence, the flag. Motion of a Nation is hence a group of visual elements whose survival is mostly based on the value of symbols, by which history, its meaning and its distortions, can be narrated.

The first tricolor, raised during the French revolution, represents an absolute innovation. In a contemporary multiethnic perspective, in which movement generates crossbreeding, artists can manipulate their genetic code, change their homeland, or invent a new one, impact on imaginary and, aim to re-elaborate and combine diverse iconographies and national identities.

In this context artists from different nationalities and origin, tell their stories, the meaning and possibly the evils and distortions of an old symbol such as the flag. The do so using different media and techniques, from photography to drawing, to painting to digital imaging, from social networks to video making, intertwining high level knowledge with pop language, history and headline news, comics and poetry. The ensuing web of quotes and references blurs the borders between sentimental biography an sociological analysis; between literary memory and technological experimentation in a surprising and often ironic provocative game.

Show: Motion of a Nation curated by Antonio Arévalo