Melanie Smith is Representing Mexico at the 54th Venice Biennial

Melanie Smith (Poole, England, 1965) is representing Mexico, where she lives and works since 1989, at the 54th Venice Biennial with her show Red Square Impossible Pink, an exploration on the frame as the aesthetic and political limit of representation in art. In Melanie Smith's work the pictorial question on the frame as a limit has driven large part of her artistic research. By questioning the aesthetic and artistic practices of modernity - particularly the relationship between abstraction and utopia in Suprematism - this project works on the displacements and variations this utopia has produced in Latin American geo-esthetical emplacements. Thus, Smith tackles the issue of the transformation of utopias as artistic projections into heterotopias as productions of social and political experience in Latin America. 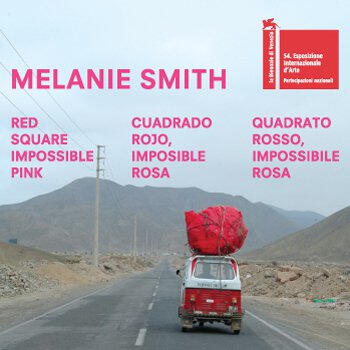 The exhibition gathers video, painting and installation. As a whole, it is conceived as an emplacement at the Palazzo Rota Ivancich in which a dialectical play between ruins and chaos is activated. The video pieces created in collaboration with Rafael Ortega explore three affections belonging to heterotopic modernity: delirium, compulsion and melancholy. Paintings function as spectral interventions to the exhibition space as a cipher of the artist’s gaze. The installation 379 thoughts on insubstantial subjects and matter, made especially for the Biennial, is an inconclusive dreamt archaeology of the social, cultural and political imaginaries of the artist. The objects are an indefinite displacement of meaning, operating in the same way as automatic writing and free association, dismantling the relations subjacent to the totality of the works that are part of the Red Square Impossible Pink project.

Aztec Stadium. Malleable Deed is an activation of the relationship between chaos and modernity. The piece consists of mosaics created by 3000 students from Mexican public schools, who compose various images from the history of art, such as Malevich’s Red Square, as well as from Mexican nationalist and even from the popular images of mass culture, such as the mythical wrestler Santo, wearer of the silver mask. The articulation of these imaginaries through chaos as social affection results in a delirious dismantling of the symbolic network with which the fictions of national and cultural identity attempt to be constructed in modernity.

Filmed in Lima, Peru as a project by the Museo de Arte de Lima, MALI, Package is an affective mass that fixates on different symbolic orders to disturb, interrupt and above all, hinder the flow and symbolic network of a variety of historical, political, social and economic registers. It represents the repressive phenomenon that molds aspects of post-colonial identity, but also a critique of national pride in an idealized ancestral past made up of a historical identities that overcome the valorization of contemporary reality. Developing from the video Package presented at the pavilion, a pink plastic “thing” occupies everyday places in Venice. Playing with the distracted perception of objects that is common in urban spaces, this action blocks, to the point of discomfort, the way of being in the city.

Las Pozas, a seductive and decadent setting for nature’s exuberance in the Mexican landscape, is the motive behind Xilitla: Dismantled 1. This film, shot in 35mm, calls into question the imaginary limits between modern and contemporary art practices. The surreal construction mechanisms that Edward James used to build his semitropical enclave are disassembled. By constructing it through visual and audio distancing from the natural landscape, Smith disassembles the modern gaze, which turns the exotic landscape into a screen and an image whereupon its own desire is projected.