Renowned Cuban artist Manuel Mendive Hoyo brings his exhibition, Things that Cannot be Seen Any Other Way: The Art of Manuel Mendive and a unique performance procession, “Water (Homage to the Waters)”, to the Patricia & Phillip Frost Art Museum at FIU. 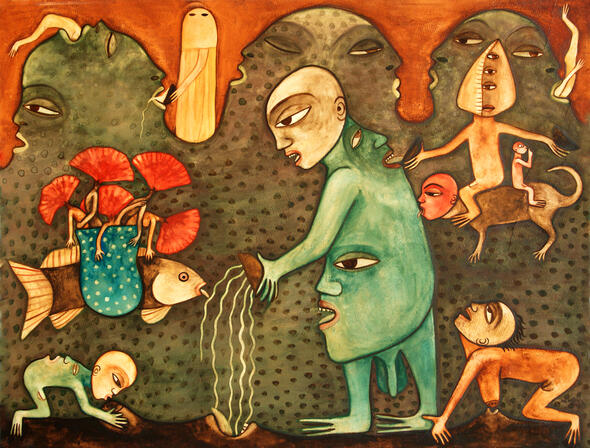 The exhibition, which runs through January 25, 2014, has been curated by Bárbaro Martínez-Ruiz, Director of the Orbis Africa Advanced Research Center, Department of Art & Art History, Stanford University.

Centered on the fifty-year career of this prominent Afro-Cuban artist, Things that Cannot be Seen Any Other Way: The Art of Manuel Mendive is the first in the United States to focus on Mendive’s long-time incorporation of the visual and material culture of the Afro-Cuban religion.

Born in 1944, Mendive attended Cuba’s national fine arts academy, San Alejandro. Now regarded as one of the foremost contemporary artists in Cuba and the Caribbean, he began his career in the early 1960s. Mendive paved new ground by moving beyond his predecessors’ reliance on mainstream Western art forms, such as Cubism and Surrealism, and incorporating visual elements rooted in the Yoruba historical religious and visual traditions of West Africa into his painting. A substantial body of literature has highlighted the religious references in Mendive’s work, yet little has been written of substance on the manner in which Yoruba themes were incorporated into the underlying artistic and religious philosophy, omissions this exhibition seeks, in part, to remedy.

The exhibition traces Mendive’s drawing, painting, sculpture, and performances from the early 1960s to the present, with special attention paid to certain themes common across his work, including religion, identity and memory, as well as the production styles into which his work can be categorized. In chronicling the iconography of Afro-Cuban art in conjunction with an examination of the influence of both Western and African artistic practices on Cuban art, the exhibition explores issues of creolization, hybridity and syncretism through the twentieth century to the present day. It also highlights the role played by politics of identity, race and resistance by African descendants in indigenous works of art.

According to Carol Damian, Director of the Patricia & Phillip Frost Art Museum, “Manuel Mendive unites man’s body to the earth that generated him, to the plants and animals, water and sky, to Mother Nature in which he is a creature among creatures, and in which he finds the reason, time and space of his very existence. It is a totalizing concept of art in which the pictorial mixes with that of the body and soul to reach an intense emotional height, where art and spirit reflect harmony and peace of mind.”

In all, the exhibition includes more than 50 of Mendive’s paintings, 4 of his sculptures and one of his tapestries, along with a mask installation. This exhibition is a project originally conceived by the Los Angeles Department of Cultural Affairs in association with The California African American Museum, the Patricia & Phillip Frost Art Museum at Florida International University, and Fundación Amistad; Bárbaro Martínez-Ruiz, Director of the Orbis Africa Advanced Research Center, Department of Art & Art History, Stanford University, is curator.

The central idea of the Waters (Homage to the Waters) performance procession was a reflection on the importance of water for the development of different cultures and their presence and symbolism for African, Asian and Western religions up to the present day, highlighting the need for this element to ensure the life of man and of nature; water as a central, vital energy, and as a living and eternal element. It attempts to tell the story of water as a journey that is developed by research relating to the subject from different philosophical, religious, cultural and social angles, proposing an anthropological vision that goes beyond the presence of water in a specific culture, such as the Yoruba culture which, in this case, goes to the essence of mankind, its feelings and its personal stories.

The performance procession began in the courtyard of the Graham Center building on the FIU campus, where a group of people who are in the audience told the story of water with megaphones in order to amplify their voices. These people act as old fashion minstrels that will repeat the stories, but in this case, using modern technological media. There were also actors, dancers and musicians who was listening or reading these texts during their procession toward a sculpture, “Aguas del río”, covered by a tapestry made by the artist. The tapestry was removed by the dancers and the sculpture was taken into the Frost Art Museum, and placed on a wall provided for this purpose.

The public programming presented by the Frost Art Museum is in conjunction with the Cuban Research Institute and the African & African Diaspora Studies Program at FIU. Funding for the exhibition and programs has been provided by Fundación Amistad; Cernuda Arte; Manny Kadre; PanAmericanArtProjects; the Farber Foundation; and the City of Los Angeles Department of Cultural Affairs.