In the spirit of the hemispheric exchange taking place at the forty-third regular session of the OAS General Assem­bly in Antigua, Guatemala, from June 4 to 6, 2013, the OAS’ AM A | Art Museum of the Americas presents “ Un Lugar sin Reposo | A Place with no Rest,” an exhibition of artwork from one of the host country’s finest artists, photographer Luis González Palma. 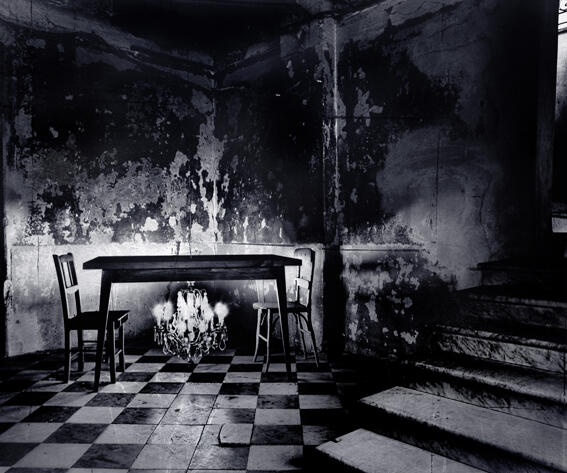 This exhibition furthers AMA’s mis­sion of promoting the Inter-American agenda through the promotion of peace and social change through the arts, while blending the artist’s examination of personal and communal empowerment.

González Palma examines the power of communication through the gaze and body language. Evaluating the ways in which people communicate, he calls on the viewer to consider how even the simplest glance can prove vital for the growth of interpersonal relationships and human interaction. The artist conceived of these photographs with the intent of the images to contain, highlight, and express the essence of communication. These striking images invite the observer to examine the ways in which we react to the world. He has constructed scenarios and images that allow for alternative perceptions of the world and other ways of understanding it.

The earliest works of González Palma focus on frontal portraits as metaphors. The subjects’ fixed and bold stares convey dignity and fragility. They are vulnerable and strong. His subjects are mainly Guatemalans, and their faces serve as mir­rors in search of mutual meaning.

Now, following a series of geographical and emotional life changes for the artist, and in collaboration with his wife Gra­ciela De Oliveira, González Palma has honed his focus on beauty as political power, religious experience laced with love and pain, and the conversation between a person and his or her world, in a society in which healthy bonds are scarce and emotions are complex. This recent series, “Jerarquías de Intimidad” (Intimacy Hierarchies, 2004- 2005) was produced in Argentina. The scenes are psychologically charged, providing a script through their titles across the gamut of these seemingly disconnected images.

The newest set of works in the exhibition is Bodyguards, from 2009. These male portraits are of the bodyguards of promi­nent Guatemalan families. The nature of their work can render them anonymous and invisible. They are protectors, and their presence by default signals safety while also indicating the threat of violence that makes them necessary in the first place. These portraits offer a far more direct pathway into them as individuals than what we are often accustomed to.

He received the Gran Premio PhotoEspaña “Baume et Mercer” in 1999 and collaborated in the staging of the opera production “The Death and the Maiden” in the Malmö Opera in Sweden in 2008. He has three pub­lished monographs of his work including “Poems of Sorrow” (Arena Editions, New Mexico, USA), and “The Silence of the Gaze” (Peliti Associati, Rome).