DOMINÓ CANÍBAL is an initiative by the Culture and Tourism Council of the region of Murcia encompassed by the PAC (Proyecto de Arte Contemporáneo de Murcia 2010) and curated by Cuauhtémoc Medina, in which each artist intervenes over what was previously accomplished. Through the intervention of Tania Bruguera, the following artists will participate: Rivane Neuenschwander (November 12) and (Francis Alÿs December 17). 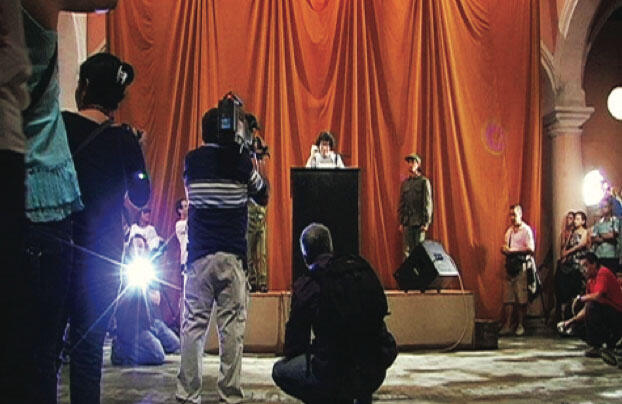 The curator Cuauthemoc Medina wrote the following text about the intervention of Tania Bruguera:

Tania Bruguera has described Huelga General as a piece about “the creation of community”, about participation, about citizen intervention and about the frustrated utopia that art represents through a permanent state (an image), and a process as changing as political and as unstable as public opinion”.

Making two political production traditions, that have been normally assumed to be incompatible, coincide (contemporary participative art and the tradition of the agitation mural that mobilized the renaissance art model to produce the most popular notion of “public art” of the 20th century), Bruguera wanted to put into question the social skepticism towards the relevance of public art, transferring the work of its realization an activation to the public scene itself.

In a space that will be presented in a state of process, Bruguera will establish the conjoined vision of a rural design for the Veronicas Wing that painters as well as the public will later complete. This shared task transfers, at the level of execution of the piece, the process that is usually external of the absorption of meaning that the work of art demands from its users. Contemplating the work will implicate- under the ironic Warholian model of “painting by numbers”- that the spectator will have to complete the piece. The piece will not be fully observable until it is finished, and its relevance will maybe enter a process of obsoleteness, to the point of having to be intervened by another counter initiative.

The connotation of religious space is in the plot of the historic plot incorporated in the intervention. “In a General Protest the work is made while it is represented; the element is public participation and the mysticism of political action” states Tania Bruguera-

Huelga General is an intervention where the internal rules of artistic production are intersected with the specific conjunction of its realization in the present. The plot of the mural as well as the succession of phases that the artists aspires to introduce in the realization of the painting, look to absorb a temporary circumstance: the convocation of the general protest with which, in the month of September 2010, syndicates, citizens, and activists aspire to put into question the series of economic politics and public finances with which the Spanish government wants to control the variables of the capitalist crisis.

To what extent are this mural, and its process, able to elicit a reflection of a moment of conflict? As a work of assumed circumstance, its reflexive and practical effect is an open question mark.