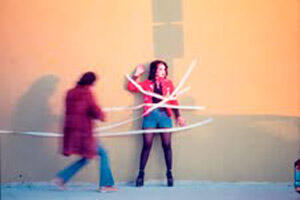 This exhibition is organized by the Los Angeles County Museum of Art (LACMA) and the Williams College Museum of Art, with support of the Andy Warhol Foundation for the Vi­sual Arts, the National Endowment for the Arts and the Robert Mapplethorpe Foundation.

Asco: Elite of the obscure, a retrospective 1972-1987 is the first exhibition to present the broad scope of work of the Chicano group Asco, that operated in Los Angeles between 1972 and 1987. The group of art­ists comprised Harry Gamboa Jr., Gronk, Willie F. Herron III and Patssi Valdez. Tak­ing their name from the arresting Spanish word for repugnance and nausea, Asco used performance, public and multimedia art to respond to socially and politically tur­bulent times in Los Angeles and worldwide. The art collective was active until the mid 1980s, and grew to include the artists Di­ane Gamboa, Sean Carrillo, Daniel J. Mar­tínez and Sandoval Teddy, among others.

Geographically and culturally segregated from the then emergent contemporary art scene in Los Angeles, and aesthetically dis­tinct from Chicano art movement, Gamboa, Gronk, Herron and Valdez came together to explore and exploit the media without con­ceptual limits. Creating art using any and all methods available to them, Asco fused activism with performance in a process that expanded the scope of Chicano art.

The exhibition, curated by Rita González and C. Ondine Chavoya, shows the vari­ous aesthetic and critical tactics employed by the group. It includes video projections, sculpture, painting, performance and docu­mentation, collage, postal art, photography and, in particular, their No-Movies: per­formances that invoke the formal codes of cinema with the aim of repeating their distribution and advertising strategies, but which are created for a still camera. The ultimate aim of the collective was to avail of its self-imposed exile in order to subvert the historical process that led to the idea of the Chicano as a blind spot for media and political and cultural institutions, and to create platforms of critical visibility for the Chicano community.