Intersubjectivity is one of the distinctive traits of the human being − simultaneously an individual and a social entity. In this sense, communication becomes the means of expression and sociabilization par excellence. 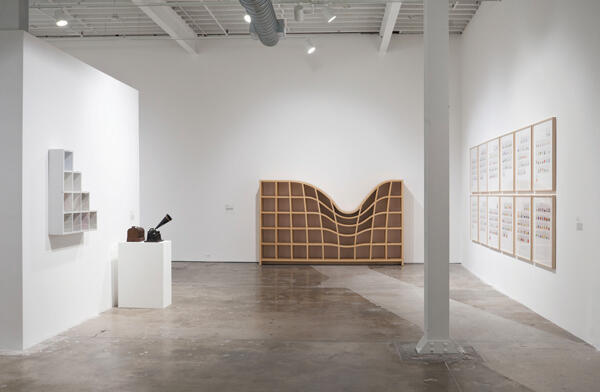 Comprised of 34 works by 24 artists, Unsaid/Spoken was a selection based on the Ella Fontanals-Cisneros and CIFO collections. The curatorial line which inspired the exhibit had its point of departure in the tension resulting from the communicational interstices where what is explicitly said gives way to unintelligible languages, silenced speech, forgotten tongues, intimate tropes and social revisions.

The Brazilian artist Tatiana Blass’ installation Metade de Fala No Chão- Bateria, an unusable set of drums and cymbals covered with molten wax opened the show. The wax that flooded the voids in the drums and cascaded stealthily onto the floor like a lament was a disturbing synesthesia on muted discourses and impossibility. Blass used wax, which by nature is a poor conveyor of sound, to highlight the tactile feeling of the muted sound, so dear to this piece. The installation’s title (Half the speech at the feet of the drums) emphasized absence, that which is yet unspoken and is an underlying element which will eventually reveal what has been said or is yet to be said, curiously visible and unintelligible at the same time.

In this respect, special mention could also be made of the proposals presented by Mira Schendel, Johanna Calle, Antonio Vega Macotela, Los Carpinteros, Ícaro Zobar and the duo composed of Angela Detanico and Rafael Lain. Starting from language structures such as typography and music, these artists created new and indecipherable meta-languages which demanded an active reading between the lines.

Detanico & Lain’s Benjamin Concentrated, pushed the limits of typography, taking this abstraction of language to an extreme that bordered on ineffectiveness. The piece was composed of 17 digital prints on paper, among them, Helvetica Concentrated, a version of the Helvetica Condensed typography created by Max Miedinger in 1957 and recognized as being highly legible. Detanico & Lain calculated the exact amount of ink required for each Helvetica character to be printed. The visually effective result was an alphabet featuring perfect circular forms differing only in their diameter. Wallter Benjamin’s famous essay, The Work of Art in the Age of Mechanical Reproduction, was the text chosen by the duo to be presented using the Helvetica Condensed typography .

Also worth mentioning were the proposals presented by Mark Dion and Rivane Neuenschwander, both working with the notions of serialization and classification. Neuenschwander’s Deadline Calendar displayed in the manner of an archive the 365 days contained in a year, each of them associated to the expiration day of a food product. The effective installation transferred the temporal axis of the progressive linear continuum to the imperative of daily expiry dates, making us aware of the numerous routine cycles in which life and death interact in a staccato manner.

With a strong social content, the works of Rafael Lozano-Hemmer and Leo Matiz appeared to be deeply related. Lozano-Hemmer’s Voz alta was a tribute to the fortieth anniversary of the Massacre of Tlatelolco, where the Mexican army opened fire on a students’ demonstration, killing and wounding dozens of people.

Conceived as a platform for public expression, Voz alta was composed of a loudspeaker placed in one of the buildings facing the Plaza de las Tres Culturas, and inciting the spectators to express themselves freely in the public square. In synchrony with a powerful light beam whose source was in a distant part of the city, it in turn activated other spotlights, becoming visible from every confine in Mexico City, while a radio frequency band transmitted the voices of the participants in real time. When there were no participations, recordings of the survivors accompanied by music of the time were broadcasted, as well as pieces of sound art commissioned especially to commemorate the anniversary of the massacre. The installation presented at CIFO was composed of the prototype of the loudspeaker-reflector and a video which documented the work and the public actions involved.

Leo Matiz’ (Colombia, 1917-1998) photographic ensemble Después de la manifestación, Caracas,Venezuela, was a documentary series with a strong evocative power. The photographs eluded the human body and traced instead objects abandoned abruptly in the midst of the turmoil, which made the spectators relive the violence of the event.

The exhibition included the works of Damián Ortega y Carlos Garaicoa, based on architecture as a language for the construction of utopias. Carlos Garaicoa’s (Havana, 1967) To Transform the Political Speech in Facts, Finally, was a photographic installation posing a reflection on impossibility and interrupted utopia. The panoramic views of Havana’s deteriorated buildings incorporated delicate wire filigrees making reference to a widespread popular decorative tradition based on colored threads and wire which, in the manner of embroideries, weave city views and buildings. Appropriating this tradition, Garaicoa created new architectural projects, highlighting the vacuity of the promises of the political discourse regarding the reconstruction and the future of the country by means of tangible structures which, outlined on the photographic paper, created a delicate fabric as an allegory of the interrupted project of modernity and the truncated utopia, which denounced the demagogy of the political discourse.

Samuel Becket’s piece Not I, which closed the exhibition, was a statement about the impossibility of the discourse to encompass everything. Conceived as a theatrical piece in 1973, it was later adapted for television. The fifteen-minute video reduced bodily expression to a mouth which engaged in and exhausted itself in and stumbled over a hurried monologue, exasperated at times, an imperceptible murmur at other times, dominated by the anguish of the speaker who strove desperately − and in vain − to convey the myriad emotions that overwhelmed him.