Reflected Visions of Argentina in Focus

The exhibition Argentina in Focus: Visualizing the Concept— Cristian Segura/Sergio Vega, curated by Alma Ruiz at the Art Museum of the Americas reveals the critical focus in the production of these two Argentine artists who, even belonging to different generations and living in geographically distant contexts, approach meta-artistic phenomena as the calling into question of the institutional or the stereotyped perception of Latin American art. 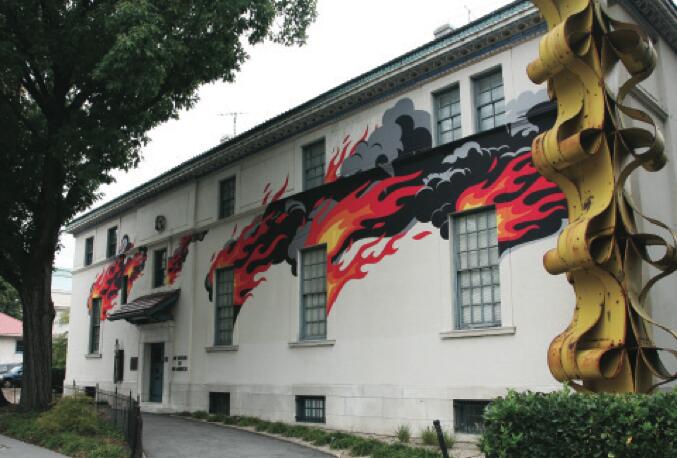 Sergio Vega was born in 1959, and he is a graduate of Yale University and the Whitney Museum of American Art Independent Study Program. He arrived in the United States in the 1990s, and he currently lives in Gainsville, Florida. In the installation Across the Corpus Callosum, he combines a carefully formal work and profound conceptual irony, which dates back to his research on the imaginaries concerning paradise associated to Latin America since the days of the first chroniclers. The discovery of a book by the Argentine author Antonio de León Pinelo, who situates the Garden of Eden somewhere in the center of South America, with geographic descriptions that eventually led the artist to Chapada de Guimarães in Matto Grosso, was a revelation: he saw the genesis of the stereotyped vision of the continent, whose shadow extended to cover the territory of Latin American art. That knowledge in which, as he remarks, “theology, fantasy, myth, and science” coalesce, did not only model the imaginaries of mirage of the continent of the days of the first colonialism, but it was also assumed by its inhabitants and nourished the imaginaries that distort identity to date.

As of his open-ended work Paraíso en el Nuevo Mundo, Vega approached the exoticism of the colonialist gaze that extended to art (scenes of coastal or sylvan vegetation, with their fauna and flora of incomparable colors and the relaxing atmosphere of a tourist brochure), subverting it through a unique strategy: to duplicate the mirrorlike reflection of that vision and make it explode from within. Convinced of the fact that “there is no escaping from the stereotyped vision of Latin America,” he incorporated in his work the expectations of the colonizer, only to make him a witness of its de-construction. As Paulo Herkenhoff suggests, “Nothing combines naïvely in this space without Rousseau’s good savages (...) His placid Monet garden contains piranhas and the eyes of a cayman check the fluctuations in the stock exchange.”

In this respect, his work is specular in two senses: It allows us to look at ourselves as Latin Americans in the mirror through which we learned to see ourselves and break it and it allows the “other” the observer who comes from places that are geopolitically and culturally dominant to reflect on his/her way of approaching Latin American art. It references receptivity.

Vega could not have chosen a more exact image to explain the construction of the self-image of the “Latin American”, associated to Lacan’s mirror theory, as Herkenfoff remarked with regard to another work, than the parrot. Lacan posits that identity is structured in the gaze of “the other”, and that in like manner, the unconscious is structured as a language. The exoticist image of Latin America, epitomized by the parrot, not only corresponds to the exotic beauty of its feathers which contain the whole spectrum in the color chart, but it also plays with the fact that the parrot is the only animal capable of speech, although its chatter is specular: it only duplicates the heard discourse.

The brain’s corpus callosum facilitates the communication process. In the work that bears this title, when confronting the parrot speaking into an institutional microphone (imposed language) and the formal abstraction of the colors of its feathers (a subversion of the prototype) in a sampler on the wall, we are making reference to the structuring of the stereotypical discourse on the Latin American, deconstructed not on the basis of an elusive strategy, but of appropriation. The expected discourse, the reflected discourse, has introduced a disturbing, untamed element. The parrot’s positioning inside the institution suggests another mode of empowerment.

For this exhibition, Vega also created Shanty Nucleus after Derrida 2 (Barraca nucleus después de Derrida 2, 2010). The yellow panels reference the work through which Helio Oiticica attempted as Ruiz explains “to redefine painting as an interactive exercise,” and explore alternatives to detach it from the support affixed to the wall and project it onto space. Vega appropriates the work and infuses into it his urgency to endow the photographs displayed on the panels with three-dimensionality. Strictly speaking, the volumetric element in these images only exists in terms of the spectator’s movement, but its content brings to the forefront a mode of social violence whose perception is usually based on custom: extreme poverty. Those sad panoramas of slum dwellings that sway above our heads and are not only the invisible aspect of the stereotype but also the anti-Eden, suggest an unbalanced continent.

Cristian Segura was born in 1976; he lives in the small city of Tandil, in Buenos Aires province, where he pursued an institutional career that led him to direct Tandil’s Municipal Art Museum at the age of 23, and to place it on the map. Two years later, when he left the museum, he carried a suitcase that could be easily mistaken for according to Ruiz an executive’s attaché case, but whose formal content was a recreation in cardboard of the museum floor plans covered in metalic paint and whose conceptual value was revealing: the Briefcase of a former museum director contained the disenchantment produced by the institutional world. The ensemble of his work shows signs of extra-artistic factors that may have an incidence on the entry, hosting, and conservation of the works, as well as on the life of the institutions it represents, haunted by different kinds of nightmares. Beyond the inevitable association with the Boîte-en-valise, in which Duchamp placed reproductions of the works he would smuggle during the Nazi occupation and that plays genially with a version of the portable museum carried by its former director in a transportable size, the piece pays tribute to the passage through Tandil of Víctor Grippo, whose work was reviewed in the local newspaper in 1958 and about whom Segura published during the last stage of his career as a museum manager “Victor Grippo. Reunión Homenaje”. Indeed, Grippo’s work Valijita de Panadero: Harina + Agua + Calor (excesivo)” (A baker’s small suitcase: Flour + Water + Heat (excessive)”, (note the key similarity with the title chosen by Segura) produced in the midst of the military dictatorship, contains an allusion to the excesses of power. In this way Segura connects his work not only with memory but also with the critique of the present. That type of disturbing inquiry referred to the institutional continues in works such as Un patrimonio protegido (2005), or the Juan B. Castagnino Museum in Rosario (2006). In that first work, the edition of a book titled precisely thus by Fundación Antorchas Publications, of this same museum, is partially transformed into confetti, which leads us to a completely contradictory image, to a curious oxymoron: a piece that negates its own title. In the second, three stacked museum books are used to cut out with remarkable precision the maquette of the institution. The play between destruction-construction is ambiguous, and it does not exclude a homage to an editorial effort. Besides Incendio, an intervention outside the Art Museum of the Americas a literal painting suggesting the possibility that the flames threaten the building and the fragility of art itself Segura created the work Antes de una exposición. Through a vision that is once again meta-artistic, self-reflective, he presents the video describing the itinerary of an artwork from the moment it leaves storage until its installation in a room that functions as a duplicated setting, for it has been built in the manner of a wood block, inside a museum gallery, as a reflection of the installation in reduced dimensions, and leaving traces (a ladder, a jar of paint) like the ones that the collective Guyton/Waker or Mateo López leave on the very process of creation. The specular, whether it involves reflection of stereotypes and identity, or of institutional frameworks or of the process of spatial installation within institutions, marks a disturbing exploration in the artistic practices of artists belonging to different generations like Sergio Vega and Cristian Segura, devoted to rethinking contemporary art.

Dani Levinas, the organizer of Argentina in Focus, has formed together with his wife Mirella a collection of contemporary art that is contributing to forge a still incipient vision in Washington, the political epicenter of the United States: the need to establish a dialogue between artistic creation from Hispanic America and the art of North America and the rest of the world.

In this city, save for some exceptional cases, Latin American artists continue to be peripheral. As Levinas points out, their presence in museums or public collections “appears to have been frozen in time.” It does not only tend to be restrained to some modern creators from the continent or to Chicano art, but public recognition is reserved for iconic figures such as Rivera and Frida Khalo.

In Levinas’s opinion, it is pressing to expand the space granted to Latin American contemporary art in a city that is far from the achievements not with-standing what is still pending attained in cities like New York or Houston. And he is determined to contribute, through his collection and/or his support and management, to the incorporation of Latin American art in the ongoing rereading of art history and to put emerging or mid-career artists “into focus”, as has just occurred in the Art Museum of the Americas. In the 1980s, when Levinas acquired one of the first works for his collection, Pan, by the conceptual artist Victor Grippo, the universe of the Latin American ended for him on the borders of Argentina: Liliana Porter, Oscar Bonni, Marcia Schwartz. But when he emigrated to Washington, he did not only begin to collect work by artists linked to that city, like Leon Berkowitz, and at a later stage, Bernardi Roig, Michelangelo Pistoletto, Matthew Barney, Roni Horn, Maurizio Cattelan and Zila Leutenegger, but he also rediscovered the south of the continent from outside.

He was fascinated by a cultural universe that breaking stereotypes attributed to Latin American identity manifests itself with particular strength in its contemporary art. He acquired works by Brazilian artists such as Meireles, Tunga, Waltercio Caldas and in addition to incorporating new works by Sandra Cinto, Marepe, Barrao, Iran do Espiritu Santo, Regina Silveira, or Edgar de Souza, he began to purchase works by Spanish artists like Juan Muñoz or Javier Arce, by the Cuban-American Jorge Pardo, the Mexican artist José Dávila, Colombian artists María Fernanda Cardoso or Gabriel Sierra, the Venezuelans Arturo Herrera or Jorge Pedro Núñez, the Chileans Alfredo Jaar and Iván Navarro, or the Argentine artists Marcaccio and Jorge Macchi, among others.

Proof of his interest in the artistic dialogue among peers from geographically distant regions is the adjoining position of the plates featuring images of cigarette butts created by Damian Hirst (Home Sweet Home) and Muniz -Above the Sea of Ashes, (after Casper David Friedich). His interest in transforming Washington some day into “a Kunsthalle that hosts the art of regions ranging from Canada to Argentina, and a space open to the recognition of Latin Americans living in any point of the planet” is related to the spirit of passion and beauty that animates a sui generis work by Muniz: : Drunken Duel (1991). The instructions for the duel are precise;”When you choose a weapon, choose the most beautiful one. Support that for which you might die. Walk in the most convenient direction. Think about the good things[...] Count your steps and forget all the rest.”