In the Air: the 17th Paiz Art Biennial.

Almost a year ago, the curatorial team of the 17th Paiz Art Biennial embarked on a process that would eventually confirm the winds of change which had begun to blow in the previous edition, and which materialized in the Guatemalan show that closed recently. “Seeing is believing” was the main title which, subdivided into four themes, not only proposed a flexible but vigorous scrutiny of the works, but also alluded to a process of change that was as long-expected as it was necessary. 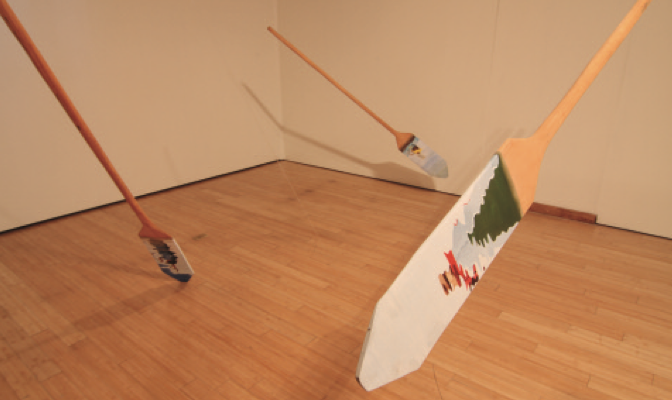 Indeed, the figure of the jury was finally replaced by that of the curatorial committee, the production fees were raised, and the idea − not at all a new one, by the way − of featuring a thematic and curated art event, became a reality. Also, acquisition prizes, still present, to make matters worse, in circuits in a process of maturing were eliminated, and the publication of a catalogue consistent with the event was planned. I like to believe − although this remains to be corroborated conclusively− that there has been an improvement in the overall quality of this event, which has maintained its relevance in the Guatemalan art scene for thirty-two years.

“Seeing is believing”, the well-known statement attributed to St. Augustine of Hippona but more commonly associated to St. Thomas the Apostle’s incredulity regarding Christ’s wounds, responded to a series of speculations about contemporary art in Guatemala. On the one hand, it addressed the undeniable religious heritage in the country’s artistic production, but above all, the latent tension − and its subtle presence in art − of a society whose very notion of “faith” is undergoing a process of mutation. It is no secret that the balance of power among the different churches, in the country and in the continent, is changing, and as might be expected, this is eloquently reflected in the culture and the environment. The city is flooded with billboards featuring messages autographed by God, the same god that sends text messages to the mobile phones of believers for a reasonable sum of money, or reminds us via ubiquitous stickers of how necessary it is for us to be born again... But irrespective of the religion we profess, what is clear is that the notion of faith itself (as is usual in times of crisis) is up for consideration.

However, the discussion about faith could be stretched further. Based on a revision of modernity and its sequels, one can easily conclude that it is not only religion that is being called into question. The same happens with personal convictions, the values that govern our systems, and the certainty that we are in the right place. The uncertainty that arises from the generalized instability does not only affect the way in which we relate with our mystic side but also our structures of thought and of order, in general. Thus, the attitude with which the world and Guatemala present themselves before −the becoming of − history, and before themselves, appeared to be a suitable angle from which to sound up a society that, for reasons which are too long to enumerate in this brief article, now finds itself in a kind of impasse. In the air. With no direction.

And in a parallel way, this condition and this process are also latent in art. On a general level, the traditional presentation systems which governed the activity for centuries is in crisis. Besides, to consume art, let alone becoming involved in its creation, production and presentation, is often a true act of faith, of believing in its structures, its tools, and also its forms, implications, and multiple possible functions. Not to mention the process − in many cases, already assimilated − of moving away from the notion of the artwork as fetish, a concept that still persists in our national context.

Now then, the abovementioned presupposes a contradiction with the concept of faith itself: the need to see in order to believe in something that cannot be seen, just like in the processes of change, in which one may distinguish the results but not the process from which they are derived. This relationship, sometimes paradoxical, other times analogous, gave rise to four areas which would group the work of thirty Guatemalan artists and seven international guests. “Blind faith: contemporary images and rituals” (analysis of popular icons, mystic synchretisms, and public and private gesture) included such vigorous works as Punto ciego (2010), by Regina Galindo. “Look again: reconsidering the art object”, an approach to contemporary sculpture in the local milieu, oriented towards a revision of the processes of resignification of the industrial and everyday object, a strategy widely employed in Guatemala and prolifically developed by artists such as Ángel Poyón. “The trap for the eye”, an updating of the tradition of trompe l’oeil, revised the status of the image in an era of simulation, through works that constituted individual units from a formal and a conceptual point of view, such as Manuel Chavajay’s Viaje al paraíso (2010); and “Mundos Imaginados” (“Imagined Worlds”), a collection of utopias, dystopias and other reflections about the world and about life, magnificently exemplified by Alfredo Ceibal (Akua: Mundo y sociedad de voluntarios, 2010).

From among all these works “linked together” by these four lines which, in turn, interwove the five exhibitions (in five different venues, located mainly in the Historical District in Guatemala City), 6 artists were selected to participate in the Biennial of Visual Arts of the Central American Isthmus, an event loaded with good intentions, but just like the Paiz Biennial, with a whole process of maturing ahead of it and with a role as a rallying point for the winners or selected participants of the local biennials of each country of the region. With works that oscillate between poetry and documentation, the Guatemalan delegation was comprised of Regina Galindo, Jorge de León, Alberto Rodríguez, Manuel Chavajay, Alfredo Ceibal and Yasmin Hage.Underlying almost the totality of the material was a notion of revision of the event’s own context and a will to “create fate”, which on the whole, brought to mind the thought of that moment of pause, that need to take a breath in order to resume the journey.

But one swallow does not a summer make, and the Paiz Biennial still has a long road to tread. The theoretical event,although interesting and illustrative, could have permitted an in-depth discussion on the subjects of the Biennial’s concern on this occasion, extending the dialogue to other sectors, inquiring further into certain crucial areas. The documentation center was an idea that could not be implemented, and the production in general will have to polish its mechanisms. Now one must wait for the right conditions to make a complete evaluation, provided, of course, that the Paiz Art Biennial remains in the air and sets out on new flights...