No Giving In
By Alicia Haber

A fundamental artificer of the birth of geometric abstract art in Uruguay, painter and sculptor Maria Freire (1917) continues to be one of its select representatives. She formed an artistic team with her husband, José Pedro Costigliolo (1902 - 1985), and the two of them led one of the most relevant art movements, which originated in the 1950s, continuing its development under different modalities over time and through the expression of diverse Uruguayan creators. Planar art, cubism, African Art, were present in her training as a way of approaching art removed from traditional representation. She studied at the Círculo de Bellas Artes under Guillermo Laborde, an advocate of Planar Art, a Uruguayan movement that synthesized forms and resorted to color planes to maintain a frontal perspective. Later, Freire admired Cubism and African Art, and she became oriented towards abstraction. Remarkbly, already in the 1940s she had created a series titled “Abstractions”. 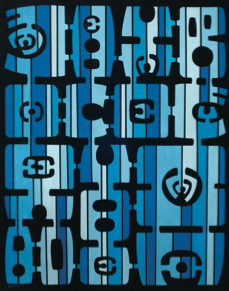 Her complete detachment from the referential occurred in the 1950s, when she embarked on geometric abstraction. Her affective and professional relationship with Costigliolo was fundamental at this initial stage of detachment. Through this relationship with her companion and colleague, many years her senior, her attraction to geometric art gradually increased and she became thoroughly familiar with its precepts.

Already in the 1940s, Costigliolo had begun to become acquainted with the different constructivist and neoplasticist trends through intense readings. He was fascinated by the ideas and compositions of Kazimir Malevich, Vladimir Tatlin, Nahum Gabo, Nikolaus Pevsner and El Lissitzky. He found the counter compositions of Theo Van Doesburg, who issued a manifesto in 1930 defining the characteristics of Concrete Art so attractive for Costigliolo particularly interesting.

In the early 1950s, Costigliolo initiated an openly geometric line of creation, in which the referent had been discarded and composition was governed by orthogonality. When he met María Freire, he was already treading that path. From then on, they held intense dialogues on the work and theory of their admired European abstract artists, a dialogue that continued over decades. Despite the fact that they were a collaborative couple, Freire and Costigliolo followed their own expressive paths, always faithful to geometric abstraction. María Freire ́s signature style was unmistakable. And the way in which she maintained her independence as a creative artist being so close to a personality as renowned as Costigliolo, in a world in which women artists did not yet play a leading role, is really remarkable. Thanks to her passion and strength, her eminent companion did not outshine her, nor did he exert an influence–consciously or otherwise– on her very personal expressive language, in spite of the tendency of the milieu and of prevailing prejudices in that direction. María Freire is also an example of autonomy to be considered in gender studies in Modern Art.

In 1952, an event that would be important for Freire–the First Exhibition of Non-Figurative Art– took place. It gathered together a group of painters and sculptors who were trying to create an essential, non-referential art. María Freire and Costigliolo showed in a wider context. In 1953, a much larger number of creators exhibited work defined as “Non-Figurative Art”, and Freire and Costigliolo were among them. By 1955, there were already “19 present-day artists” exhibiting at the Municipal Salon, Freire and Costigliolo among them once again. From that group, only Costigliolo, Freire and Antonio Llorens continued along a Neo-concrete or Neo-geometric line with consistency, rigor, and persistence, without yielding over the decades.

The 1953 Sao Paulo Biennial was another landmark. Already inseparable, Costigliolo and María Freire were dazzled by what they encountered in Sao Paulo, were they had a first-hand contact with the work of Piet Mondrian, Theo Van Doesburg, and Friederich Vordemberge Gildewart. Freire, who had begun to produce geometric works, had the chance to appreciate a great selection of contemporary art in the unforgettable 1953 Biennial. She always makes reference to the strong impact the paintings by Vordemberge-Gildewart, the creator of Absolut Art, the most important pioneer of concrete art in Germany, had on her. That visual enrichment was later complemented by trips to Europe, and by a thorough training of which Freire ́s previous art history studies were an important part. The artist was an art critic for “Acción” newspaper (1962-1973), and she also taught Art History. There was, at the same time, a Río de la Plata region zeitgeist (spirit of the time) to which she was not alien as far as geometric abstraction and concrete art were concerned, and which had a strong presence in Sao Paulo, Buenos Aires and Montevideo. In the case of sculpture, she was in the vanguard when it came to the use of new, non-traditional materials proclaimed by those movements. Freire also established a friendship with Uruguayan fellow artist Rhod Rothfuss (Carlos María Rothfuss, Montevideo 1919 -1969), one of the founders and a significant theoretician of the Argentine Madi movement, who taught art in the Uruguayan city of Colonia del Sacramento, where they talked about art. She was a High School Drawing teacher and a professor of Art History and Culture at the Faculty of Architecture in that city. On the other hand, she later established a long-lasting friendly and professional relationship with Argentine artist Gyula Kosice, also a key figure of the Madi movement, who was always very close to Uruguayan artists. There was even a Madi chapter in Montevideo, but it did not last long. In the early 1950s, Freire created constructions without volume which she herself described as “Madi”, although she never officially became a member of the group and remained a practitioner of concrete non-figurative art.

All these initial stages contributed to define Freire ́s distinguished series, through which the artist made a unique and idiosyncratic contribution to Uruguayan abstract-geometric art. Freire practiced the arts of painting and sculpture in the course of her extensive trajectory, and she always structured her work in series.

A great formal depuration was the hallmark of the first paintings from the early 1950s. Geometric shapes such as the square contrasted against a completely planar background. Freire created squares in different sizes which interpenetrated in a dynamic way based on their oblique placement on the planar surface of the work. In other canvases, delicate lines on a homogeneous support achieved through the use of pyroxylin lacquer stood out. These are among the most notable works in her career, inscribed within an aesthetics based on elementary and pure relationships. From that moment on, her work experienced mutations.

“In the series ́South America ́ and ́Capricorn ́” - Freire comments- “I felt that artists cannot be the slaves of an idea, a trend, nor can they be unfaithful to the transformations of their thinking, their feelings, their conceptual attitude. It was at that time that I became fascinated with the sign as an expressive and pictorial element. The sign as an actual thought, a signifier in and by itself.” Vital feelings and postures became very important for her at a given stage in her life, and this thought conveys that notion. She felt the need to adopt a symbolic element that might express them: with this aim, she approached a symbolic language as of 1957, and she resorted to this language in the series South America and Capricorn. Hers are very refined signs radically removed from natural referents. They undergo subtle variations: occasionally, they are repeated as a module, but there are times when they cover the whole visual field of the work with intensity. Using acrylic, Freire created very smooth surfaces fit for an art based on pure forms, and geometry was vitalized through recourse to curvilinear elements that drew the artist away from the austerity of the early stages of her career. Capricorn features the sensuality of the curved line, and the artist herself associates it to Maori art. From then on, color plays a predominant role. Interested in op art, at a later stage Freire was permeable to some of its postulates and created vibrant visual structures that played with light and the effects of subtle chromatic light variations in her works of the 1970s and 1980s. This period corresponded to her series Córdoba, Vibrant and Radiant, when the sign disappeared as such to become light - color- energy, demanding a more intense activity on the part of the spectator. The rigorousness of her early series, which had been gradually decreasing, now disappeared. The 1990s witnessed the return, with renewed energy, of a powerful symbolic language imbued with vibrant color. Within the abstract- geometric line, Freire is a tireless researcher.

María Freire has made a singular contribution to South American concrete art, highlighting the smoothness of its surfaces and the purity of its sculpture, later to become a pioneering champion of kinetic and op art.

Today, the artist declares:”at the end of my career, all I wish is that my passion does not become extinguished and that I may bring my work to a conclusion with the same conviction and commitment to excellence that have always been a part of it.”

Maria Freire was born in Montevideo on November 7, 1917. From 1938 until 1943, she studied sculpture and painting at the Círculo de Bellas Artes, Universidad del Trabajo. After obtaining the “Gallinal” Scholarship in 1957, she traveled to Amsterdam and Paris. She has been a professor of Art History and Culture for students of Architecture, and she taught Drawing in secondary schools. She was an art critic for “Acción” newspaper from 1962 until 1973. In 1952 she co-founded the Grupo de Arte No Figurativo together with José Pedro Costigliolo. Between 1954 and 1992 she had 17 one-person exhibitions in Montevideo, Sao Paulo, Rio de Janeiro, Buenos Aires, Barcelona, Brussels and Washington. Between 1953 and 1972, she participated in different group shows, and national and municipal visual arts salons. Most noteworthy is her participation in the 33rd Venice Biennial (1966); ́Four Latin American Painters ́ (Sao Paulo, 1980); ́From Torres García to Soto ́ (Washington, 1992); ́Latin American Art ́ (London, 1996), among many others. The awards with which she has been distinguished include the Grand Prize at the Sao Paulo Biennial (1957); First Prize (Watercolor) at the National Salon (1961); Free Theme Award (Drawing) at the National Salon (1964); Grand Prize for Painting, National Salon (1968); Grand Prize for Painting. 7th Spring Salon, Salto (1978) and Figari Award (1966). Maria Freire ́s works are represented in museum collections in Uruguay, Brasil, USA, Spain and the United Kingdom