Karina Peisajovich’s dazzling and surprising light interventions construct spaces and speculate about their perceptive possibilities; they address concerns associated to vision, to the direct relationship between the image and the eye. “My work is linked to the modernist experiments with abstraction and perception and to my early training in painting and underground theater. From the theater I appropriated some scenographic elements such as space and light, which when translated into visual language, gained importance and became the substance of the work,” Peisajovich affirms. Space, light and color characterized her beautiful most recent exhibition, the RGB / CMY project (2011) which, with its fascinating brilliances, made it possible to feel the physicality of light, and impressed visitors attending the “U-TURN Project Rooms by Mercedes-Benz” section at the arteBA fair in Buenos Aires, presented by Vasari Gallery and selected by curator Abaseh Mirvali. It featured the projection of six rectangular color light beams on a mural painted in different tones of pigment color; its dimensions were approximately 1.50 by 3.50 meters, in an exhibition space of 6 by 7 meters. 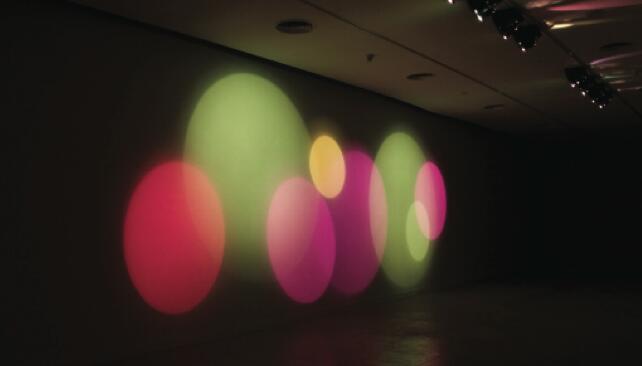 The colored space created by Peisajovich stimulated dynamic sensory responses; it invited the viewer to enjoy the seductive connection between light and form rather than decipher the title of the piece, RGB / CMY; which alludes to the RGB additive light model (initials of red, green, blue) in which the mentioned colors are added together in various ways to reproduce a broad array of colors, and to its fusion with CMY (cyan, magenta and yellow), the tones of the pigment color model, which are subtractive and result in neuter tones. “In my work, I superimposed those color schemes − the colors of light and the colors of pigment − which mutually affect one another. Color combinations are never repeated; they are not the result of an interest in an aesthetic-chromatic proposal but are produced randomly by the incidence of the changing light color (the source of which is the projectors) on the tones painted on the wall,” the artist explains.

In Peisajovich ́s work, her interest to continue inquiring into color, which has remained a constant since her first painting exhibition in 1996, coalesces with her curiosity about painting also with light; after working for over twelve years with light and electrical materials, she knows more about technical matters than a professional electrician. “The work itself is the research,” stated the artist in the 1990s, and she continues to enjoy color and illumination, the moment of creating, of mixing, and shows identical pleasure when handling the consistency of fresh oil or the immateriality of light.

Peisajovich presented her first experiments with light in 1999, once she had already become well known for her gigantic pictorial renditions of self-portraits, her objects in acrylic, her set designs and wardrobes for the theater. In the basement of the Belleza Felicidad Shopping Mall (Buenos Aires), she exhibited Lights, slide projections featuring abstract images and different light devices which inaugurated the path she is currently treading, playing seriously with light and darkness in installations that invite the viewer to walk through them and reassess their certainties about what is real and what is artificial.

After years of study, of insistence, and of artists residencies abroad, the remarkable refinement the artist achieved in her creative procecess could be verified in Ogród (2004, Lodz Biennial, Poland), and in analogous installations which showed the result of the interaction between the architectural and the represented space. In this light and painting installation, everything seemed to be visible (cables, light devices, paintings), but thanks to Peisajovich’s talent, the work appeared as an attractive and enigmatic landscape, a composition containing geometric forms and parallel yet converging lights which provoked the eye, vanished away and vibrated with the strategically disseminated brilliances. Indeed, the light vibrations whose tones changed slowly thanks to a series of devices which included color filters and a voltage regulator were central in the magnificent installation Todas las imágenes del mundo (All the images in the world) (2006), exhibited in Illuminations, as part of Malba ́s (Buenos Aires) Contemporary program. The varying intensity of the light and the successive alterations of the energy supply inaugurated a new territory where the viewer could discover particular modes of movement which reinforced the notion of an architectural space...an inner space? The flashes of lightand the shadows, with their disorienting depths, and the interaction with the spectators, with their physical presence and their lingering gaze, contributed alternatively to the formation and the dissolution of new spatial structures, forms and objects. Dazzling and delighting, the glitter of the installation Cascada (Waterfall) (2006) appeared sporadically, as in a celebration, through successive sparks, also produced by the programmed variation of voltage regulation.

Concrete and ethereal, Figura rosa (Pink figure) (2009) was distinguished with a Third Prize in the discipline of Visual Arts awarded by Fundación Andreani, and exhibited at the Emilio Caraffa Museum in Córdoba, Argentina. In this work featuring a wooden frame trimmed in the manner of Madi art, Peisajovich did not paint with light the entire surface but colored a “light frame”, impressive and alluring due to its large dimensions (74.8 x 31.5 x 2 inches).

Peisajovich also staged her meditations on color in Teoría del color (Color Theory)(2010), a constellation composed of 14 small drawings in which she utilized forms that appeared in conjunction with different models, harmonies, color spaces, chromatic circles. They were presented at the Recoleta Cultural Center, in the exhibition hall adjoining her hypnotic installation Máquina de hacer color (suite para ocho movimientos) (Color making machine - eight-movement suite), 2009, in which the artist’s vision was represented by the projection of color light emanating from eight lighting contraptions and round shapes which, when connecting at intersections, floated, fused, dissociated themselves, danced, and composed a silent symphony. The chromatic cadence may well be associated to the intense and early interest in music shown by the artist, who used to play the drums and even dreamed of forming her own rock band. Peisajovich created a new version of the same work (Color making machine five- movement suite), projected on this occasion on the ceiling, for El Eco Experimental Museum, Mexico City.

While she prepares two solo shows for 2012, at Alejandra Von Hartz, Miami, and Vasari Gallery, Buenos Aires, Peisajovich continues to paint with light and pigments, convinced of the fact that in their mutual contamination they mask their origin so as to create new worlds, and arouse wonderfully unexpected aesthetic sensations and poetic feelings.