Metaphors for that which society condemns to oblivion
By Carolina Ledesma

Art does not reproduce the visible; rather, it makes visible. - Paul Klee

Javier Téllez inscribed his name in the history of contemporary art in Venezuela when he transplanted the sinister atmosphere of a psychiatric institution to the spaces of the Museum of Fine Arts in Caracas. The Extraction of the Stone of Madness (1996) was the manifesto against invisibility by means of which he irrupted into the art scene to call into question the canons of societies that subjugate that which is different. 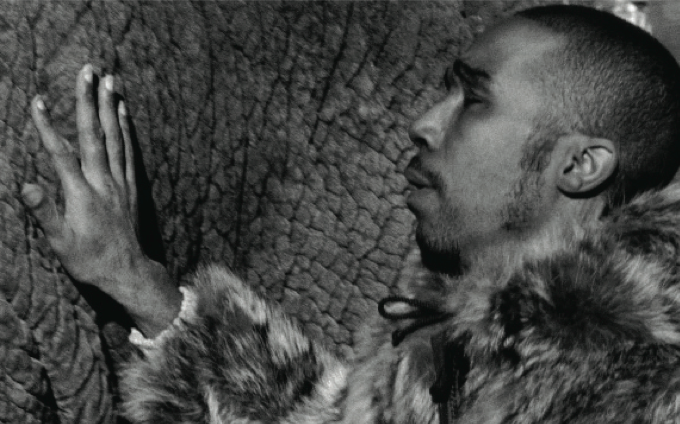 Born into a family of psychiatrists (both his parents were disciples of the Spanish professor Dr. Juan José López-Ibor) and intellectuals, this Venezuelan video installation artist has structured his discourse around his childhood memories and his visits to the Bárbula Psychiatric Hospital (Valencia, Venezuela), where his father used to work. “A man ́s true homeland is his childhood,” he says, quoting Rainer María Rilke. “I think that the fact of having grown up in daily contact with mental illness led me and my siblings to question the notions of normality and pathology from an early age”. In his voluntary exile in New York, he lives surrounded by books just like he did in his family home. His parents treasured “the most important library in Valencia”, which included close to twenty thousand books. “Reading extends one ́s own life experience and makes communication with other lives, present and past, possible.” On one of the shelves in the Long Island City studio, a dozen books on Italian writer and filmmaker Pier Paolo Pasolini reveal his importance—shared by that of Robert Bresson and Jean Rouch—as the cornerstone of Téllez ́s cinematographic work.

Thirty-nine year old Téllez has always lent his voice to those who are in the shadows, and launched into the air, in the words of Mexican critic Raúl Zamudio, hand grenades wrapped in velvet. “In my artistic practice I strive to offer ́visibility ́ to people and discourses doomed to invisibility within the social context”.

This profound approach to the issue of marginality and the pathologic –which, according to curator Gabriela Rangel, is seldom found in Venezuelan art – is exemplified in two of his most recent works: Letter on the Blind For the Use of Those Who See (2007), exhibited at the 2008 Whitney Biennial, and Oedipus Marshal (2006), the final project for his residency at the Aspen Art Museum with which he will participate this year in the European biennial, Manifesta 7 (Italy).

Letter on the Blind For the Use of Those Who See, his most recent work, which takes its title from philosopher Denis Diderot ́s book, is a tribute to his mother, who – he says – introduced him, in ways that theory could never have, into the “dark and wide world” he discovered through John Milton ́s poetry. The film – also exhibited in April and May of the current year at Peter Kilchmann Gallery in Zurich – evinces an obvious concern with showing other sensory approaches to reality. Brooklyn’s disused McCarren Park swimming pool is the desolate setting in which the artist elaborates his black-and-white version of the Indian parable of the blind men and the elephant.

Téllez juxtaposes the images of the six blind people and the image of the animal to narrate his story from the point of view of the physically disabled and thus produce a third image. The effect the latter produces on the spectator is the basis of cinematography, he asserts, “in the same way that it is the fundamental principle of poetry.” The protagonists ́ off-screen voices are the crucial element to generate this tactile and vivid experience in the viewer, while men and beast connect in a communion that transcends the visual. Since The Extraction of the Stone of Madness, Téllez has worked with models (the term with which Bresson designated actors with no previous experience) in order to render the evidence of the real more visible. This resource, which was a cinematographic tradition in Post-War Europe, opens the doors to a new dimension in which “the other” is not represented but rather plays a part in his/her own representation. “It is impossible to separate ethics from aesthetics when one thinks of representation, but it is our task as artists to call this representation into question.”

In Oedipus Marshal, this collaborative relationship with “the other” took a new course which was as unexpected as it was positive. When he presented the proposal for his play to the patients at the Oasis Club House, a mental health center in Grand Junction (Colorado), all of them were familiar with the westerns from which Téllez drew inspiration, and some of them even lent him their clothes for the film ́s wardrobe, but only one of them posed highly specialized questions about cinematography. Thus, the filmmaker found his co-scriptwriter, Aaron Shelley, who after having studied filmmaking at UCLA, was diagnosed with schizophrenia. “He was the catalyst to transform all the ideas into a script.”

The idea of the western had been on Téllez ́s mind since the days of his youth in Venezuela. “I grew up watching films on the American West”, he comments. The opportunity materialized after he was awarded a residency at the Aspen Art Museum in 2006. The film proposes a new version of Sophocles ́s tragedy, Oedipus the King, in which the patients wear masks used in Japanese No theater to represent the myth. “This narrative tool linked different sources in the play: Greek tragedy, the West as founding legend in the United States, and mental illness.” The catharsis, the artist explains, is offered at the end of the film, when the actors remove their masks and show their faces.

The stories may vary, but Téllez ́s discourse has remained homogeneous and preserved the same tone throughout time. The result has been that important museums such as London ́s Tate Gallery –which recently acquired The Passion of Joan of Arc (2001) – have acquired his works, and that prestigious galleries such as Figge von Rosen from Cologne or Arratiabeer from Berlin show his work. What a western such as Oedipus Marshal, the world-record- breaking human cannonball, launching himself across the Mexico–USA border in One Flew Over the Void (2005), and the many Joans of Arc at Rozelle Hospital in Sydney – where The Passion of Joan of Arc was filmed – have in common is their unequivocal commitment to that which society encapsulates and marginalizes. Under the artist ́s gaze, ethics regarding what is different is a responsibility, since a high prize is paid for being different in our societies, “especially when certain individuals, due to their condition, cannot become part of the production and consumption mechanism typical of capitalism.”
Javier Téllez is not concerned about living in the gray territory between the normal and the pathological. This duality enables him to see beyond ordinary, everyday actions to build a discourse that speaks of heterogeneity and inclusion, of the universal and not of the local, which is the essence of his subversive imagination always open to the possibility of a third way for the social, the political and the personal to coincide.

There is a long way to go after Manifesta 7. For the time being, his time is divided between a project with the Berlin House of World Culture, an exhibition in Germany, a collaborative project with patients from José Tiburcio Borda Municipal Hospital in Buenos Aires (Argentina) and a project with the Caracas Urban Think Tank, a non-profit organization headed by architects Alfredo Brillembourg and Hubert Klumpner.

“I am not interested in providing a cure for the patients; that is not the intention of the work,” he confesses. “What is important is to question the boundary between normality and pathology; but it is clear,” he admits, “that if there is something to cure, that something is, undoubtedly, society”.

Javier Téllez was born in Valencia, Venezuela, in 1969. A graduate of the Arturo Michelena School of Fine Arts (Venezuela), he settled in New York after having lived in Spain and obtained success in Venezuela through exhibitions at such venues as Sotavento Gallery–where he had his first show– the Museum of Fine Arts in Caracas and Sala Mendoza.
He has had solo shows and has participated in group exhibitions in Mexico, Cologne, Zurich, New York, Houston, Dublin and Madrid, among other locations in the international art scene. He has participated in the Venice, Sydney, Prague, Sao Paulo, Kwangju, Trento and Whitney Museum (New York) biennials. He was selected to participate in distinguished residency programs at the Aspen Art Museum in 2006-2007, and at the Baltic Art Centre in Sweden, in 2007. Among his solo shows, special mention may be made of Letter on the Blind For the Use of Those Who See, Peter Kilchmann Gallery, Zurich, 2008; Javier Téllez. Oedipus Marshal, Aspen Art Museum and Figge von Rosen Gallery, Cologne, The Battle of Mexico, Arratiabeer Gallery, Berlin, 2007; The Passion of Joan of Arc (Rozelle Hospital), Peter Kilchmann Gallery, Zurich and The Power Plant Contemporary Art Gallery, Toronto, S-t-e-r- e-o-v-i-e-w, Bronx Museum of the Arts, Bronx, New York, 2005-2006; A Hunger Artist, Carrillo Gil Museum, Mexico, 2004; Alpha 60 (The Mind-Body Problem), White Box, New York, A Hunger Artist, Sala Mendoza, Caracas, 2002; Bedlam, Rufino Tamayo Museum, Mexico, 2001; Bounced, Serge Ziegler Galerie, Zurich, 2000; I am Happy Because Everyone Loves Me, Gasworks Gallery, London, 1999; The Ship of Fools, Sala Mendoza, Caracas, 1997; Penalty, Silverstein Gallery, New York; The Cure of Folla, Museum of Fine Arts, Caracas and Arturo Michelena Museum, Valencia, Jonac 2001 mg, Silverstein Gallery, New York, 1996. Javier Téllez is represented byPeter Kilchmann Gallery, Zurich, Switzerland.