In 2005, Brígida Baltar had to leave her house in the Rio de Janeiro district of Botafogo During the fifteen years that preceded this event, the artist had lived and worked almost in a symbiosis with the old brick building, to the point of carving out her silhouette from the walls for the work Abrigo /Shelter (1996), or gathering rainwater from leaks in the roof later to use it in other works. 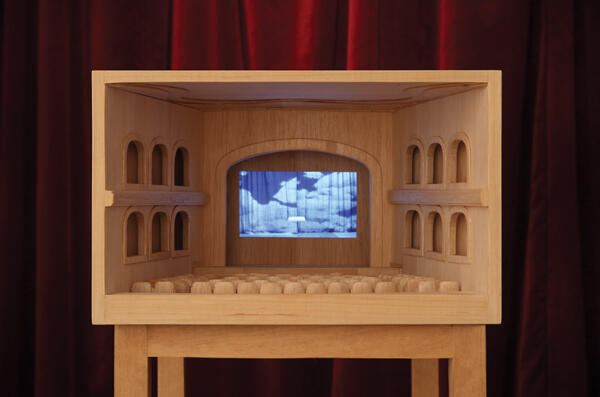 Also, the video presented at the 25th Sao Paulo Biennial (2002), which formed part of the group of works comprising the series Casa de Abelha (House of the Bee), also composed of drawings and objects, was shot there. In this video the artist appears wearing clothes freely inspired by the geometry of bee hives, while little by little, the house becomes flooded in honey: in the words of art critic Luisa Duarte: “inspired by the universe of these insects that build their home (the hive) and their food (honey) in an absolutely simultaneous way, Brígida creates a sort of fable translated into photographs, videos, drawings, animations and small texts aimed at showing the house as a center generating feelings of affection.” While the case of a creation so intrinsically linked to the place from which it emerges is not the only one within the sphere of contemporary production, it might be said that Brígida Baltar’s work, at least in what it expresses with regard to this relationship with the house, becomes even more connotative from the moment when, as mentioned at the beginning of this text, she is forced to move. Before leaving, as the culmination of a process she had been carrying out for some time, the artist took with her several bricks from the original building, grinding them until they were reduced to dust. In the years that followed, this red dust would be used to draw, in most cases directly on the walls, landscapes of Rio de Janeiro or shared scenes from everyday life, mostly without too much concern for reproducing in a literal and recognizable way, familiar places or faces, since it is evident that what the artist continues to portray to date is the landscape that remains in her memory and the faces of the friends and relatives that visited her home. In other cases, with the brick dust, the artist produced new bricks or molded small “objects” to fill holes and cracks in the walls and floors of the places where she showed her work, thus completing the repertory of material and immaterial functions of a house, even of a transportable one: that is, to provide elementary shelter and to be a repository of memory.

From this brief introduction, whoever is not familiar with the work of Brígida Baltar might infer that it is limited to this already large and significant number of works developed on the basis of the relationship with the house/studio. But in fact, even though it has its deepest and most intimate roots in the essence of that relationship, and more specifically in what may be considered universal in it, namely, the bond between the human being and the dwelling that shelters, protects and defines him/her, Brígida Baltar’s work expands way beyond that. Such is the case, for instance, of the numerous Coletas (Collections) carried out over the course of a decade (1994-2004), actions in which the artist, equipped with vials, stills and other “instruments”, and wearing clothes she herself designed and tailored, went out into the fields to gather mist, dew or the sea breeze. As I commented above, the purpose of one of these actions was to gather water that leaked through the roof in the artist’s house, but it is evident that by having to leave the house, the action becomes consolidated and gains poetic quality, becoming once again more universal and public, as opposed to private and intimate. It is when they are confronted with the power of open and empty spaces, with the silence and the intangibility of mist, or with the deafening noise and the inescapable presence of the sea that the works attain a genuinely sublime dimension. At the same time, the sophistication of the clothes (from the variations on the motif of the hive in Casa de abelha to the dress made of bubble wrap in Coleta de orvalho) worn for actions that are apparently so intimate and spontaneous adds another layer of mystery, creates an insoluble enigma, transforming the artist into a strange, fascinating presence. Identified with her mysterious task, she becomes an almost hypnotic presence which the spectators who view the videos and photographs recording the actions find it impossible not to accompany, in the same way that we are sometimes fascinated and almost mesmerized by children absorbed in their tasks.

Retrospectively, this care with regard to the clothing may be considered a preview of the series of works developed after the exhibition O que é preciso para voar (What is required to fly), held in 2011 at the Oi Futuro space in Rio de Janeiro. Here the artist introduced a set of apparently new themes related to the notions of flight and the theater, with the strong metaphorical content that both of these universes imply. By means of installations, small sculptures, videos and objects, Brígida Baltar suggests affinities between, for example, stage fright and the vertigo produced by a swing, and the confidence shown by the child that throws him/herself into the infinite space on it. While previously the artist had appeared in most of the actions, in this new series of works the sculptural presence of the pieces seems to free her from the need to show herself in the physical act of executing the work. In this respect, the empty swing that appears in one of the videos may be considered symbolic of this change in the artist’s stance: the place previously occupied by her, in first person or (more rarely) through some actor she had given instructions to, has now been left empty, in order to bear witness to the fact that what really matters is not the child that swings, or the swing itself, but what each person projects on this image. Therefore, the counterpoint to this work may perhaps be sought in the video that documents an action carried out in 2000, entitled Em uma árvore, em uma tarde (On a tree one afternoon), in which the artist appeared at the top of a tree reading a book, completely unaware of the movement of people, cars, trucks or buses on the street below her. For a long time, Brígida Baltar chose to remain focused on her universe and her thoughts, whether in her own house, on the beach, or on a tree top, but now, finally, she has taken courage, she has decided to fly, and she has done so.

Brígida Baltar was born in 1959 in Rio de Janeiro, Brazil, where she still lives and works. Her career began in the 1990s, often working with primordial elements, such as the material she took from her own house in the neighborhood of Botafogo. In recent years, Baltar’s work was shown in institutions throughout Brazil and in the United States, Japan and Argentina, among other countries. She also took part in important group shows, such as The Peripatetic School – Itinerant Drawing From Latin America (2011), which premiered at the Drawing Room in London, and then toured to several other venues. She participated in important Biennials, such as the I Biennial of the Americas, Denver (USA) (2010); 25a Bienal Internacional de São Paulo (2002); V Bienal de la Habana (1994). Her work is featured in important public collections such as MOCA Cleveland (USA); Coleccíon Copel, CIAC (México); MAC-USP, Museu de Arte Contemporânea USP (São Paulo, Brazil); Itaú Cultural (São Paulo, Brazil); Fundação Joaquim Nabuco (Recife, Brazil); Coleção Gilberto Chateaubriand, Museu de Arte Moderna do Rio de Janeiro (Brazil).