Over the course of the 1960s, the human body progressively became established as a privileged field for the actions of Brazilian artists. While the Neoconcrete Manifesto (written and published in 1959 in Rio de Janeiro) already advocated going beyond the formalism of the Concrete movement, fostering the spectator’s direct participation, it was actually the seminal experiences of artists such as Hélio Oiticica, with his Parangolés and his Penetrables, and Lygia Clark, with her Bichos (Creatures), and later with her installations, such as the famous The house is the body: Labyrinth, which consolidated over the course of a decade, the sensory dimension as the cornerstone of artistic experience. The cases of Oiticica and Clark are probably the best known, and in a way, they constitute the tip of the iceberg, but the truth is that those years marked the establishment of what may currently be considered one of the most solid lineages within Brazilian artistic production of the past few decades, whose cornerstone was, precisely, an emphasis on the interaction with the spectator that involves a physical and not merely an aesthetic participation. 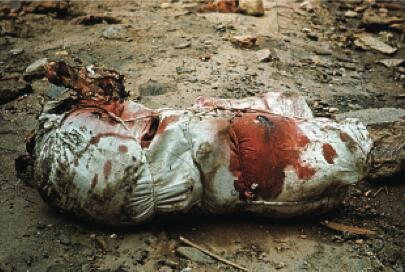 However, even taking these premises into account, it is possible to state that the first actions carried out by Artur Barrio (1945, Porto, Portugal) as of 1969, and which must be considered fundamental for the consolidation of the aforementioned trend, entailed a profound rupture, which was to a certain extent unpredictable. For his participation in the Salão da Bússola, organized in 1969 by the Museum of Modern Art in Rio de Janeiro, Barrio employed different programmatically “non-artistic” materials, such as foam, paper bags, newspapers, waste materials, transforming the exhibition into a sort of performance in the course of which, and with the participation of the public, the work underwent a constant transformation. To close the exhibition, the artist incorporated pieces of meat, creating the famous “Bloody bundles”, which he took outside the museum premises to be used “as the cement pedestal reserved for a sculpture dedicated to and acquired by the M.A.M. in Rio”. The work was considered suspicious by the police and withdrawn, constituting the first example of an intervention with a strong public impact (in a context - it is worth highlighting – aggravated by the heavy political atmosphere, something which would become a recurring trait in Barrio’s career. The same year, 1969, Barrio wrote his Manifesto (against art categories, against salons, against awards, against juries, against art criticism), in which he explained the theoretical grounds for his violently critical stance and the choice of materials employed in his works/actions. The clarity of his ideas, remarkable for an artist who was only twenty-four years old, and the consistency regarding these premises that Barrio would exhibit along the more than four decades that followed, justify a rather extensive reference to his manifesto:

Due to a series of situations in the sector of the visual arts, regarding an increasingly frequent use of materials considered expensive in terms of our, my reality, as a socio-economic aspect of the Third World (Latin America included); due to the fact that industrialized products are out of our, my reach, and only available to an elite which I oppose, because creation can not be conditioned, it must be free (...) /I utilize perishable, inexpensive materials in my work. (...) It is clear that the simple participation of works performed with precarious materials in the closed-circle art scene arouses the opposition of that system in accordance with its current aesthetic reality. /Due to the fact that my work is conditioned by a type of transitory situation, its documentation will automatically rely on photography, film., recording, etc. − or simply on retinal or sensory recording...

Perhaps it would be worthwhile, with the aim of exemplifying the destabilizing impact of the artist’s interventions, to enumerate the materials employed in the action titled Unleashing confusion on the streets (carried out in 1970), according to Barrio’s own list: “Blood, nail fragments, saliva (gob), urine (mine), faeces, snot, bones, toilet paper used and new, sanitary napkins, used cotton wool pieces, moist paper, sawdust, food remains, ink, film fragments (negatives), etc.” The visceral temporary nature of the materials, which constitute, in a way, a disturbing memento mori, is evidently consistent with the professed and central objective in Barrio’s poetics: To create, instead of an art work or an art object, a “siuation”.Andinfact,theseriesofworkstermedSituações (Situations), in which the artist physically manipulates the space, modifying it and rendering it in a way, active and vibrant, constitutes the conceptual core of his entire production. Through the so-called Registros-fotos (Documentation-photos), Registros-filmes (Documentation-films) or Registros-livros (Documentation-books), one may have only a tenuous impression of what the Situations were, but Barrios himself cautions about the impossibility to faithfully reproduce, register or convey an ephemeral and personal experience. Even smaller scale works, such as the famous Livro de Carne (Book of Meat) (1979), highlight, to a certain extent, the paradox of an extremely conceptual work which, however, can only be genuinely captured through the senses.

In a more general way, books constitute a fundamental reference in Barrio’s work, as demonstrated by the fact that the source of all, or at least of the great majority of his installations and actions, and the place where the ideas derived thereof converge, is what the artist calls the CadernosLivros (Notebook- Books). It might even be asserted that it is precisely one of those Notebook-Books that best summarizes the artist’s
reluctance to transform documentations. In 1970, Barrios executed one of his best-known actions, which consisted in a solitary and delirious ramble, without a predetermined course or objective (as corresponds to a ramble) through several neighborhoods in Rio de Janeiro. In the narrative produced after the action, the artist announced the wish to write a four- hundred page Notebook- Book on the experience, but what he finally produces was a notebook with its pages completeky blank, which is, in a way, an attempt to illustrate the difference between the Dionysian and explosive content of the action and the fatal inadequacy of any representation. More recent works, such as the installations performed over the course of the past decade, and even more evidently those produced as of the artist’s well- known participation in the 2002 Kassel Documenta, show an evolution in the work of Barrio, who has adopted a less violent tone with an emphasis on the poetics of his proposals. Through the recurring use of perishable materials, such as salt, meat, bread loaves, or coffee grinds, it is the institution itself that relatively often becomes the target of the artist’s critique. Whereas on the one hand a significant change becomes evident, since the materials employed − unlike the case of the bodily fluids utilized in his early actions − presuppose the inclusion of human work, these installations continue to demand the spectator’s physical participation in order to be understood, thus reaffirming the inadequacy of all and any documentation to arouse a genuine enjoyment of the artistic gesture.

Artur Barrio was born in Porto, Portugal, in 1945 and he relocated to Brazil in 1955. Since then, he has resided in Rio de Janeiro, where he pursued studies at the National School of Fine Arts. In Brazil, he participated in countless solo and group shows in galleries, museums, and cultural centers, besides participating in the Sao Paulo Biennial in 1981, 1983, 1985, 1996, 1998, 2004 and 2010. Outside Brazil, his work has been included in numerous group shows in several of the most important museums around the world, and he has presented solo shows in the Museum of Contemporary Art in Serralves, Porto, Brazil, (2000); Palais de Tokyo, Paris, France (2005); Rufino Tamayo Museum, Mexico City (2008), among others. He also participated in the Havana Biennial (1984), Mercosur Biennial (1997 and 2003), and in the 11th Kassel Documenta (2002). In 2011, he will represent Brazil in the 54th Venice Biennial.