A TRIP TO THE LIBRARY

In the framework of Buenos Aires Art Week, a group of collectors donated this morning to the Mariano Moreno National Library (Buenos Aires, Argentina) Leandro Katz 'Lunar Alphabet’. Conceived in September of last year as a site-specific piece for the emblematic brutalist building designed by Clorindo Testa, the moons of Leandro Katz are now part of the south American city.

For the ancients the night possessed timelessness attribute - or curse -. Without the sun there was no way to measure the passage of hours. Something similar happens in the study of Leandro Katz. 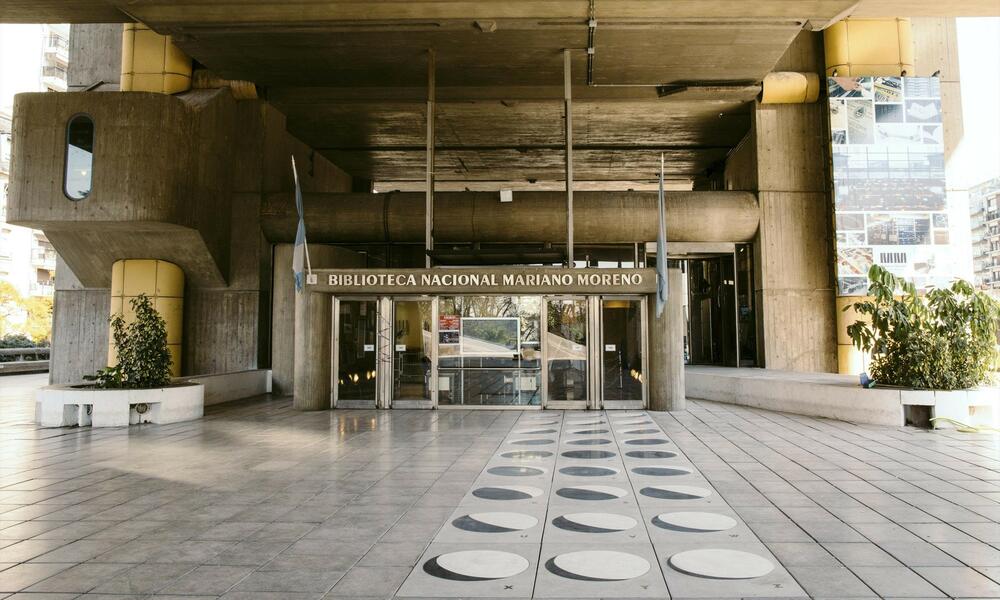 Since the second industrial revolution - to establish an approximate date – traffic jam is a clear indicator of time (at least at dawn and in the afternoon). Leandro Katz lives on the second floor of a building over Santa Fe Avenue, one of the central arteries of Buenos Aires transport. However, inside his house, which at the same time is a study, the hum of the buses is not heard; everything is governed by his moons, transforming space into an infinite night. Even the spirit of Katz, restless and curious as a teenager one, responds to this order.

There is another metaphor within this comparison: it is the fact that the timeless condition that for the ancients had the night is reproduced in the house of someone who, with the rigor of the scientist and the imagination of the poet, not only made an alphabet with the moon phases, but also studied to exhaustion the pre-Columbian communities - the Maya, mainly -, their buildings and their language. From that obsession, says Leandro, projects such as Lunar Alphabet, Paradox or Catherwood Project emerged.

Leandro Katz's career is an upward curve. Now, if we could trace on a map with a red pencil the movements that the artist made since his departure from Buenos Aires in 1961, the result would be something similar to a painting by Willem de Kooning. From the Argentine capital to New York, Katz toured America for five years. On the way there was no group of poets he translated into English or he had visited during their stays. Immersed entirely in poetry, Leandro launched himself into the world as The Fool of the Tarot: innocent. No dog unlike the esoteric figure, but with a notebook and a pencil.

Contemplating this first stage of the artist, the donation made by Alec Oxenford and Amalia Amoedo, among other collectors, to the Mariano Moreno National Library (BNMM) is very successful. "It's something like the metaphor of the Arabian Nights carpet. One climbs into the carpet and is transported to the world of books. Arrives in an instant where he wanted to go. I think Jorge Luis Borges would have loved it ... ", explains Leandro. "As a poet, the whole idea of ​​the flying carpet moves me."

The artwork donated to the BNMM is a recreation of the Lunar Alphabet (1978) commissioned to Leandro Katz by the curator Cecilia Alemani within the framework of Art Basel Cities: Buenos Aires 2018. Located in the esplanade of the library, the three columns of Lunar glyphs placed on the ground are a metaphor for language. "I've always had a fascination with hieroglyphics," describes the Argentine artist. "Not so much from an archaeological point of view, but philosophical in relation to poetry. And the result is a highly conceptual work that everyone likes; on the one hand, it is ludic; on the other, it has a very dense linguistic load ". And so it is: for the passer-by, the tiles can be a galactic hopscotch, a code language, a Borgian enigma, a simple alphabet ... In that polysemy lies the value of the oeuvre:

WHEN WE PULV ERIZE WORDS,
WHAT IS LEFT IS NEITHER MERE NOISE NOR ARBITRARY,
PURE ELEMENTS, BUT STILL OTHER WORDS,
REFLECTION OF AN INVISIBLE AND YET INDELIBLE REP
RESENTATION: THIS IS THE
MYTH IN WHICH WE NOW TRANSCRIBE THE
MOST OBSCURE AND REAL POWERS OF LANGUAGE. (Lunar Sentence II)

Each room in Katz's apartment is linked to the others by a common element: a table full of negatives. Leandro explains that he is in the making of a book that brings together all the photographs he took of Charles Ludlam and the Theatre of the Ridiculous in the late 60s and early 70s. It was exactly after those years that the poet began to put his eyes on the sky.

Sitting in the kitchen - where a pile of negatives also rest - in profile to a huge skylight that overlooks a winter garden, Leandro reconstructs the entire process that led him to the composition of the alphabet: "I wanted to illustrate, somehow, the connection of language with nature and the contemplation that ancient peoples made of heavens. I had to find the moon at a certain time of the night and in specific periods because everything could change from an 'L' to an 'M'. It took me months to build it, it became almost a loving relationship, a prayer. " Every night, Katz called the Farmers Calendar in New York to find out what the weather conditions were going to be and on the terrace of his studio in Manhattan he portrayed the moon with a 35-millimeter camera. He had practically a studio on the roof, he says, because also in those long vigils were born some of his famous films.

"At that time, the time lapse footages of the moon crossing the sky were, for me, my first political works," he says with laughter in his mouth and continues: "I had an audience watching the moon go through the screen for twenty minutes! It was, of course, something very beautiful and sensual but also tedious. I thought: 'I have them all looking at the Moon' and it seemed extremely sarcastic. " These films in avant-garde New York theaters and the construction of the alphabet were, in some way, the triggers of his career as a visual artist. Although Leandro never stopped writing, it is at the end of the 70s that he begins to focus on visual poetry, the interpretation of spaces and the universe of symbols. This is also due to the importance of the work that, from today, will always inhabit the esplanade of the National Library: just as the night separates one day from another, the Lunar Alphabet separates the literary poet from the visual poet ... and finally unites them.

Before leaving his home, Leandro reveals the secret: the glass is reinforced, that's why the street is not heard. In short, this gesture characterizes art and literature, the manipulation of an object or the concealment of another for the construction of a possible world.