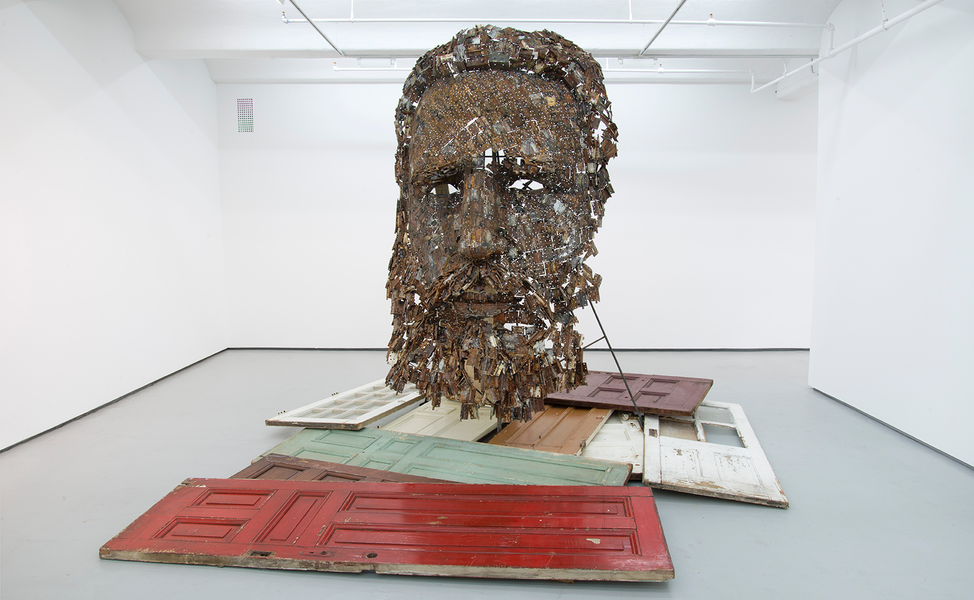 Yoan Capote’s Collective Unconscious inhabits binary spaces. Two galleries of work explore two seemingly contradictory themes—physical and mental suppression, and human resilience. Capote chooses to explore these themes by using historically laden signifiers such as photographs of groups of protestors and handcuffs, as well as by using everyday easily recognizable materials such as plastic laminate cutting boards and door hinges to create his sculptural installations. These familiar materials allude to the presence of a shared memory and suggest that there exists a collective understanding, however Capote (Cuba, 1977) offers no resolute narrative from which to actualize any specific truth. Instead, by situating objects in both congruous as well as oppositional relationships Capote invites these objects to be reconsidered and historically re-read. As a result, the boundaries between suppression and resilience become blurred within this unspecific state of being.

As one of Cuba’s most renowned artists, it is apt that Capote proffers this rewriting of history-in-the-present in tandem with the 12th Havana Biennale.

The installation Immanence, 2015 comprises a pile of old doors, which form the base upon which an over-sized portrait of Fidel Castro made entirely of door hinges has been built. Relocating the routine use of these everyday materials renders their inherent meaning malleable, and contrasts the static monumentality of Castro’s depiction. This begs the question will these materials outmaneuver, and outlive, this persona? Adjacent Old Speech, 2010-2011, comprises equally static chained cement speakers and a microphone that negates impulses of free speech, recalling Tania Bruguera’s controversial project Tatlin's Whisper #6 currently in debate in Cuba. Yet despite its dormancy Old Speech begs to be used anew.

The second space offers a double-sided loudspeaker—with a tonsil in the center—shouting in two simultaneous directions; a row of handcuffs are melded by cast connective tissue in a long arching spine, perhaps a metaphorical backbone of imprisonment; a dark landscape triptych with cutouts of people in various sexual positions collaged in global monetary currencies illustrate a dependency of exchange or perhaps mutual economic violation; and a gridded grate with two indented sets of fingerprints cast into the metal poetically give the bars an impossible bend. The characters evoked by Yoan Capote’s objects neither prevail nor are tethered to specific narratives of past atrocity or oppression. Instead, they provide the impetus from which to inspire creative history.