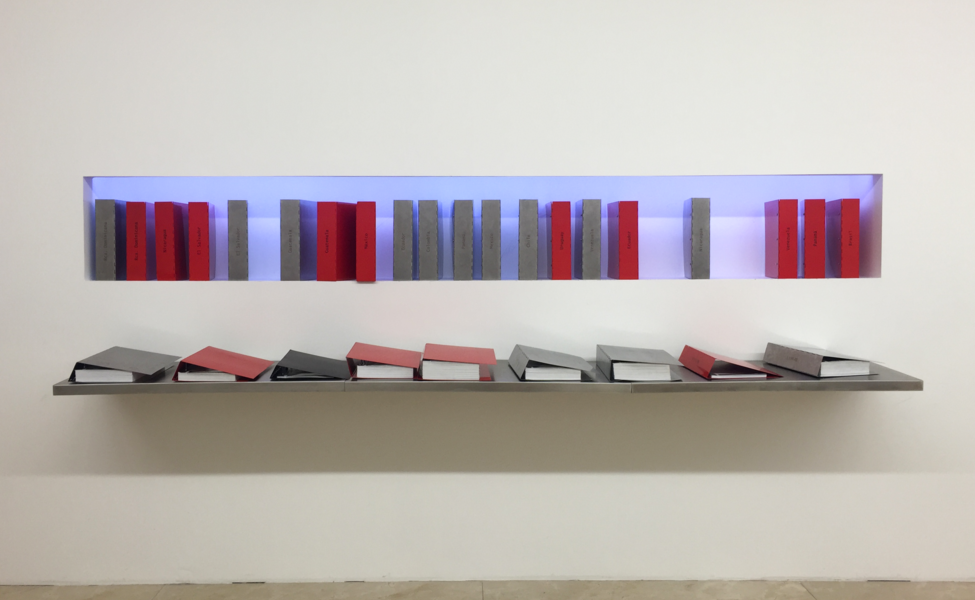 The project by artist Voluspa Jarpa (Rancagua, Chile, 1971) on exhibit at the Museo de Arte Latinoamericano de Buenos Aires (MALBA) is based on declassified CIA documents about fourteen Latin American countries. Jarpa displays the documents in different ways: some are hanging like long scrolls, others are printed on transparent sheets, others are held in box files, and still others are combined with volumes reminiscent of Donald Judd’s Minimalist forms. The documents contain information about the involvement of the United States secret service in the region’s politics; one of the recurring features is black cross outs that make some of the information inaccessible. Jarpa’s research contains as well portraits of forty-seven assassinated Latin American leaders, a video of her authorship, and a gallery with audio work.

It is not self-evident that the purpose of showing an archive in an art museum as political operation consists of what is called “democratization” of access. First, because—as Jacques Derrida points out—the topology of the archive is paradoxical: it is an act of removing in order to better store. Second, because the political efficacy of art is also paradoxical; it eludes the predictable causalities of linear logic. Regardless of intentions, to make visible in the exhibition space can also lead to its inverse, that is, produce a place where things can more easily escape vision. Faced with a theater of the archive displayed all at once, staged in a museum, viewers might succumb to the illusion of being before a whole with no remain and relegate the act of memory to something already written and now presented with the evidence of a document.

Jarpa’s exhibition avoids the first risk by the cross outs that evidence the fragmentary nature of what is displayed. She manages to skirt the second by intersecting the documents and other forms and materialities that demonstrate that the eloquence and political power of archives is only set off when they are related to something other than themselves.