In the work of Vic Muniz, the materials have an economy, a social and political history, or a technology that begs to be included in the discourse. 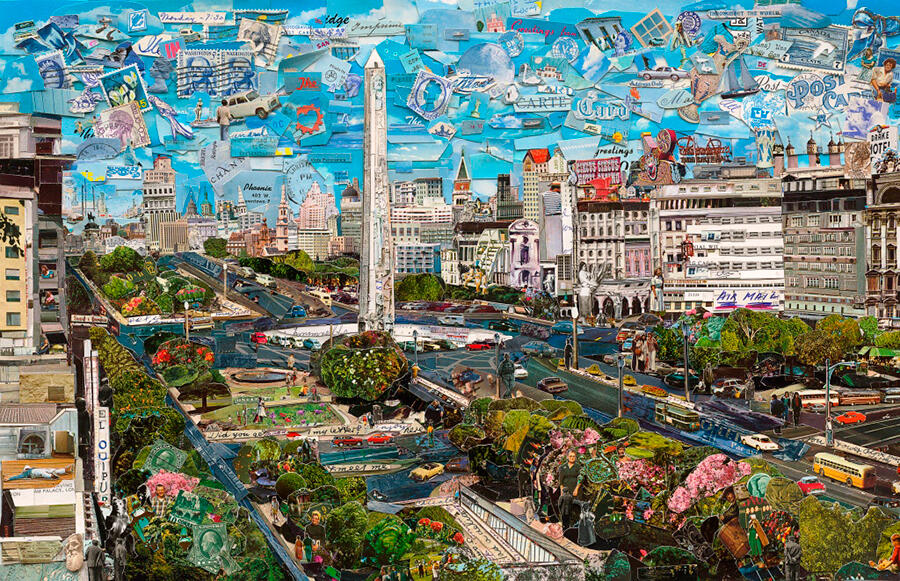 When do we have an image? What conditions make it possible for it to appear? Vik Muniz’s (Brazil, 1961) exhibition at the MUNTREF (Museum of the University of Tres de Febrero) may be conceived as a sum of attempts to formulate these questions, once and again, from the perspective of the problems and the potentialities of the materials with which he is faced. The effect produced by the ensemble fluctuates between the demonstration of a constructive method backed with tenacity, and surprise in the presence of the phenomena of memory and perception.

In the exhibition rooms on the third floor of the former Hotel de Inmigrantes (Immigrants’ Hotel), the works of the Brazilian artist Vik Muniz proliferate, diverse and singular. Free from any common traits due to their exceptionality, they do not coincide in any formal characteristic beyond a certain visual texture that we might define as corpuscular or pointillist. As a common denominator, they retain the use of the photographic technique with the aim of documenting an ephemeral production. This is the first point of convergence for the gaze. This signature style – which in a very plausible way is the subject of a retrospective exhibition – relies more on the thematization of this way of working than on formal recurrences. Muniz’s is an art of procedure. An art that the viewer perceives in two tempos: in the ambivalence of a movement that fluctuates between the recognition of the materials and the recognition of the figures that these materials include.

A field of insistences runs through this method. In the first place, materiality is always a signifying principle. In the work of Vic Muniz, the materials have an economy, a social and political history, or a technology that begs to be included in the discourse. In this universe of materials, primal yet saturated with meaning, the form that provides meaning – the socially recognizable image floats like a promise or a perishable illusion, strengthens itself to come to the surface and rapidly falls apart. Perception always occupies the thematic focus, as a network of cultural codes – which the gallery texts highlight – but also as a result of the factors that, according to the Gestalt theory, structure our perception – possibly a less attractive field for his constructive poetics and, consequently, a less invoked one. Behind these operations, like a basso continuo, the cultural archive of images – the already seen, the common references – appear as a place with which one may traffic in multiple ways. The Jardín de las delicias (The Garden of Delights), or the triad of stereotypes that the Double Mona Lisa, Pollock and the Che Guevara compose on a wall, are some of the regions of this visual encyclopedia. In general, they appear as a silent backdrop against which Muniz’s procedures retain their centrality and powers of dislocation.

We move from materials that favor the imagining of forms, such as cotton, towards others conventionally linked to fixed meanings – an inventory that ranges from caviar to junk. In each case, the choices are carefully explained in texts available to the viewer, a communicational device that lends a didactic tone to the show. In terms of timelines, perhaps the most resounding aspect is the printing work, of erasure and overwriting in the photogravures of Life magazine. But the leaps into the past engaged by each reference to the history of the images pose their own singular quandaries about time.

The work Buenos Aires, object-symbol of the exhibition –separated in the museographic staging and multiplied in digital and graphic supports – goes on to swell the ranks of the series Postales de ningún lugar (Postcards from Nowhere), addressing with its fragmentation and integration procedures the iconography of tourism in Argentina. A locally anchored question on the image repertoire through which we perceive and think.