The show of work by Tomás Maglione on exhibit at Galería Ruth Benzacar, attests to how sound—and how open to intuition and surprise—Maglione’s project is. 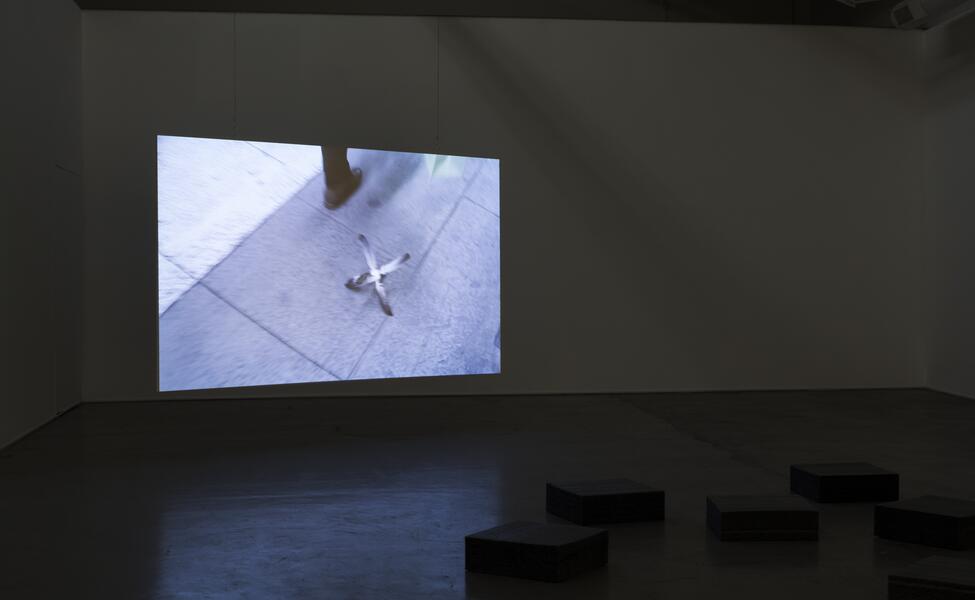 Aliento, the show of work by Tomás Maglione (Buenos Aires, 1985) on exhibit at Galería Ruth Benzacar, attests to how sound—and how open to intuition and surprise—Maglione’s project is. That project took off in 2011, when he was awarded first prize at the Curriculum Cero competition organized by Galería Ruth Benzacar. On this occasion, Maglione shows three HD digital videos and five large-format works on paper. In Cuando el mundo se disuelva [When the World Dissolves] (2016, 24’), the camera follows a device made of six feathers as it makes its way down the city’s streets pushed by occasional and improvised breezes. While the video makes reference to the title in Spanish of a short story by J. G. Ballard [The Overloaded Man, 1961] what it comes upon is the unexpected; the only thing that dissolves here is certainty. The work is reminiscent of Francis Alÿs’s walk around Mexico City, even though what’s registered here is not objects, but images that are no longer. As artist and space engineer Adrián Unger writes in the exhibition text, the work acts as a guide to reveal “knowledge of what is not known to be unknown.” Though a work in its own right, Blinks (2016, 6’30”) shows the gazes and blinks of those watching the feathers rolling down stretches of sidewalk, smooth or uneven, whole or cracked, clean or dirty. What are they looking at? Did they perhaps see something they had discarded, calling forth a forgotten image or emotion?

The way the third video, Aliento [Breath] (2016, 19’), is installed is related to its content. The 32-inch LCD screen placed in the middle of the gallery on a 3mm-tube structure shows what appears to be a crack but is actually a shadow filmed under a freeway somewhere in the city. The works on paper (mixed media, up to 200x200 cm.) are like pages from a large notebook on which improbable texts with indications and traces of journeys around the city are written. Lovecrafteando [Lovecrafting] (fabriano paper, 192 x 108 cm.), with its reference to science fiction writer H. P. Lovecraft, allows for conjecture about the supposed results of scientific experiments performed by the feathers. As a sequel, a few days before the close of the show, Maglione, Unger, and contemporary musician Jorge Espinal took some twenty people on a walk, a perceptive and sensorial adventure in the blocks surrounding the gallery in the Villa Crespo section of Buenos Aires.