THE FORM IS FEMALE

THE FORM IS FEMALE
By Claire Breukel 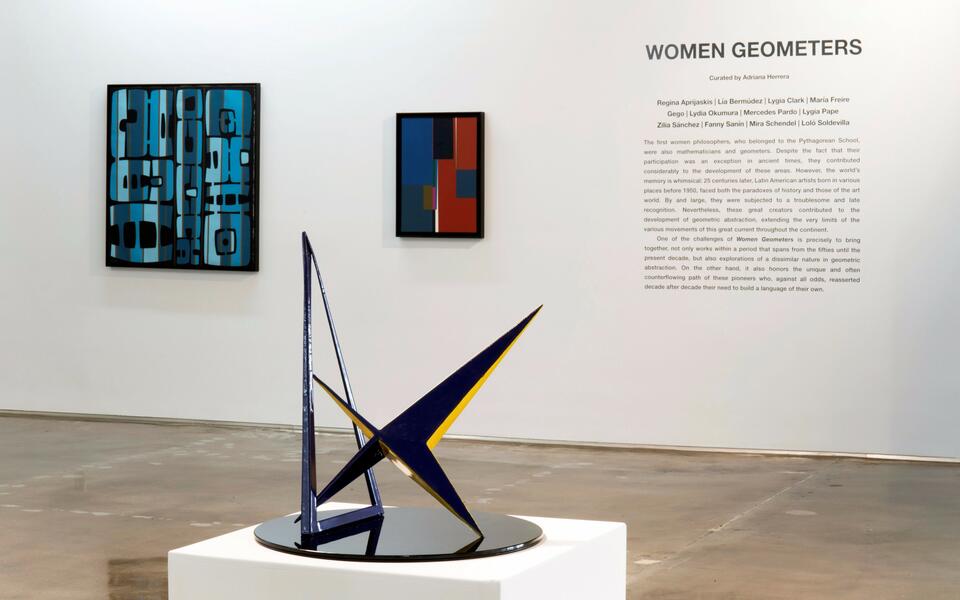 Women Geometers brought together a dozen artists spanning Cuba, Venezuela, Brazil, Peru and Colombia at the Piero Atchugarry Gallery in Miami from June 29 – September 14, 2019. Curated by Adriana Herrera, the exhibition title suggests that the defining factor of the artwork is its production by women within the genre of Geometric Abstraction. Yet the act of collating this genre of artwork is only one aspect of a more complex exhibition. Women Geometers invites a vital reevaluation of the work’s cultural significance within male-dominated art history; offers invaluable insight in to each artist’s practice and explorations; and affords an opportunity to take inspiration from artists denied timely art world access due to gender “difference”—a topic that is equally relevant today.

Herrera’s “parameters” for the exhibition are that the artwork has been created by Latin America-affiliated women artists born before 1950. These parameters, although inadequate within contemporary classifications of geography and gender, serve in this instance as necessary and nurturing hands to encapsulate a marginalized section of art history.  In fact, the exhibition is less about feminism and being “Latina” or LatinX than it is about an exploration of cultural identity within the practices of a dozen exceptional artists.

Three mono-color installations by Brazilian artist Lydia Okumura (Brazil, 1927-2004) align a single wall, and provide a performative optical entry to the exhibition. Creating the illusion of space, Okumura’s Untitled I, 1981 bursts primary blue squares and a large pentagon across the wall and floor as if splaying out from its corner. Eight thin black lines connect the shapes creating the illusion of a contorted three-dimensional box.  Untitled II, 1981 comprises two light purple rectangles, one suspended above the other being held up by black lines that are in fact a flat surface creating the illusion of volume.  A third yellow rectangle in Untitled, 1980 is the base of an illusory box, and takes on human-like expression bent from floor to the wall as if leaning back for a rest after a hard day. Together these works recall the playfulness of Lygia Clarks bichos sculptures that offer multiple possible Rubik’s cube-like formulations (congruently, Clark’s aluminum bichos titled Caranguejo, 1984 is also featured in the exhibition), while conversing with the use of lines to create optical illusions of immersive spaces achieved by Venezuelan op and kinetic artist Jesús Rafael Soto in his paintings, and spaces of actual immersion within his penetrable sculptural installations.

A contemporary of Soto, German-born Gertrud Goldschmidt (known as Gego) enjoyed a degree of acclaim for her work in her home country, Venezuela, specifically for her sculptures that gave the illusion of moving. S/T., 1966 is a series of steel wire twists and lines which recall an insect or perhaps a bird. Its dynamic jutting steel strands give it the illusion of speed, and suggest the potential of flapping wings.

Illusory tactics of motion can also be seen in the paintings and drawings of Colombian painter Fanny Sanin (1938-). Colorful squares and triangulations swim in and out from the surface recalling the depth and illusion of space situated somewhere between a Mark Rothko painting and the paintings of Op art forerunners Victor Vasarely and Bridget Riley. However, less focused on the need for optical trickery than Vasarely and Riley, Sanin’s geometry’s have an unadorned and elegant, yet equally unyielding, ability to alter the eye’s perception. Intense color lends a playful airiness to the rigidy of the strong angular lines and shapes in Acrylic No. 2, 1990 and Acrylic No. 2, 1999, which appear as moments of light falling upon architecural forms.

During the time period of the artworks production mathematics and geometry would have been typecast as a male-centric interest. Here, the exhibition parallels with Katherine Johnson’s enormous under-recognized contribution to NASA, popularized in the 2016 movie Hidden Figures. Without this movie, the results of Johnson’s mathematical contributions would have gone under-recognized and the importance of her work within the greater NASA context largely lost. Women Geometers operates with the same motivation, highlighting the contributions of these women through the meaning and intelligence of their work. No exception needs to be made to bolster these artists aside from a space and a platform for their work to be seen, evaluated and acknowledged. The work is not about women geometers as much as it is about Geometric Abstraction as explored by a cross section of Latin America-affiliated artists.

In fact, the only overt reference to femininity, and feminism, is in Zilia Sánchez Domínguez’s (Cuba, 1926), Seri Infinit. Protruding ovals appear as molded breasts hanging on the wall strangely reminiscent of hunting trophies. If not disturbing enough, further usurping their initial erotic appearance, there are not two but three mammary-like ovals, and one hangs upside down. This theatrical gesture, recalling Sánchez Domínguez’s history as a theatre set maker, overturns these forms physical allure, demanding them to be relooked as abstract forms of art. On closer inspection the nipples are in fact hard grooved points suggesting a deliberate, liberated and unapologetic approach to her practice.

Notwithstanding the initial framing of its title and curatorial parameters, Women Geometers succeeds in transcending gender and geography, and importantly time period. The artists and their work is not only central to art history being rewritten, these women artists, and their respective representatives, are still fighting to have their work included in the dialogue of Abstraction today. A similar battle persists for contemporary women artists. A National Museum of Women in the Arts 2019 article shared a survey that found of the18 prominent art museums in the United States with collections over 10,000 artists that 87% are male, and 85% are white.[1] Although there is talk of museum collections diversifying, have the challenges facing non-male identifying artists in Latin America, or of any non-white descriptor, changed at all? Herrera makes it clear that it is not due to lack of significant and astute creative production.