On July 28, a retrospective exhibition of the Canarian artist Concha Jerez (Las Palmas de Gran Canaria, 1941) was inaugurated at the Museo Nacional Centro de Arte Reina Sofía. Mounted in the Vault Room, the Protocol Room, the stone stairs and the third floor of the Sabatini Building, the project takes museum visitors on an extensive journey that goes from the 70s - the artist's formative years - to the present. Que nos roban la memoria (They steal our memory), curated by Joao Fernandes is, beyond its regressive nature, a reflection on the mechanisms of censorship and repression in the face of memory mechanisms. Ultimately, a historical review from collective memory and personal memory. 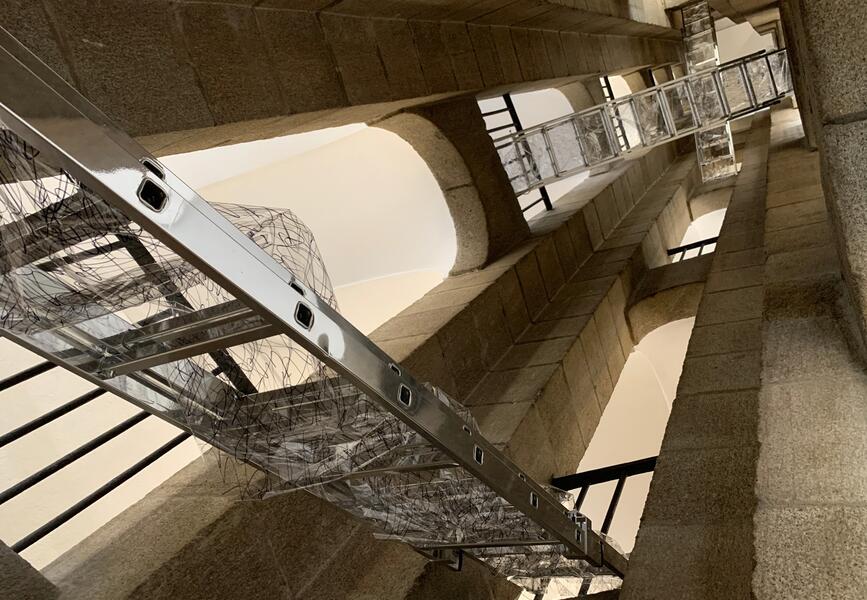 Awarded in 2017 with the Velázquez Prize, a recognition that values ​​the artists’ career within the international circuit and the development and political influence of the works, Concha Jerez reopens the Museo Reina Sofía after the pandemic with a megaproject of political review and freedom of expression over half a century. Que nos roban la memoria supports the notion of memory of the political and social events that, through silence and censorship, have manipulated history. For this, the Spanish artist has arranged the exhibited works into three axes - mostly from the 70s and 80s, but also with a large site-specific intervention on the museum's stairs.

In the first place, in the Sala de Bóvedas (the museum’s basement) and on the third floor of the building, Jerez exhibits a series of drawings and installations that correspond to the 70s and 80s. There, visitors can largely appreciate a period of training and exploration in which the artist began to find a specific language and a set of themes and interests that would later accompany her throughout her work: limits, surveillance, censorship, freedom, everyday life and, obviously, memory.

Secondly, in the Protocol Room, the exhibition seems to have the objective of showing us Jerez’ creation process. The project sketches (later made), some minimalist pieces made in the early 70's, a series of mail art and some intervened objects that coexist in the same space. The works that are exhibited in this room do not become works in their entirety, but they do allow us to understand from another perspective the material language that the Spanish artist has been building ever since the beginning. In addition, a virtual link to the Expanded Radio project, developed during the 90s and 2000s, with the collaboration of musician José Iges, is exhibited here.

Finally, the third axis of the exhibition is the intervention of the building's stone stairs. As the backbone of Que nos roban la memoria, the intervention has been specially planned for the exhibition. Here, Jerez uses the space of the Sabatini Building by questioning it directly. As if it were a living entity, the artist illustrates the different “memory timeframes” that the building has witnessed from its foundation as a charity hospital to its current status as a museum. In this way, the visitor ascends vertically in time passing through four memory dimensions established by Jerez: Forgotten Memory, Self-censored Memory, Written and Oralized Memory, and Silenced Memory. This is, without a doubt, the most interesting part of the exhibition because the artist introduces herself in current times, which forces her to transfer her language to contemporary issues: feminism, migratory crises and the marginalization of specific groups, among other things.

Que nos roban la memoria is the first large-scale individual exhibition since the health crisis, and will remain in the museum until January 11, 2021. It can be visited in the Reina Sofía Museum, while wearing a mask and respecting due distance.