We could feel that the whole exhibition becomes a poem, that as soon as it anchors us to a meaning and an experience, it immediately produces a new estrangement to make way for another meaning and another experience. 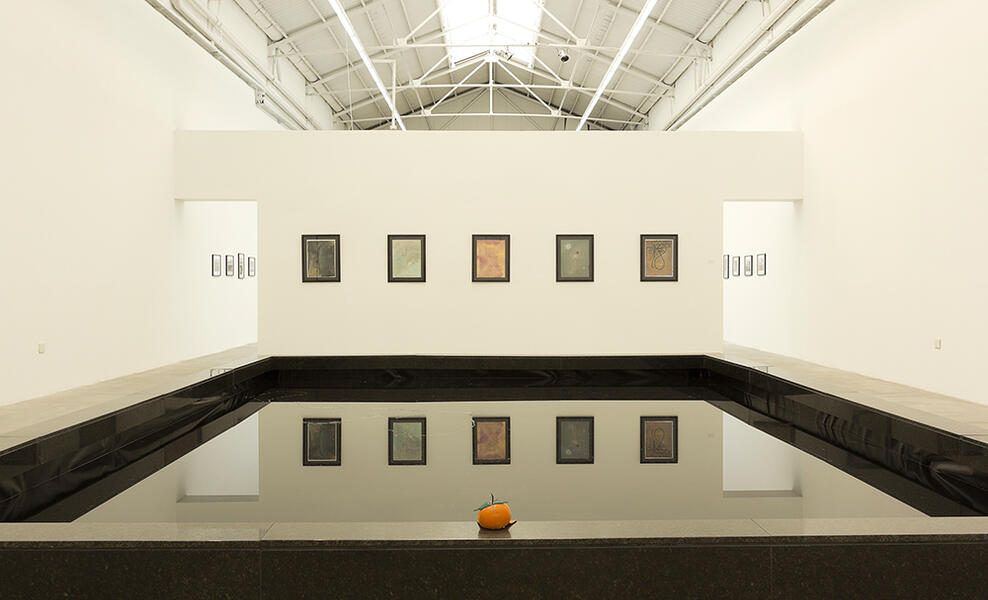 “The poem is a collage of the real”, reads a text by the American poet Jack Spicer –included in his book After Lorca– in the first space of the exhibition Las Fuerzas Productivas  (The Productive Forces), by the Argentine artist Martín Legón (Buenos Aires, 1978) at Barro Arte Contemporáneo Gallery. The words ‘poem’, ‘collage’ and ‘real’ become precious gears of a show that, like others presented by the artist, was characterized by its conceptual complexity and diversity of formats. The exhibition is structured in three spaces resulting from the division of the gallery’s ample continuous space, and that gradually produces a tension, in turn, in notions such as reproduction and originality, production and consumption, discarding and recovery, anonymity and signature, among others. The first space showcases thirty family photographs, most of them from the 1950s, taken by anonymous persons in the United States. Legón purchased, through the Internet, lots composed of family slides sold at auction until he gathered together 18,000 images. The exhibited photographs, reproduced and enlarged, are the result of a selection carried out by the artist. In the center of this room, a square composed of all the purchased slides is presented as an installation. The artist’s proposal for the 30th Sao Paulo Biennial had already included anonymous drawings of a real work selection process, which he also bought and recovered. In the second space, a great black pool whose waters appear dense and dark awaits the viewer. In one of the ends of this geometric form – which Legón associated in another show with Malevich’s suprematism while he now suggests other relationships – we discover a very small orange doll sitting on the edge. After smiling at its unexpected presence, we wonder whether it may, perhaps, be afraid of taking that leap into the depths of the pool, enigmatic and abyssal relative to its size. The ideas follow one another when we also find in this room five abstract paintings produced by the artist, which are duplicated through their reflection in the pool. The last room, in turn, functions as a synthesis of the previous ones, and in this respect, the exhibition’s title, which remits to Karl Marx’s theory, makes it possible to conceive the exhibition in dialectic terms. A showcase in the third room displays the thirty slides reproduced in the first room and besides, on a white marble sheet there is a pillow covered in part by an orange t­shirt, both of which the artist found one day at his door. And in this last case there appears the “casual collage,” as Legón calls it, pointing to its inscription within the tradition of  Antonio Berni’s collage and social realism, and the “garbage of the real”, to which Spicer’s text also makes reference.

Thus, the different parts and works in the show are in harmony and are linked to one another through art history, through the time and realities of diverse societies, through literature, through the value of artistic work. Are they the productive forces of art? We then feel that the whole exhibition becomes a poem, that as soon as it anchors us to a meaning and an experience, it immediately produces a new estrangement to make way for another meaning and another experience. It is one of those poems we are thankful for.