This retrospective at Proa is a major institutional accomplishment in a country where original criticism on Malevich’s art has circulated with increasing intensity. 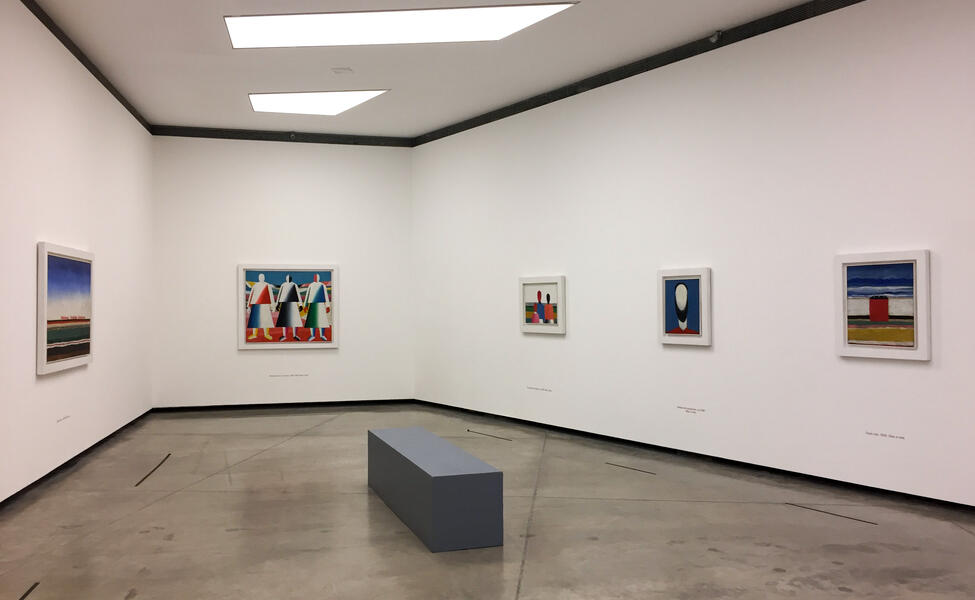 The retrospective of Kazimir Malevich (1878-1935) on exhibit at Fundación Proa includes works representative of all the moments in his production, from symbolist and cubo-futuristic explorations to emblematic works from his suprematist, supranaturalist, and Soviet periods that form part of the collection of the State Russian Museum in Saint Petersburg. The immediate precedent for this exhibition is the retrospective held at the Tate Modern in 2014 in collaboration with the Stedelijk Museum in Amsterdam—another institution whose holdings include a large number of works by Malevich. In Argentina, this retrospective at Proa is a major institutional accomplishment in a country where original criticism on Malevich’s art has circulated with increasing intensity. Malevich’s Black Square—its second version, dated 1923, is featured in the Proa show—was referenced in a pond of Chinese ink in a project that Martín Legón produced for the MACRo museum in the city of Rosario; the local translations of Boris Groys’s study of the Russian artist is a key point of reference for Argentine critics.

The viewer’s experience of this show indisputably revolves around what Walter Benjamin called the artwork’s “aura”—the experience of the here and now that photographic reproductions weaken and that the actual presence of the original underscores. In Malevich’s art, it is clear that the conceptual operation takes precedence over the formal execution. But, first and foremost, this exhibition places us before the materiality of something that has become a myth. A close look by an eye versed in recent research might detect variations in reflectiveness and opacity due to the use of different types of white, sketched lines visible on the painting’s surface, and cracks that evidence layers of paint. Indeed, in these times, those cracks are pregnant with both nostalgia and irony as a possible metaphor for a modernism now aged.

But we cannot think at such a distance from that modernism. The layout of the exhibition, which begins with Malevich’s studies in modern French painting and ends with his wake—mythified in Argentina in the aforementioned work by Legón—evidences that our chronological way of envisioning art history is not that different from Malevich’s. Aware of chronology as image of Meaning, he would on occasion change the date of his works to better place them in the arch of his artistic evolution.