Marinho sculpts and molds to seek not only the shape that emerges between his hands but also the emptiness yielded—that which we may not see so easily, but that is as real as what we do see, and as much part of the work. 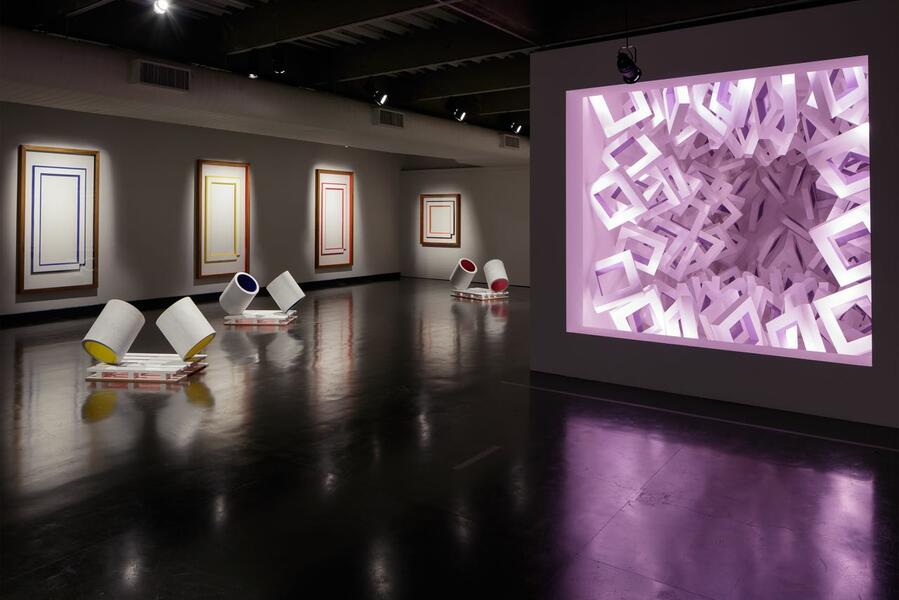 In “Cristalização,” his recent exhibition at MAM in Rio de Janeiro, Jaildo Marinho furthers an authentic search that runs counter to Winckelmann’s assertion that the perfection of classical Greek statuary lies in the absence of color. Indeed, Marinho embraces the use of bright color. Based on the color-space relationship, his work formulates a new vision, a new focus on color, which acts as a sort of multifaceted adjective as reds and yellows jump out to give the work a personal touch.

The exhibition’s central installation, “Cristalização,” is outright dazzling. Emblem of the exhibition as a whole, this work is a sort of crystalline structure that reproduces on museum scale the long process by which the mineral world takes shape pursuant to reductions and symmetries. Featured as well are a set of sculptures called Palette and two-dimensional objects.

Marinho’s painting-objects are conceived as a series and displayed on the museum’s walls. By creating hollows, the artist provides the works with a sort of “frame” capable of shaping three-dimensional neo-concrete spaces—something like an endlessly repeating emblem that reveals the scheme underlying the whole exhibition. The use of empty space as meaningful element is the work’s greatest strength. The bare walls, and the spaces between the works, turn the visit to the show into a sort of dynamic of repetition.

The exhibition features as well a series of sculptures entitled Palette. The usual relationship between a sculpture and its base, envisioned as uniting element and means to place the sculpture in the space, is questioned by making the most commonplace support—a shipping pallet—out of marble. Marble, in its nobility, undermines the triviality of the object—symbol of the world of logistics. Thus, the relationship between the sculpture and its base generates a tension that further complicates the symbolic dimension of the object.

Insofar as the show as a whole is conceived in relation to the notion of crystallization, Marinho imposes on himself, and on the viewer, the dynamic of repetition. Each of the surfaces acts as a mirror that reflects the venue as pure repeating structure. The exhibition could be seen as a twinning in the crystallographic sense: a conglomeration of crystals that constructs endlessly complex and rich symmetries around which these mirror plays are organized.

Heir to the concrete art of the thirties and to its influence, in the fifties, on artists like Helio Oiticica, Amilcar de Castro, and many others, Jaildo Marinho includes the function of emptiness in the object and in the sculptural space. Marinho sculpts and molds to seek not only the shape that emerges between his hands but also the emptiness yielded—that which we may not see so easily, but that is as real as what we do see, and as much part of the work.

The show will later be on exhibit at the Pinakotheke Cultural, São Paulo and Multiarte, Fortaleza.