The last exhibition by Juan Iribarren Scalamandre-Pfizer, which took place at the Carmen Araujo Arte Gallery in Caracas, was a "visual essay", a work that brought together different "means" and "ways" of image production, and took the form of an exercise (and also a game) of connections: coming and going, confluences and dispersions. A “visual essay” that, on the one hand, manages to synthesize in an “event” a large part of the artist's pictorial interests, and on the other, narrates a transit, a move. 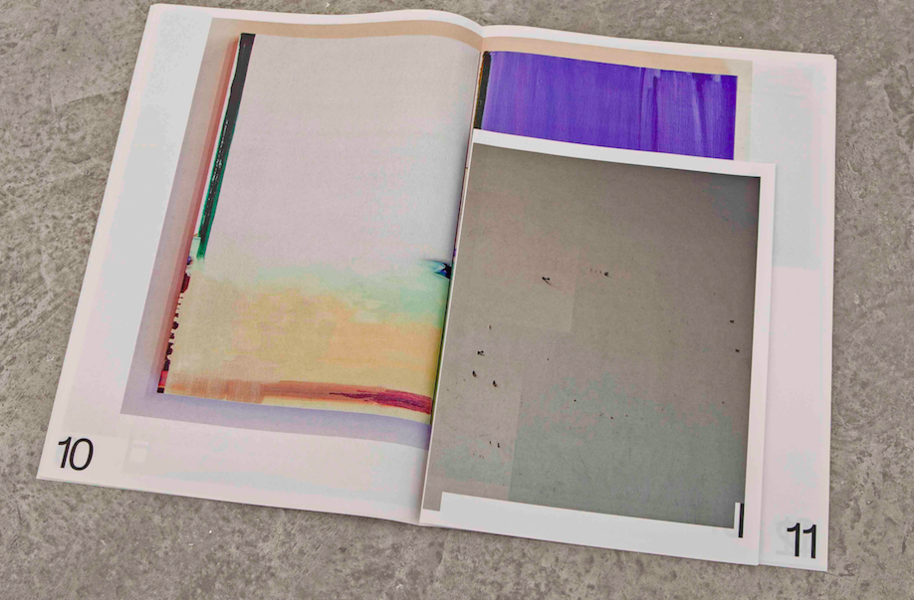 The "visual essay" arises from an experience: Juan Iribarren changed his workshop space, leaving one located in a "wooden building that originally had housed a factory for upholstery fabrics and wallpaper: Scalamandre" and moved into one in "an industrial building of fatalistic architecture turned into small start-ups and workshops, which had been previously the headquarters of a former laboratory and drug factory: Pfizer”. This "visual essay" describes - and discovers - this change, and therefore it becomes a "medial object" that poetically elaborates it. It should be held in mind that, for Iribarren, the "place" in which he works is not simply a neutral "location" or "continent", but an active part of his visual and pictorial elaborations, insofar as his work has always been linked to the exploration of how light, in conjunction with environmental and physical conditions, affects and transforms spaces.

In this "essay", each of the "spaces" is symbolically described. The walls of the workshop that he occupied for 14 years are “registered” in photographs that capture the traces left by his work, making visible his daily life scattered among holes, stains, nails and some walls inhabited by the remains of his sustained work. The new place translates into small paintings where color becomes a geometric structure and luminosity, and is imposed on the gaze as "a confrontation between atmospheres and a vertical below a horizontal: a pole and a lintel". Each one of them is metaphorically discovered: the photographs of the old workshop show the force of matter and its textures, the visual power that allows the "elemental" to show itself as abstraction and ideality, and reveal how the "Figures" and "forms" are produced from shades; from minimal divergences of values ​​and ranges. The paintings appear as "imaginary formulations" that physically concretize the phenomenon of perception. Therefore, in them, color becomes space and is donated simultaneously as configuration and sensation, becoming a geometric structure. This is how a formulated story draws the temporality of the transits (of the removals): the past is recovered –or remains- as a trace and inscription, becoming a support (wall) and acquiring an abstract (ideal) texture; the future (what is to come) is concretized as a phenomenon of the imagination, light and color, free play of lines and shapes.

Scalamandre-Pfizer establishes a counterpoint between photographs and paintings, between both descriptions and discoveries, which gives rise to a game of connections and distances. The photographs are located exactly on the limit, the border, between the pictorial and the photographic, they are visual exercises in which the image has detached itself from the areas of the register and has become subjective figuration, appearing as a “… conscious composition of the plane and in the plane (…) that highlights how relative tone and color can be ”. This pictorial condition turns them into evocative -alusive- images in which various moments in the history of abstraction in modern painting seem to have been transmuted into physical space. Indeed, some "walls" invoke pieces of suprematism in the way the planes interact, in others the gaps and wounds recall Fontana; all of them seem to demonstrate that theoretical and doctrinal thesis of modern art that intrinsically links abstraction with visual substrates of reality, with the way the world becomes visible.

For their part, the paintings that make up this “visual essay” affirm their structural presence, the vertical and horizontal ones become radical presences. Using color as a dynamic element, Iribarren generates tensions, alters planes and lines, gives rise to geometric structures that impose themselves as such even when they are constantly disturbed by the diversities that occur within the chromatic fields that constitute them. This "structural" commitment implies a small displacement, a turn, within their pictorial inquiry, which has consisted of interconnecting and transforming two apparently opposite situations in the modern pictorial tradition: on the one hand, geometric structures and their compositional games (the abstract tradition), and on the other, the presence of light and the various effects it causes (the atmospheric, gestural tradition).

The exercise and the game of coming and going, of confluences and dispersions, is consolidated and thus creates pictorial photography and phantasmatic painting. Indeed, photography becomes pictorial: the capture of light becomes materiality, the figurative (reproductive) character of its image is inscribed in footprints, gaps, small signs and wounds, the mimesis of the real is presented as an abstraction geometrically elaborated. The painting opens up to the register: light captures that are elaborated from chromatic games, chimerical and ghostly figurations that constitute structurally defined spaces, ungraspable presences in which the "plane" is disturbed thanks to the juxtapositions and chromatic contiguities.

At the beginning we said that this visual essay, Scalamandre-Pfizer, operated as an event that managed to synthesize Juan Iribarren's inquiry about the "pictorial image" and its ways of being and appearing. The event arises because the "visual essay" and the exhibition are specified in a 4-hand publication, together with the designer Ricardo Baez. A particular publication, which is not a catalog in the traditional sense, but is proposed as a "third image".

The publication is printed on a recycled paper (originally intended to be used for periodicals) that dirties, has an urban texture -ordinary- thanks to which it inserts the "works" in the graphic universe: hand and provisional, destined for immediate use and reproduction. In this sense, it is a publication that has to do "more with the structure and production method of his work rather than with the formal representation itself" (Ricardo Baez describes in Commentary on the design of Scalamandre-Pfizer. CLICK HERE to read more)

In this publication, the paintings and photographs are printed in two different formats (as if they were two different booklets), however they are joined –they appear contiguous- maintaining their differences (numerical and alphabetical pagination) to create constantly, with the passing of each sheet , in the visual route, a set of "other" images formed by the meeting of both booklets, images that "graphic", which only appear in the printed route, which give shape to this game of approaches and distances, confluences and dispersions which is the "visual test". The publication is, in itself, an essay of the “visual essay”, Ricardo Baez tells us: “The decision to assign a size to each format of his work (each encoded with a numeral and alphabetical folio) speaks of classifying and separating modes of production, but at the same time this decision causes joint images to be produced between the two expressions (…) a third image, which is produced through the communication channel of design and its graphic production ”.

Scalamandre-Pfizer is located in the spaces that mediate between the images, which can equally tell us about their distances and their closeness; fertile spaces in which diverse ways of conceiving and interpreting the image are opened and that, for this reason, allow the pictorial to be reinscribed in the artistic scene.