Surreptitious Stripes, an exhibition of work by Francisco Masó (Havana, 1988), was held from July 20 to August 19 at the Connect Now Room of the Arts Connection Foundation in Miami. 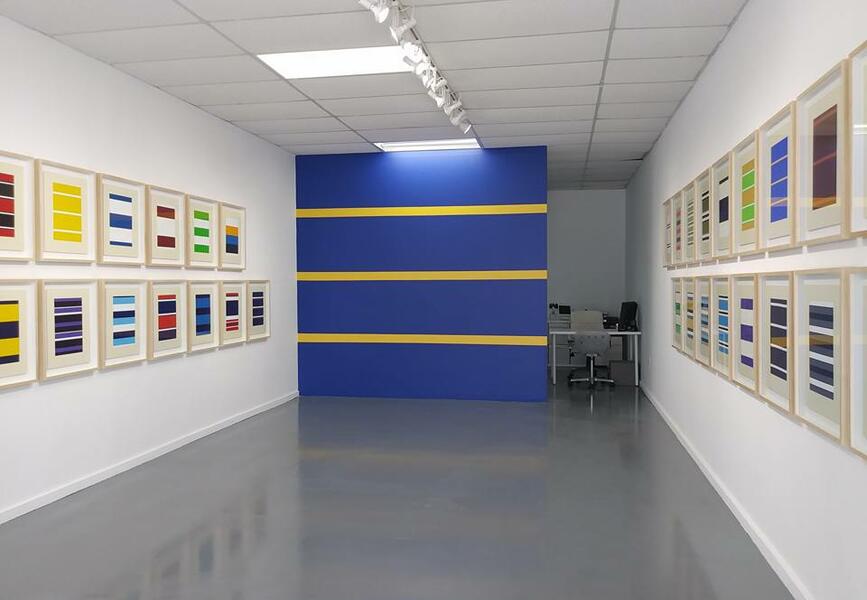 Surreptitious Stripes, an exhibition of work by Francisco Masó (Havana, 1988), was held from July 20 to August 19 at the Connect Now Room of the Arts Connection Foundation in Miami. Curated by the North + South team (Katherine Chacón and Jim Peele), the show encompassed two volumes—twenty pieces each—from Registro estético de fuerzas encubiertas, a series of abstract geometric paintings that Masó produced on the basis of documentary photographs and videos of scenes of repression in Cuba. The paintings replicate the patterns on the pullovers worn by the undercover agents in those scenes. Imported by the Cuban government and distributed to workers in political organizations, the garments with patterns of horizontal and parallel lines act as secret uniforms, often unbeknownst to the population.

Foucault’s formulation of the panopticon is the cornerstone of Chacón and Peele’s curatorial vision. The pullovers re-create the abstract functioning ofa surveillance device that, by seeing without being seen, not only ensures control and domination, but also normalizes conduct.

Francisco Masó’s artistic practice is enmeshed in the notion of the “relational aesthetic” that brings social relations and phenomena into the sphere of contemporary art. It also partakes of Tania Bruguera’s conception of “useful art” by which art is applied in order to change certain aspects of society.

In this sense, and as the catalogue to the show points out, “Registro estético de fuerzas encubiertas must be understood beyond the local problematic portrayed by the audiovisual documents that serve as its trigger[;] it constitutes a tangible instrument of social change, of transformation of reality.” The beauty of the lines of color and their patterns is what pulls us in so that we can go beyond an aestheticist vision and formulate a narrative on the tensions generated by the exercise of totalitarianism.

Interestingly, Francisco Masó is one of the few exponents of geometric abstraction in contemporary art from Cuba. He has degrees from the Instituto Superior de Arte’s, from the Behavior Art School directed by Tania Bruguera, and from the Academia de Bellas Artes San Alejandro.