Azar and Miño’s exhibition is not a literal commentary on “the remains of triumph;” its musicality opens up other horizons. 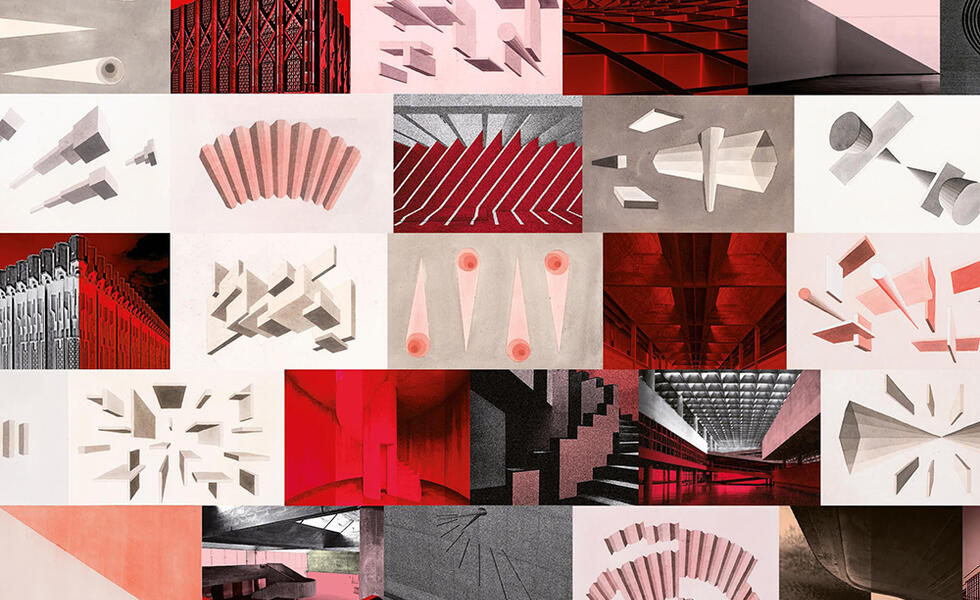 Amadeo Azar’s (Argentina, 1972) watercolors and Jorge Miño’s (Argentina, 1973) digital photographs converge in the utilization of a geometric language in Los Restos del Triunfo (Dos por Tres) [The Remains of Triumph (Two by Three)], a show featured at Fundación Jorge F. Klemm. In 2010, the curator Valeria González had already shown them side by side in an exhibition on the occasion of Argentina’s Bicentennial. Both artists, who generally work with the concept of series, also coincided years ago without knowing it in their interest in machines. At that time, Azar painted enigmatic gadgets and invented perspectives, while Miño photographed work mechanisms and devices.

Now they have come together and are connected through the inclination to highlight aspects of abstraction. The reference to ‘two by three’ is not related to the immediacy or the frequency of the images. It has to do with the refined work of these two artists, in a three­step exhibition. One of the paths comprises the individual oeuvre of each one of them, like Azar’s 72 folded paper pieces (pieza #1) and Miño’s large­format photographs (pieza #2). Another step presents their manipulation of each other’s work (pieza #4, 9 parts). After months of fruitful weekly meetings, they took another road and created a joint polyptych composed of alternating pieces, in which 25 watercolors by Azar hold a conversation with 25 photographs by Miño (pieza #3, 50 parts).

“We work with a series of parameters we ourselves have imposed with the aim of being rigorous with the question of the concept; this originated the idea of working with the three colors, red, white and black. The intermediate colors – the grays and pinks – that were presented were part of the possibility that we also handled; the thing is that for technical reasons, the watercolors in particular would never attain the intensity of the colors I endowed my photographs with,” Miño points out.

Visitors may be expected to rapidly associate shapes and colors with constructivism, the artistic and architectural movement that originated in Russia in 1914, probably set in motion by creators who were tired of the excesses of all kinds (including visual ones) committed by the czars. After the impetus of the first years of the October Revolution (1917), the geometric avant­gardes were pushed out of focus as a result of the official Soviet preference for “socialist realism”, that is, propaganda. But Azar and Miño’s exhibition is not a literal commentary on “the remains of triumph;” its musicality opens up other horizons.

The rhythms of the rises and falls, interrupted and repeated, that may be perceived in Miño’s photographs have their counterpart in the harmonies of Azar’s small watercolors on folded paper. It is true that it is possible to find in the wonderful polyptych created by both artists, connections with other artists (Roberto Aizenberg, for example) and reflect on art history in general. But perhaps it would be better to observe the tones, listen to the melodies of the shapes and the colors, immerse oneself in the depths of the lines and their rabbit trails, leave the mind at rest and let the imagination loose.