Cotina was not a professional photographer but through the lens of his camera he captured the loneliness, the fog and the beauty of the everyday in a way that had never been seen before.
By Beatriz Sogbe 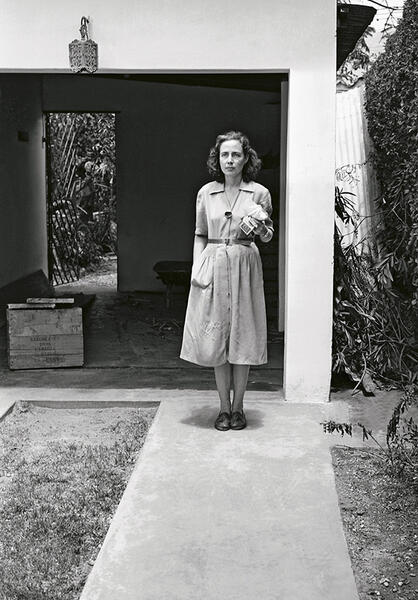 Alfredo Cortina (Venezuela, 1903-1988) was a pioneer of radio and television in Venezuela. He was a writer of comedies and an actor. Cortina wrote the first Venezuelan soap opera and became very famous locally in 1933, when the first thriller, El misterio de los ojos escarlata (The mystery of the scarlet eyes) was broadcasted on the Venezuelan radio. It is said that the country came to a halt to listen to it. He was a jeweler, a cabinetmaker and a watchmaker. In fact, after visiting his home in Los Rosales anyone would understand that Cortina could excel at anything he chose to do. The area became known because  together with his wife, the poet Elizabeth Schön (Venezuela, 1921-2007) and her cousins, Ida and Elsa Gramcko, a poet and a painter, respectively, they shared it with artists Alejandro Otero and Mercedes Pardo, with the poet Alfredo Silva Estrada, the dancer Sonia Sanoja and the Zuloaga family, patrons of artists. A house full of surprises and of objects made by Cortina, for whom nothing seemed to be impossible.

Cotina’s photographic work was totally unknown. He was not a professional photographer – as Luis Enrique Pérez Oramas reiterates rhythmically and cleverly in the catalogue text – but through the lens of his camera he captured, in black and white, the light of the tropic, the loneliness, the fog, the abandonment and the beauty of the everyday in a way that had never been seen before.

In 2012, his work was exhibited at the 30th Sao Paulo Biennial, curated by Pérez Oramas. In 2014, twenty۔five of Cortina’s photographic works were incorporated in MoMA´s collection. The photographs exhibited in Sao Paul have been a revelation for many people, since Cortina managed to surprise the viewers by the choice of the themes depicted in his works. Zealously kept for decades and never exhibited before, they reflect a thorough knowledge of photographic techniques and composition.

In all of the images the leit motiv is his wife, Elizabeth. She does not appear looking at the camera or in habitual everyday life poses. Schön poses, but in an enigmatic way. She is absorbed, as though she were absent. But her absences do not reveal a state of reverie; rather, they guide our gaze and generate questions. Who is she looking at? What does she want to tell us? Why? There are so many ‘whys’ in these works.

Each image is perfectly framed. The theme does not seem to be an intuitive one, since there are several coincidences. Some of them are close to the points of interest in the golden rectangle. In others, the framing composes imaginary frames, in the spaces. She is always the center, the focus of attention. It is always Elizabeth that captures the gaze of the viewer: beautiful, young, extremely serene. She is also the guide to scale and proportion. And she is the one who conducts the theme and provokes in us an obsession for watching what she is watching – although this may sound like a contradiction. It is evident that Alfredo was fascinated by his wife’s beauty. And with good reason. She was a poet, she was sensitive; she was Elizabeth. Her friends said that Alfredo had such vitality that she felt overwhelmed by it. But those of us who knew Elizabeth were aware of the fact that she was so special that she turned the usual into something extraordinary.

We would like Cortina to be with us so that he could tell us about his work. Or that at least Elizabeth were here. Or maybe not. Because deep down, we prefer to make our own speculations about something that will never die: the passion for beauty, the landscape and aesthetics.