Beyond specific description, Agustina Woodgate’s works are of interest because the product of careful research; they are objects that set off a poetics that brings to a halt the relentless mechanism of late capitalism and its complex socioeconomic system to open up interstices of subjective flight. 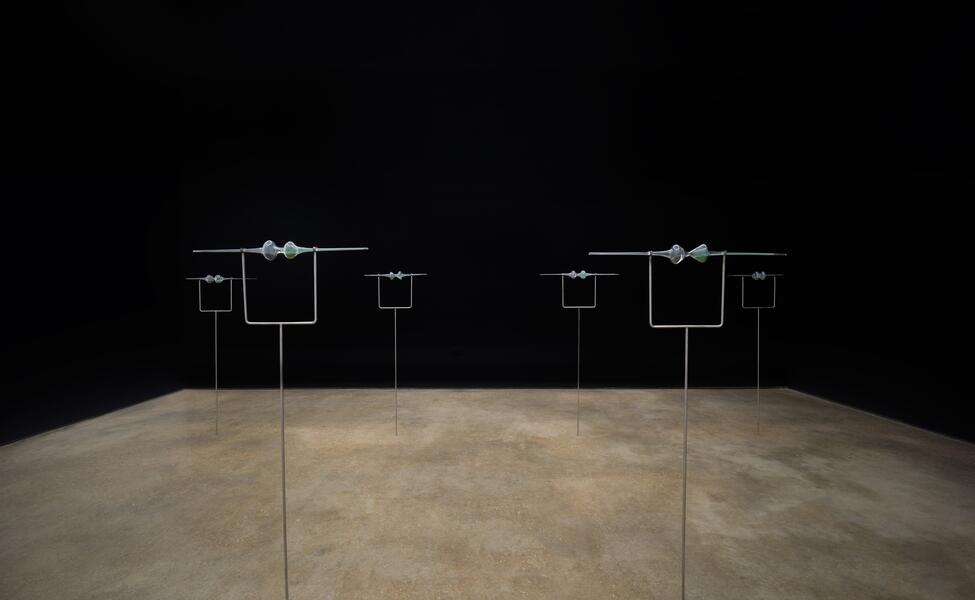 The installation National Times is a perfect example of mechanisms designed to interrupt or to alter the incessant flow of the modalities that control our lives. In this work, Woodgate (Argentina, 1981) effects a defamiliarization that enables us to perceive the functioning of those modalities. The work was conceived in Washington, D.C, where the artist was invited by the D.C. Commission on the Arts and Humanities to present Radioee.net, a nomadic and multi-lingual open-format radio station that always addresses the same topic of conversation, mainly mobility (and, therefore, immigration). The radio project tours from city to city in order to create networks of “encounter, debate, reflection, and criticism of a collective nature” to “decentralize and demonopolize information networks.”

The first Sunday in November is the day when the clocks are set back in the United States and, as a result, it has a total of twenty-five hours. For all of them, a conversation with that number of participants—among them an astronomer from the United States Naval Observatory—took place. The conversation, which was aired from a truck, discussed policies that regulate public time. National Times was the fruit of that nomadic conversation that ensued while the truck drove around the city, visiting places like 16th Street, where the Washington Meridian—the place latitudes and time were marked before the Greenwich Meridian—was located. Woodgate explains that “control of time is a control of power”: the GPS run at the naval observatory in Washington is only made available to certain countries. National Times consists of forty-one clocks taken from an old elementary school; they are set up such that one of them is connected to a satellite and, hence, controls all the others. Though the clocks that were activated on September 5, Labor Day in the United States, should be in synch, they end up showing different times. Woodgate has altered the minute hands so that they slowly erase the numbers as they make their way around the face of the clock. In their flight from time itself, they mark a poetic act of liberation.

In another installation, Woodgate makes use of blown-glass hourglasses that hold the damp air of Florida as well as the amount of the minimum wage in that state: in each hourglass, $8.05 was pulverized. That amount is the title of a piece that dialogues with earlier works by—for instance—Duchamp, Meireles, and Claire Fontaine, a work exposed to the unpredictable action of time. 8.05 reflects the instability of the minimum wage while also exercising resistance by affirming the value of time that is art: the piece does not cost the minimum wage times ten, the number of hours it took Woodgate to pulverize the eight bills. It costs, rather, $6,000—a sum that validates how long it took the artist to envision a piece of undeniable formal beauty and critical power.