The exhibitionfeaturing works by the photographer Adriana Lestido  at Rolf Art, displays two impressive and beautiful photographic essays, developed in Mexican territory in 2010. 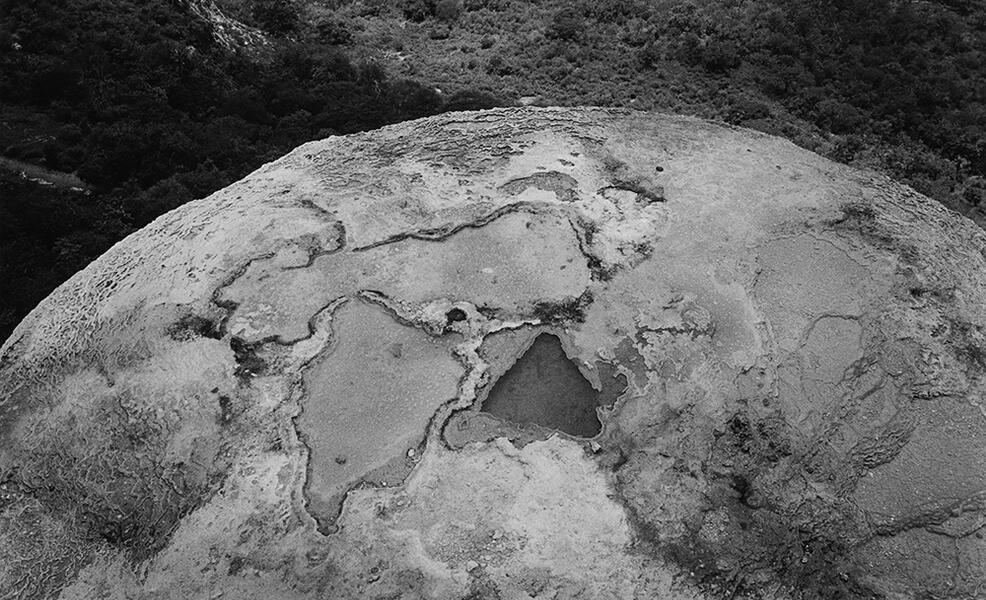 The exhibition México, featuring works by the notable photographer Adriana Lestido (Argentina, 1955) at Rolf Art, displays two impressive and beautiful photographic essays, developed in Mexican territory in 2010. The interview México – which lends its title to the exhibition– is the product of an invitation from the Mexican photographer and curator Patricia Mendoza, to capture photographs of forest areas on the occasion of the International Year of Forests. The other series, Hierve el agua (The Water Boils) takes its name from an eponymous place located 50 kilometers away from Oaxaca. In this place there is a system of petrified cascades where the water literally boils.

When Lestido started working as a photojournalist in 1982, her photograph Madre e hija de Plaza de Mayo (Mother and daughter of Plaza de Mayo) – a woman wearing a white scarf on her head, holding in her arms a little girl who is also wearing a white scarf, both of them demanding, with an identical gesture, the return of a missing loved one – had an unusual impact. That image became an emblematic symbol of her trajectory, which includes photographs that in the 1990s, addressed a world of women (or rather, an absence of men) in prison, teenage mothers, mothers and daughters. Then came her landscapes and austere interiors, which only occasionally included a masculine figure.

In 2005, Lestido delved deeper into splendid natural landscapes on the Argentine coast, anticipating these photographs that dwell mainly on the superb landscapes of Durango, San Juan Nuevo de Michoacán, Ixtlán de Juárez, Oaxaca, Quintana Roo. In small format, the images in México, curated by Adriana Lauría, do not only illustrate the cycle celebrated by the United Nations in 2011, highlighting the need to build awareness of the fact that we must protect forests and prevent deforestation. The photographs also reflect the wish of the artist, of the viewer, to become one with nature.

In the generous forests captured by Lestido, with trees standing upright like prayers to heaven in the midst of dawn, we may sense the existence of a multitude of living beings – perhaps microscopic or fearful, and not seen for this reason – that preserve the balance of the ecosystem. The presence of the human being reverberates there, a presence that appears in other pictures cutting down and transporting trees, replanting different tree species.

In this series, Lestido stresses the poetry of these incomparable vistas, and as she usually does, she contributes her political vision. Amidst the brightness of fires, she portrays workers by a coke oven; they look exhausted. She shows trees injured by the actions of man, who since pre­Hispanic times, has extracted the resin with which chewing gum is produced.

During her journey, Lestido made a stop at Hierve el Agua, a region of difficult access and covered with semi­desert vegetation. It is a place of archaeological interest (because of its complex irrigation system and terraces built by the Zapotecas some 2,500 years ago) and also of interest for tourism (because of the rock formations that may be found in the cliffs).

Through the eyes of the artist, the frames capture landscapes that seem otherworldly, as if they were part of a daydream. Like all the photographs in the exhibition, the analogical shots in black and white in Hierve el agua lead the viewer to a perplexed silence, perhaps to a connection with the ever­surprising nature, to a moment of meditation.