Durban Segnini Gallery celebrates its twenty۔third anniversary at the local level and forty۔five years of existence, with an alluring collective exhibition.
By Janet Batet 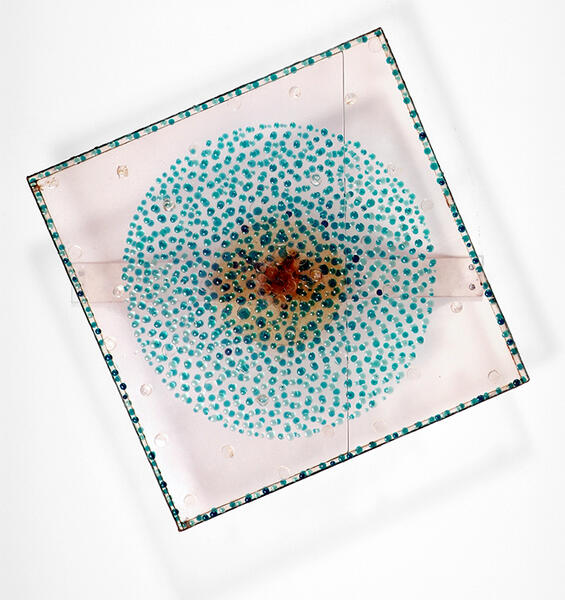 Of special interest is the presence of Fountain (Paqcha IV), 1993, by César Paternosto. Imbued with the architectural tradition and reflecting the irrigation systems of the Incas, the totemic structure, whose title is a double clin d’oeil (to the Pre۔Columbian culture and the Duchampian ready-made), is a reliable testimony of the legacy of the principles of constructive universalism promulgated by Torres-García.

In the same exhibition room, the works of Arden Quin underpin another crucial trend within Latin American concrete art which would soon have followers all over the world. Madí IIA (1945) and Labyrinthe (1948) evidence the commitment of the Madí group, concerned with the exploration of non-objective expression through pure and irregular geometric shapes and contrasting colors imbued with a sense of play that separate it from Torres-García’s tradition. The works included attest to the ways in which the so-called “shaped canvases”, which would at a later stage become a recurring element in what would be known in the United States as “hard-edge painting”, represent an early incursion of the Madi group starting in the mid-1940s.

But without a doubt, the delicatessen of the show is Gyula Kosice´s historical jewel, Revolving Water, 1964, included in the final bend of the gallery. The founder, together with Arden Quin and Rhod Rothfuss, of the iconic Madi group, Kosice is a fundamental figure in the development of kinetic and light art. His interest in the exploration of space, light and water marks this visionary artist’s entire production.

Revolving Water is a delicate structure made of Plexiglas that hosts color beads which, like translucent pebbles, allow the water to run, animated by the viewer’s hand, in a circular current that incorporates not only the kinetic element but also the aural one. The delicate sound of falling water and the subtle rhythm of movement result in a piece endowed with exceptional evocative power and beauty.

A genuine example of the “water architecture” posited by Kosice in his 1959 manifesto, in which he sustained the need to incorporate not only movement to the artwork but also the source of energy as a component part of it, Revolving Water summarizes the artist’s interest in incorporating water as an aesthetic material, an elementary natural component and a source of energy par excellence.

Abstraction and Constructivismis a pleasant revisitation, a bird’s eye view of the Latin American abstract-concrete adventure.