For my nineteenth posting of the Getty-led initiative exploring Latin American and Latino art in dialogue with Los Angeles, we will look at the Skirball Cultural Center’s exhibition ANOTHER PROMISED LAND: ANITA BRENNER’S MEXICO on view from September 14, 2017 through February 25, 2018. The exhibition celebrates a Mexican-American Jewish cultural trailblazer featuring works by luminaries of the Mexican Renaissance including Diego Rivera, José Clemente Orozco, and Frida Kahlo. The Skirball Museum Director, Robert Kirschner, points out that the museum’s participation in PST: LA/LA fully aligns with its mission to bridge people of diverse heritage and history while learning about its neighbors and consider how it represent cultures that are not their own. This posting is adapted from the museum’s press release in English. 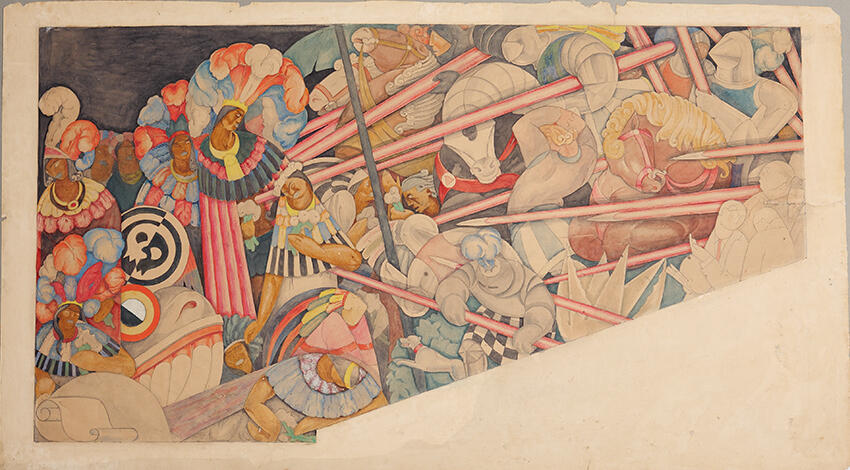 Another Promised Land: Anita Brenner’s Mexico illuminates the life and work of one of the most fascinating cultural figures of twentieth-century Mexico, Anita Brenner (1905–1974). A Mexican-born journalist, art historian, and anthropologist of Latvian Jewish descent who spent part of her youth in Texas, Brenner chronicled the Mexican Renaissance of the 1920s and played a vital role in introducing Mexican art and culture to American audiences. Through more than 150 objects—including artworks by close friends Diego Rivera, José Clemente Orozco, Edward Weston, Jean Charlot, and Frida Kahlo―the exhibition underscores her efforts to build a cultural understanding between the United States and Mexico.

As the child of Jewish immigrants in Mexico, and herself an immigrant to the United States, Brenner often found herself in the position of the outsider. This sense of self informed much of her work. She fought against prejudice she faced as a Jew. And as a Mexican-American, she worked tirelessly—through her books, articles, poetry, and the tourism magazine she founded and edited—to create a favorable image of Mexico in the minds of Americans. Another Promised Land: Anita Brenner’s Mexico opens a conversation about the complexities of nationality and identity on both sides of the border by weaving together Brenner’s story with the history of Mexico and its relationship with the U.S. in the twentieth century.

A Jewish Girl of Mexico traces Brenner’s background and early childhood from her birthplace in Aguascalientes, Mexico (1905) to Latvian Jewish immigrant parents. Brenner moved as a young girl to San Antonio to escape the violence of the Mexican Revolution (1910–1920). In both Mexico and the U.S. Brenner was ostracized for her foreignness and Jewishness. This dual discrimination found its way into Brenner’s consciousness of her identity as both a Mexican and a Jew.

Idols Behind Altars is also the title of Brenner’s 1929 book, a seminal work on Mexican modern art. In combining folklore and history, she paints the story of Mexico in broad strokes, recording her firsthand impressions of the artists and their work. For Idols Behind Altars, Brenner commissioned Weston and Modotti to photograph Mexican art and cultural sites to illustrate the book.

Art and Revolution narrates muralism and the ways it emerged as an art form suited to political content. Rivera, Orozco, Siqueiros, and Charlot’s popular mural projects in government buildings around Mexico helped these artists secure mural commissions in the U.S., resulting in some of the greatest and most controversial public works of art in this country.

Projections of a Changing Mexico addresses Brenner’s work to promote tourism in Mexico using the country’s cultural heritage as a point of attraction. Her guidebook Your Mexican Holiday (1932) and tourist magazine Mexico / this month (1955–1971) encouraged Americans to travel south of the border to experience Mexico and its people. The last section features art from the 1950s though 1970s by several of Brenner’s friends, including Mathias Goeritz, Leonora Carrington, Pedro Coronel, and Myra Landau. Their works reflect Mexican artists’ involvement in international movements like geometric abstraction and surrealism.

Roots in the Land looks at Brenner’s final years, her return to her family’s ranch in Aguascalientes, and her efforts to revitalize the ranch as a commercial agricultural operation with elements adapted from the Israeli kibbutz model. This section considers how Brenner dealt with the legacy of the Mexican Revolution, particularly its call for land justice.

Major support is provided by grants from the Getty Foundation. The presenting sponsor is Bank of America. For additional information on grants and related programs, see www.skirball.org
Stand by for our twentieth posting on LACE, Juan Downey: Radiant Nature.