In the heart of San Felipe, a northern Bogotá neighbourhood in process of gentrification, there is a building where more than 20 artists from all over the world work, talk and coexist. Each one has his own workshop and does part of the activities of the curricular program, which includes encounters with curators, theorists, and leaders of indigenous communities among others. Founded by curator José Roca in 2016 The Flora School residence turned Bogotá into a meeting point for a diverse group of people interested in art. The reasons why artists choose this residence are many, although everyone agrees that the experience in Bogota represents an important moment in their career. Here are some of the 2018 residents: 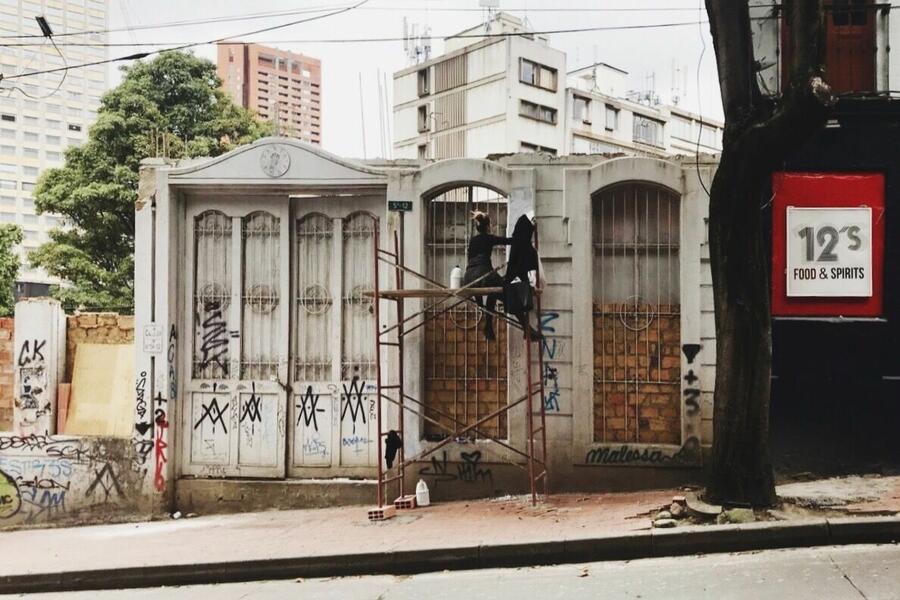 "I applied to Flora because I am very interested in Latin America, in working with processes that have to do with postcolonialism and Flora was the best residence I found to deepen this and stay in the region", says Andrea, who is with the Elisa Estrada scholarship. "I also wanted to stay in a city for a long time, so I could concentrate on a big project. I was interested in Bogotá because of its history. I work a lot with memory, and it seemed like an ideal place. I love that there is an intensive and solid program of seminars. " The practice of Ferrero (Lima, 1981) focuses on finding places that are no longer or will be demolished and, through the molds, latex or iron sculptures, evidence the vacuum left.

On April 9, 1948, the history of Bogotá was cut in two parts with the assassination of popular leader and presidential candidate Jorge Eliécer Gaitán. This event, known as the “Bogotazo”, led to the destruction of the center of Bogotá and, for some historians, it is the point of departure for the violence that the country is currently experiencing. The courthouse suffered serious damages during the mobilizations and, instead of restoring it, the government's decision was to demolish it. Ferrero takes the Courthouse as a symbol of the memory effacement of the city. Because of the power of this image, she is exploring the possibility of making a work that is located in public space for the first time. The idea is to try to replicate, with some liberties, the arch of the courthouse and locate it outside the Gabriel García Márquez Cultural Center, which was the place where it was originally.

This interest in public space, as well as a search for a more plastic/ free process, which is not

specifically based on research and design in Sketch-up, are the changes Andrea has felt since entering the residence.

Caroline (Lincoln, 1983) has been living in Colombia for 5 years, but her insertion in the professional art circuit is getting stronger this year with her participation in the School, with a scholarship from the British Council. Before coming to Colombia, her work was focused on the academy. At the beginning, she spent all the time in the workshop but then, she felt ready to enter and dialogue with a community. She started to have contact with curators, other artists, in order to have a more deeper experience. Caroline investigates the city and the traces of political and social life in objects and places.

Peña-Bray searches acts of survival experienced by people living in the marginal neighborhoods of Bogotá every day. This research began 3 years ago, when she was a photographer in a study of the Department of Economics of the Universidad de los Andes that sought to deliver washing machines to communities. This project involved going to the houses to see in what conditions they lived and then, to be able to find the best way to support them. She recorded all the ways in which they modified the houses to make them more habitable and is now reproducing some of them in building materials, doing some kind of homage to this confrontation with the city.

Being in Flora has been a very rewarding experience since the residence has taken Caroline out of her comfort zone and has opened her eyes to other cultures, to different ways of expressing herself and of perceiving the works. It has also been an opportunity to work more intensely, since the residence has coincided with the entrance to kindergarten of her son Mateo. In Flora they have recognized that the artist has a family life to attend and they have supported her by accommodating the schedules, making sure that she can participate in all the activities.

From Central America, more specifically from Honduras, comes Pável Aguilar (Tegucigalpa, 1989), where he skilled in classical music, focused on the violin and completed a degree in audiovisual communications. His artistic practice is focused on the translation of sounds, taking them to the visual plane in a wide range of supports. His work talks about the conflict and the actors involved in it and that is why Colombia, with its wide history of violence, is an ideal place to continue with its investigations.

Before Flora, where he is with the Luis Javier Castro scholarship, Aguilar was in Germany, in a residence in Chemnitz, near the border with the Czech Republic. His final project was "Sin-phonia" in which he collected interviews he did to the military in Germany and Honduras about the motivations for joining the militia. He was surprised that the reasons are the same, the search for economic stability, although the contexts are different. The artist translated these testimonies into scores and sound, to invite different readings. He is interested in incorporating interviews to this project that he can do in Colombia. He is also working on the speeches by Jorge Eliécer Gaitán, which he seeks to transform into music boxes. He has taken them to the plastic plane with magnetic graphite, which invites manipulation. What Aguilar is interested in with this piece is that it does not matter if the visitor agrees with the speech or not, his fingers are stained after the interaction.

One of the most tangible results of his residence so far is the collaboration he made with Manuela Ribadeneira, from Ecuador, who is exhibiting in the Flora Projects Room. After visiting him in the studio, she invited him to musicalize the natural phenomena that she was exploring for this exhibition.