The Fundação Bienal exhibits Vento [Wind] from November 14 to December 13 at the Ciccillo Matarazzo Pavilion as part of the program of the 34th Bienal de São Paulo – Though it’s dark, still I sing. 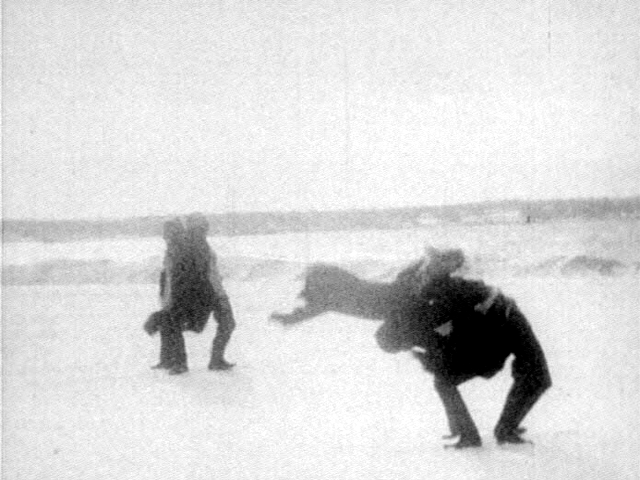 The exhibition, titled after Joan Jonas’ film Wind (1968), includes mostly immaterial works (in audio or video) and seeks to emphasize a sense of space and distance that can rarely be experienced by the public at exhibitions and events usually held at the building. No exhibition walls will be built for this show, and the architecture of the Ciccillo Matarazzo Pavilion, 30,000m² space, will remain in its original state, welcoming the artworks directly, without elements to create a mediation between the human scale of the works and the monumental dimensions of the pavilion.

Jacopo Crivelli Visconti, chief curator of this edition of the Bienal, has stated about this show: “The distance between the works, many of them made with sound alone, is the most striking characteristic of this stage of the exhibition, and acts as an invitation to pay attention to things we cannot see or hold in our hands, but which have a profound influence on our lives, now more than ever. It is thus an experimental gesture, the realization of a desire to make tangible that which, by its very nature, is not: the space between things, the void that, like a mold in constant transformation, reflects and mirrors the shape of the world. (…)

In a recent conversation with Carmela Gross, discussing the title of the 34th Bienal – Though it's dark, still I sing – Gross said something that stayed with me: ‘The It's dark is something that is given, but singing is something within our control. The I sing symbolizes an effort that happens through our action’. (…) It's almost always dark when the Tikmũ’ũn start to sing. Their songs, some of which permeate the exhibition, summon the spirits of every thing that makes up the world, of what we can and cannot see. The Tikmũ’ũn, or Maxakali, are an indigenous ethnic group originating from a region that encompasses parts of what are currently the states of Minas Gerais, Bahia and Espírito Santo. After countless episodes of violence and abuse, recurrent since the colonial era, the Tikmũ’ũn came close to extinction in the 1940s and having been forced to abandon their ancestral land in order to survive, are today divided in villages distributed in the Vale do Mucuri. Life in the villages is organized around a rich repertoire of songs, which evoke their rich cosmology and form a catalogue or an archive of all the elements present in their lives, including plants, animals, places and objects. Many of these songs are performed collectively, and their aim is often curative. Among the Tikmũ’ũn, the act of singing is an integral part of life, because it is through song that they preserve the memories that make up the community. Each member of the community is responsible for a part of the songs, which in turn belongs to a spirit (Yãmĩy) who is summoned and nourished in the singing ritual. Together, the songs compose the Tikmũ’ũn universe, which consists of everything that these people see, feel and interact with, but also of the memories of plants and animals that no longer exist, or that remain in the places they had to flee from in order to survive. As a community, they live in the language they still practice and vigorously defend. Singing.

It's hard to imagine a more poetic, coherent and compelling metaphor for solidarity in these times: a community in danger, where each person depends on the knowledge and memory of others to keep going, for everyone's world to keep existing. The community's strength is constantly renewed in the collective naming and constructing of the universe: each set of songs is indispensable in the revival and reaffirmation of the whole. (…) it reminds us of the importance of not losing the will to sing. That is, even in challenging, threatening and dramatic times, of not losing the simple courage to recognize and sing about the beauty of animals, both big and small, of the fragile grass creeping up the flourishing trees, of the powerful river and the almost immaterial mist, of the sun, the moon and the stars, of the earth where we plant our feet, and of the wind.”