Ruth Benzacar Art Gallery presents Horizon of Event, the new exhibit of Tomás Saraceno in Argentina, after his successful experience in the Museum of Modern Art in Buenos Aires. 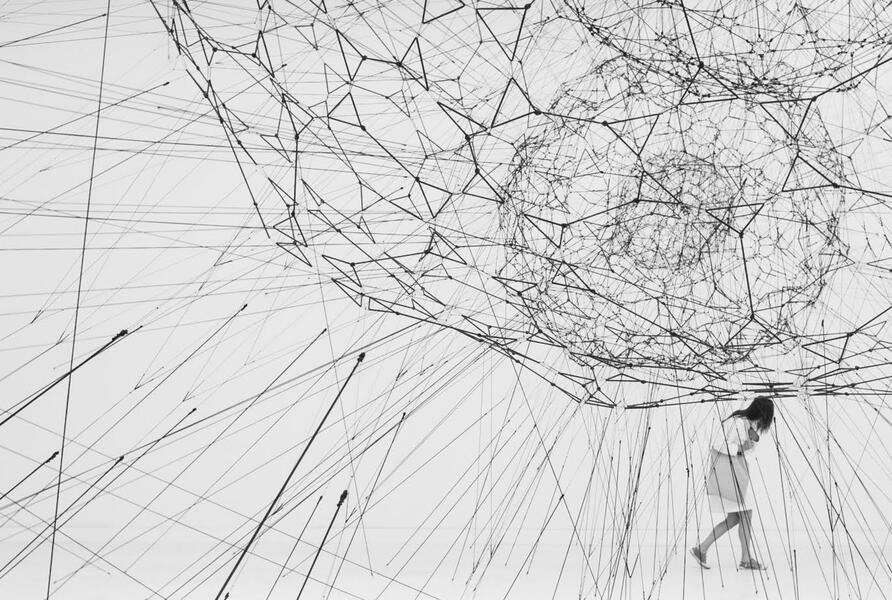 Horizon of event brings together the recent researches of Tomás Saraceno on the universe, understood as an expanded domain of interconnections, and on "Cloud Cities", his vision of modular and transnational cities in the air. Models of sustainable and emancipatory constructive practices, their floating and interconnected sculptures generate a scenario that speculates with alternative forms of cohabitation and seeks to reach an ethical commitment to the atmosphere and planet Earth.
Nourished by the world of art, architecture, astrophysics, natural and social sciences, Tomás Saraceno's artistic practice is a sequence of trails, paths and constellations that reveal the relationships between the microscopic, the global and the cosmic. In this way, the sculptural works "Zonal Harmonics", composed of orbits sustained purely by their mutual tension, speculate on the variations of speed and geometry of the trajectories of celestial bodies and their relation to each other in space and time. The physical dynamics transmitted by the works extend from the microscopic particles to the planetary gravitational forces. Configurations float in space; The arches seem to bend, recompose and join as molecular helical structures; Inside, filaments trap tiny universes ... Universes that Saraceno finds again in the complex three-dimensional cobwebs, not perhaps considered by cosmologists analogies of the "cosmic network" in which we inhabit, and which the artist has investigated with arachnologists and scientists during More than a decade.
Saraceno has addressed the key principles of social organization: cooperation, co-habitation and hybridization. These principles are materialized in the prototype of "City-Clouds" exhibited in the space of the gallery.
Suggesting a conceptual shift from attention to phenomena more than human, Saraceno reminds us that we all float in a cosmic cloud, and proposes new sustainable and ecological ways of living on Earth by imagining possible alternative futures.