Curated by Fernando Cocchiarale and Fernanda Lopes, the exhibition is part of Programa Intervenções, which commissions visual artists to create projects for external areas of the institution. The opening date, September 2 - date that marks two years of the tragic fire that destroyed the Museu Nacional - the work Noite de Abertura presents a video and a sculpture by Thiago Rocha Pitta, both newly commissioned. 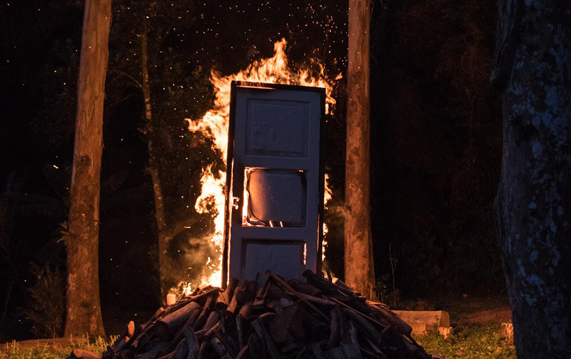 The artist from Minas Gerais, based in Petrópolis (RJ), constantly engaged in promoting transformations of material, took as a starting point the relationship between inside and outside spaces of the museum. The study of a formulation on analytical topology, called "clopen", states that the concepts open and closed would not be one of rupture, but cyclical continuity. According to this principle, in a clopen system it is possible to be simultaneously open and closed, inside and outside.

In the foyer of MAM Rio, The Clopen Door, a large projection, will present an unprecedented film in which a fire burns continuously, until total destruction of a wooden door located at its highest point. Thanks to the architectural configuration of the place, the image goes beyond the limits of screen and reflects, not only on the black granite floor, but through the glass walls of the museum, transforming the space into a large fire image.

The video will be presented to the public daily only at the times when the institution is closed: always from sunset until 10 pm. “It is an innovative experience for the museum to receive a work that will be activated only at night, during the closing period”, evaluates Fabio Szwarcwald, executive director of MAM Rio.

In the free space designed by Affonso Eduardo Reidy, a sculpture will be installed that appropriates the structure of a fire waiting to be lit, with a door fixed on its top, like the one that burns in the video. The wooden door, that comes from the artist's house in Petrópolis, will contrast with the museum's modernist architecture.

"I have been burning this door for about three years, maturing the work as sculpture and video. It is interesting that it is publicly established at the moment when we see a problematization of open-closed also in the political field. The fire of Museu Nacional, which is a scientific and educational institution, it was a great voodoo of what happens today in Brazil. We can associate that fire to the burning in Amazon, the extermination of indigenous populations and the dismantling of education and culture. In 2018, anthropologist Eduardo Viveiros de Castro proposed that the building be left in ruins, with its ashes, as a monument to our ignorance", recalls Thiago.

According to the curators, the use of fire and images related to it (like the bonfire) is one of the elements that mark the trajectory of Thiago Rocha Pitta, who in the last two decades has been developing a reflection based on the observation of the time actions, nature phenomena, chemical and physical reactions, the "ruinification" of things, and transformations occurring at the planet. "Fire is considered the greatest achievement of human beings in Prehistory. If in the Middle Ages, alchemists believed that fire had properties of transmutation of matter, transforming ore without value into gold, there are many cases throughout history when fire played a destructive role", comment Cocchiarale and Lopes.

Pitta warns that the work is not a celebration. The artist creates a space that is no longer a place of representation to become an environment for action. "It is a very painful memory, but necessary for it not to happen again. That fire is still burning", he says.