THE OVERCOMING OF WAR

In the new headquarters of the waldengallery (Buenos Aires, Argentina) located in the historic Center of Art and Communication (CAyC) founded in the 60s by the famous essayist and culture manager Jorge Glusberg, Magadalena Jitrik presents La superación de la guerra (The Overcoming of War). Under the curatorship of Raquel Masci, the exhibition develops a sort of anthology that brings together artworks produced from the 90s and in the present and that reveal the formal and thematic elements that cross the career of a key artist in the contemporary Argentine scene. 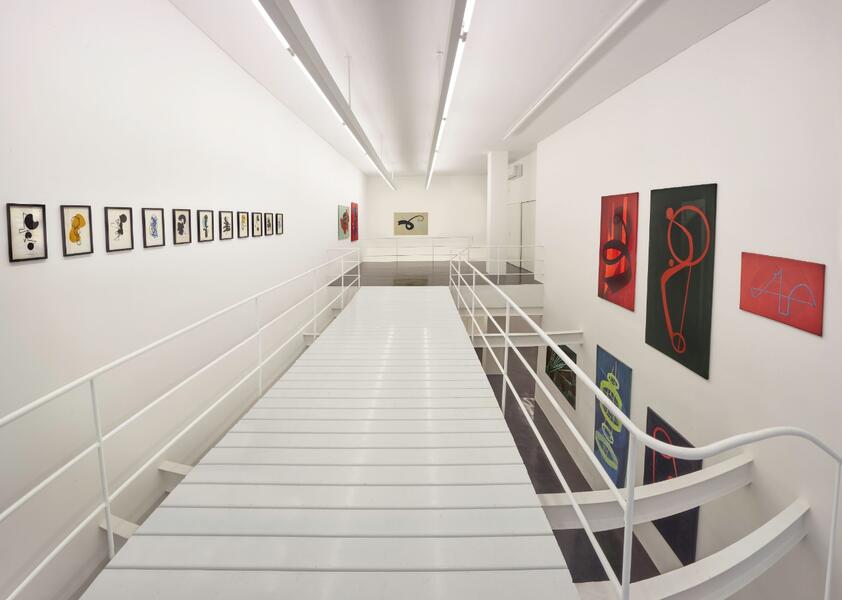 Constituted, mainly, from a series of paintings, the works that make La superación de la guerra establish a dialogue between the origins and the present, and these two "moments" within their stylistic and conceptual resources. Putting the focus on this relationship and the possibilities offered, according to Karl Marx, the dissolution of inequalities for the overcoming of conflicts, Jitrik highlights the dialectical relationship -in terms of the technical and formal aspects of the artworks- that exist between the set of paintings from the 90s and those that he recently produced. "In the year 1995, I had titled a series of paintings with phrases of revolutionary literature, among which there is one where you can see a middle trunk there as if flying," the artist explained in an interview for the cultural-site Palabras. "And two years ago, I made several sculptures on a trunk for a show commemorating 100 years of the Russian Revolution. Clearly, at some point, the association between that 1995 painting and these 2017 works for me is inevitable. "

In this way, the work of Jitrik, synthesized in the exhibition that opened today in the waldengallery, oscillates between two historical periods with transversal points. On the one hand, her works from the 90s  -period in which the artist was part of the Rojas Cultural Center and in which she was awarded the Kuitka Scholarship (1993) -, associated with issues and political "battles" of international character; on the other, a group of paintings anchored in the social and political swings of present-day Argentina. This is how in the same gallery they dialogue a wooden sculpture with the oz and the hammer, and a painting that questions the whereabouts and destiny of Santiago Maldonado. Regarding this conversation that seems to occur from two opposite poles of a parabola, Jitrik stressed that "there is a gap between the year 1999 and 2017, approximately, where those 16 middle years, which are those of my best known work, do not they are in the exhibition "and that that is purposely. The overcoming of the war, is a sample that is directed "to the origin and to the present" of its realization as an artist.

On display until August 3 at the new headquarters located in Viamonte at 452, the Magdalena Jitrik exhibition is an opportunity to understand the issues that go through a generation of Argentine artists who witnessed the passage of the country towards democracy and through of their languages ​​reveal what has not changed so much, that it has only changed its name.