THE MUST VISITS OF BAPHOTO 2019

Within the framework of the fifteenth anniversary of BAphoto photography art fair, yesterday in full assembly, the proposals of the different stands -occupied by 29 national and international galleries- range from the photographic production of the late nineteenth century documentary photography, even to contemporary pieces of the international scene. In the fair that goes from September 6 to 8 in the stables of the La Rural fairground, the programming is vast and the artists exhibited are many, however, there are some spots that no visitor should overlook: the galleries Carmen Araujo, Ruth Benzacar, Vasari and Nora Fisch –all of them located in the Main Sector of the fair-, Links Project –space curated by Mercedes Claus and Valeria Gonzales-, Homage Artist, and Out of Box, a new section of BAphoto to be occupied by Peruvian artist Roberto Huarcaya. 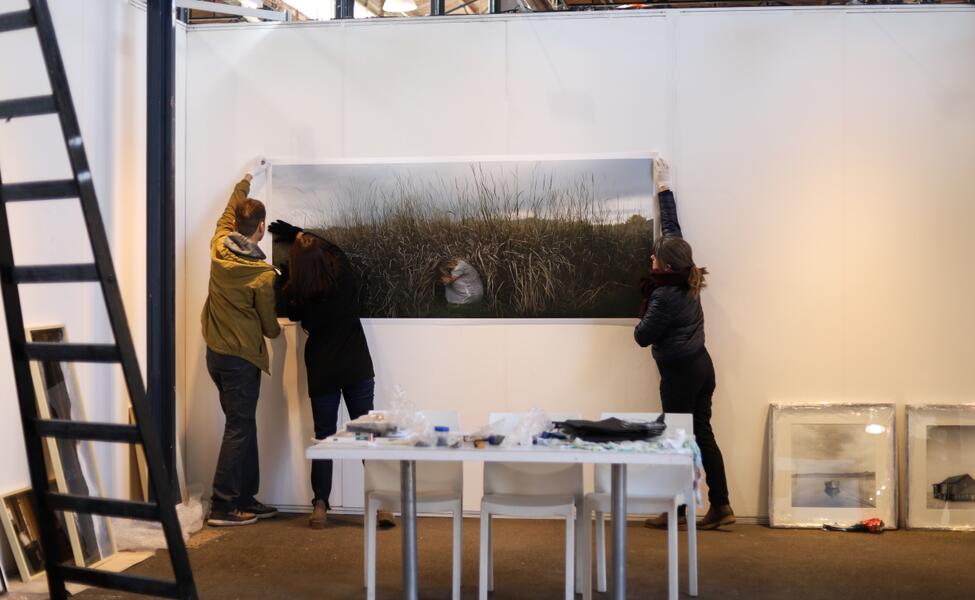 Among the galleries that occupy the central space of BAphoto 2019, the most innovative proposals are those of the Argentine galleries Nora Fisch and Ruth Benzacar, in addition, of course, of Vasari that year after year brings to the visitors the work of the great protagonists of the Argentine photography of the twentieth century: Annemarie Heinrich, George Friedman and Juan Di Sandro among others.

In the case of Nora Fisch, the gallery presents the photographs of two key figures. On the one hand, the recent works of Alberto Goldenstein, an indispensable artist to understand contemporary Argentine photography. On the other, a series of photographs taken by Anatole Saderman to Biyina Klappenbach, great-granddaughter of Bartholomew Miter, who has apparently been recognized as a pioneer in performing art. The archive, recently found by Alfredo Srur - director of the Argentine Historical Photographic Research Center - is a jewel for the first time on the occasion of a fair.

Located in the main corridor of the stables, the only one that presents the emblematic Ruth Benzacar are the photographs taken by contemporary artist Luciana Lamothe. Usually associated with sculpture and installation around the materiality of the objects, the gallery directed by Orly Benzacar and her daughter Mora Bacal brings to BAphoto 2019 much of the photographic production of the Argentine artist. “We had a lot of Luciana's photographic and audiovisual material that we wanted to show. BAphoto appeared as the perfect time to show her production from a different perspective,” explains Valeria Pecoraro, sales director of the gallery. Under this perspective, the photographs exhibited at the stand come of the series Meadas, ENDC., an audiovisual piece entitled 5 acciones (5 actions) –video showing five subversive activations made by the artist during 2003- and a series of photographs taken in the frame of Art Dubai, fair to which Lamothe was invited.

Finally, the Venezuelan gallery Carmen Araujo presents the production of two essential artists of Latin American photography: Luis Brito (1945-2015) and Ricardo Jiménez (Carácas, 1951). In addition to these teachers, the gallery puts into dialogue with these works the work of contemporary artists such as the Argentine Martín Legón and the Venezuelan Antolín Sánchez.

Under the curatorship of Mercedes Claus and Valeria Gonzales, Links Project - a section that already has extensive experience at the art fair - is one of the most interesting proposals of this edition. With the title De arañas, medusas y humanos  (Abput spiders, jellyfish and humans), the intergenerational crossing of artists, including Adrián Villar Rojas, Annemarie Henrich, Cecilia Lutufyan, RES, Estefanía Landesmann, Manuel Fernández, Samuel Lasso, Andrea Ostera, Santiago Villanueva, Nicolas García Uriburu, Grete Stern and Jesu Antuña trace a brief history of art that emerged as ecological resistance and promotion of new ways of life. With the focus on one of the central themes that contemporary art addresses - hegemonic scientific models and planetary destruction - Links Project sets up an exceptional timeline.

The space of the fair dedicated each edition to honor emblematic photographers of Latin American art - have been protagonists of this section in previous editions George Friedman, Juan Di Sandro, Pepe Fernández and the gallery owner Frans van Riel-, presents this time the work of Pedro Otero.

Raised in the Avellaneda neighborhood (Buenos Aires, Argentina) Fotografía y música (Photography and music), a series made in the 50s, was a fundamental artwork in which the artist made an overlay of negatives through an enlarger made with oil cans. Through a surrealist style, the series had its first exhibition at the Peuser Hall, in 1956, and later years it reached the Museum of Fine Arts in Rio de Janeiro, in 1959. Currently, some of its works are part of the Museum's collections. Modern Art of Buenos Aires and the Museum of Fine Arts of Argentina, although the complete series has not been exhibited for more than twenty years. Under the curatorship of Francisco Medail, artistic director of the fair, this section proposes to revalue the work of one of the most important Argentine photographers of the last century.

Finally, the new section created for the fifteenth anniversary of the fair brings installation Parents Dancing Scissors (2019), by the Peruvian artist Roberto Huarcaya -represented by the Rolf Art gallery-, never before exhibited. Huarcaya's work explores Andean culture from the direct printing of light to photosensitive paper - a resource used in his famous Amazograms and Andegrams - and thus develops a photogenic drawing of the American communities.