LONG BEACH, CA – The Museum of Latin American Art (MOLAA) presents OaxaCAlifornia: Through the Experience of the Duo Tlacolulokos. The exhibition, which opens to the public on March 1, features a series of eight murals created by Oaxacan artistic duo Tlacolulokos, Dario Canul (b. 1986) and Cosijoesa Cernas (b. 1992) that explore a powerful message of cultural duality. 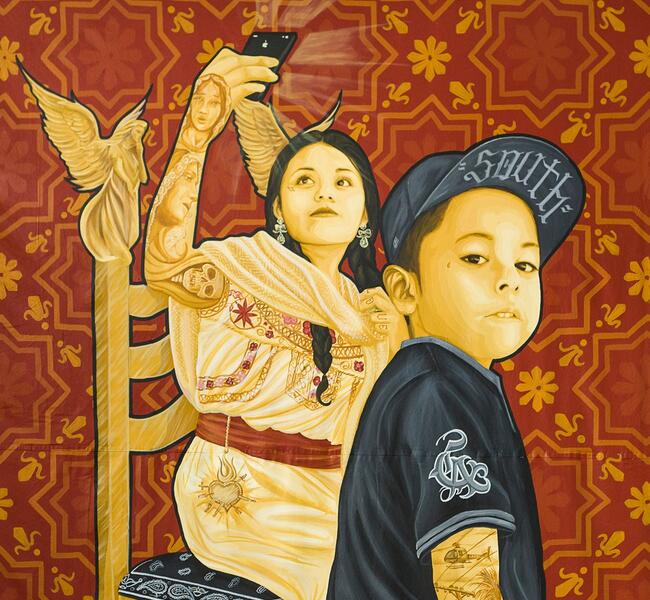 Originally created as part of the exhibition known as, For the Pride of Your Hometown, the Way of the Elders, and in Memory of the Forgotten (2016-2017), the murals made their debut in 2017 at the Los Angeles Public Library. They were featured in the exhibition, Visualizing Language: Oaxaca in L.A., as part of the Pacific Standard Time: LA/LA initiative.

“MOLAA is committed to presenting exhibitions that cultivate a cultural exchange and dialogue on both a national and international level,” said Lourdes I. Ramos-Rivas, Ph.D., President & CEO of MOLAA.

The murals explore the intersections of language and culture as a key lifeline – sustaining the shared experience between Los Angeles and Mexico, and beyond. By focusing on exploring the history and underrepresentation of indigenous peoples, the murals address how migration and the socio-political environment shape identity and cultural traditions.

“The message of our murals is simple. Wherever you are, you must know where you come from, be aware of the identity of which you descend and always dignify it,” said the artists.

Their creative process is closely related to the communication that exists between Mexico and the United States, taking from this exchange different expressions that occur from unofficial cultural contexts, as well as the experiences and analysis that give them the coming and going of people and ideologies.
The exhibition demonstrates the Museum’s commitment to providing a programming of excellence that is diverse and inclusive, where all mediums of Latin American and Latin art are represented.

“The Museum of Latin American Art (MOLAA) is proud to present this great work of life stories and experiences of cultural exchange from the hands of the artistic duo, Tlacolulokos,” said Gabriela Urtiaga, Chief Curator at MOLAA. “Culture, history, and migration, from south to north and from north to south, are the central axis in this series of large-scale paintings.”

The murals are now part of the MOLAA Permanent Collection and will continue to be available to the public at the Museum as part of an exhibition to showcase their relevance within the context of Latinx communities in California.  A comprehensive and dynamic interpretive program that expands on the symbols used in each mural will accompany the exhibition.

About the Museum of Latin American Art (MOLAA)
The Museum of Latin American Art (MOLAA) is the only Museum in the United States fully dedicated to modern and contemporary Latin American and Latino art. Founded in 1996 by Robert Gumbiner, MOLAA houses a collection of more than 1,600 works of art including paintings, sculptures, drawings, mixed-media, photographs, and video art. The Museum is a multidisciplinary institution committed to providing a platform for cross-cultural dialogue through the arts, educational programs and events for the community.