The Chilean AMA Foundation, better known as FAMA, donated to New York’s Museum of Modern Art (MoMA) Ocean, 33 ° 02'47 "S / 51 ° 04'00" N, the Chilean artist Enrique Ramírez artwork. The reason for the donation is the celebration of the tenth anniversary of the foundation. 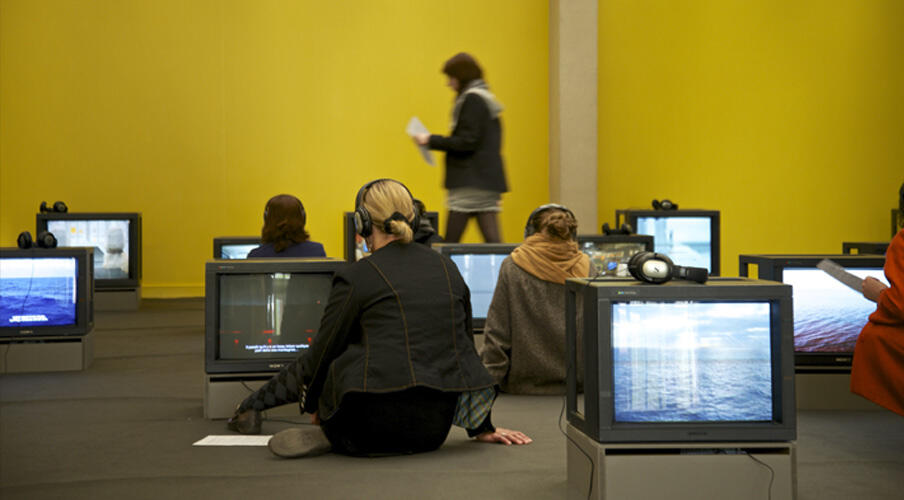 The piece delivered to the New York museum is an exhaustive work done by the Chilean visual artist for almost a full month traveling on a cargo ship. The work consists of an audiovisual piece shot in a sequence shot during a 24-day and five-hour sequence, the time it took for the ship to cross the Atlantic Ocean from America to Western Europe. "The camera cuts, but its cut extends ad infinitum during the long transfer of goods from the third world to the first world. Thus, the continents seem small obstacles in the movement that connects the distant with the near, the original with the copy, annulling finally all hierarchy and making the viewer take consciousness through the extensive aesthetic enjoyment of an immensity that is easily accessible " , said Ramírez in relation to his work.

According to Ramírez, the video already exhibited in different parts of the world - Dunkerque Museum of Fine Arts (France) and the Creative Center of Osaka (Japan), among others -, utilizes the sea as representation because of it’s unstable horizon condition. " In the sea one seems to be on a constant journey. " In addition, the ocean is a crucial geopolitical element in the current political context: "It is the place of migrations and is where the world economy is. Today the world is reflected in the sea, "explained Ramírez.

With what it means for an artist to be part of the MoMA collection, undoubtedly one of the most important museums on the world stage, Enrique Ramírez expressed his joy and the confidence that this gesture means for his personal career. "The recognition of the value of the work in the art world for me is absolutely important," he said.

Regarding the choice of the work donated by FAMA, foundation’s executive president Bernardita Mandiola explained: "We have supported Enrique throughout his career in exhibitions in Chile, Argentina and at the Venice Biennale in 2017. We believe in him as an artist and in the importance of his work ". Likewise, she outlined that this is also part of a support process from the foundation with artists from the region to be present in international museums.

For his part, Juan Yarur, president of Fundación AMA, said: "This donation is another way of celebrating FAMA's anniversary. It is important to mark milestones rather than organize and make parties. That's why I asked my brothers to donate out of the four in honor of my father. It's a way to celebrate the 10 years of a foundation that bears his name. "

AMA Foundation was created in 2008 as an organization to articulate the AMA Scholarship. Since then, the mission is to share knowledge through support for the production, dissemination and studies of contemporary art; create international contact networks for all actors of contemporary art, both artists, cultural managers, curators, and art historians. The objective of FAMA is to support the growth of the artistic scene in Chile to boost international recognition of the local scene.

Among the lines of work are: AMA Scholarship: aimed at Chilean contemporary artists which grants an annual residency at Gasworks, London. The Juan Yarur Collection: which includes works from 1960 to the present. Fama editions: program of monographic publications focused on a specific aspect of consecrated Chilean artists. Extension: line that seeks to promote the exchange of research in the history of art and works in partnership with the University of California, Los Angeles, USA. (U.C.L.A) and also with the Museum of Fine Arts of Houston.