The Musée d’art contemporain de Montréal has the great privilege of hosting the first major museum survey of Rafael Lozano-Hemmer’s work to be presented in Canada or the United States. 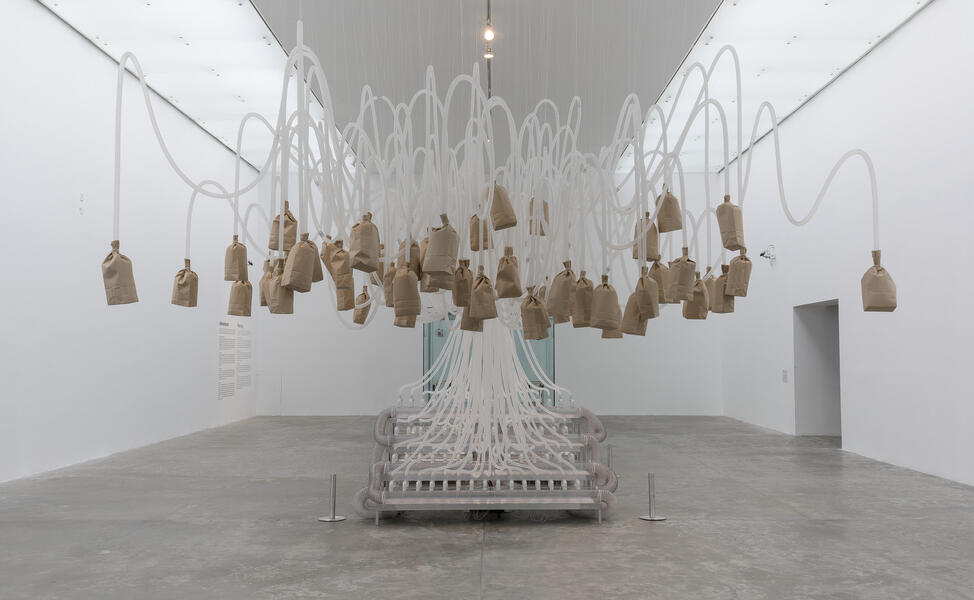 Montreal-based artist Rafael Lozano-Hemmer (born in Mexico City in 1967) is one of the leading figures on the international scene of digital-media practices today. After co-producing satirical “technological theatres” in the late 1980s, in the following decades he went on to explore the performative potential of interaction, focusing on the integration of artistic disciplines, and becoming increasingly known for large-scale “anti-monuments” that transformed public spaces with ephemeral interventions that were “critical platforms for participation.”

Rafael Lozano-Hemmer: Unstable Presence highlights the material and sculptural dimension of the artist’s production of the last 18 years, offering a new perspective on its poetic and political enactments of co-presence. Referring primarily to the inevitable coexistence of viewpoints, active voices and singular experiences elicited by the artwork’s dialogic devices, the notion of co-presence also alludes to more turbulent and asymmetrical types of relationships: forced cohabitations and power dynamics in private and geopolitical spaces, as well as the interplay of gazes and bodies under contemporary techniques of surveillance and control. Indeed, Lozano-Hemmer’s works offer a nuanced view of the emancipatory rhetoric of participation and of digital media aesthetics, reminding us of technology’s complex and often problematic involvement in broader social, economic and political contexts.

Showing how we interact with technology and making the internal mechanisms of devices visible is one of the strategies deployed in Lozano-Hemmer’s works. As you walk through the exhibition, the physical presence of the works, their sculptural occupation of space, provides an important counterweight to the argument of digital “dematerialization.”

The exhibition will present the world premiere of Sphere Packing: Bach (2017)—a spherical room with 1,128 speakers each of which plays a different composition of Johann Sebastian Bach—and other major works such as Vicious Circular Breathing (2013), Zoom Pavilion (a collaboration with Krzysztof Wodiczko, 2015), Pan-Anthem (2014), Call on Water (2016) and Pulse Spiral (2008).

Rafael Lozano-Hemmer: Unstable Presence is co-organized by the Musée d’art contemporain de Montréal and the San Francisco Museum of Modern Art. It is co-curated by Lesley Johnstone, curator and head of exhibitions and education at the MAC, with François LeTourneux, associate curator et the MAC and Rudolf Frieling, curator of media arts at the SFMOMA. The exhibition will also be presented at the Museo de arte contemporáneo de Monterrey (MARCO), Mexico, in 2019 and at the SFMOMA, in 2020.

Lozano-Hemmer was the first artist to represent Mexico at the Venice Biennale, with an exhibition at the Palazzo Van Axel in 2007. He has also shown at multiple other biennials and triennials. Lozano-Hemmer’s artistic production has been featured in solo exhibitions and performances in numerous institutions, including the Museo Universitario Arte Contemporáneo (MUAC) in Mexico City (2015), San Francisco Museum of Modern Art (SFMOMA) (2012), the Museum of Contemporary Art, Sydney (2011) and the Guggenheim Museum, New York (2009). His work may be found in the collections of such museums as the Museum of Modern Art (New York), Tate Modern (London), Musée d'art contemporain de Montréal, SFMOMA, Hirshhorn Museum and Sculpture Garden (Washington), Borusan Contemporary (Istanbul), MUAC (Mexico) and others. He is represented by bitforms gallery (New York), Art Bärtschi & Cie (Geneva) and Max Estrella (Madrid).