The latest exhibit by Brazilian artist Montez Magno (b. Pernambuco, 1934) contains over forty works, rigorously selected to reflect Magno’s sixty-year investigation of artistic language as expressed on a myriad of surfaces. 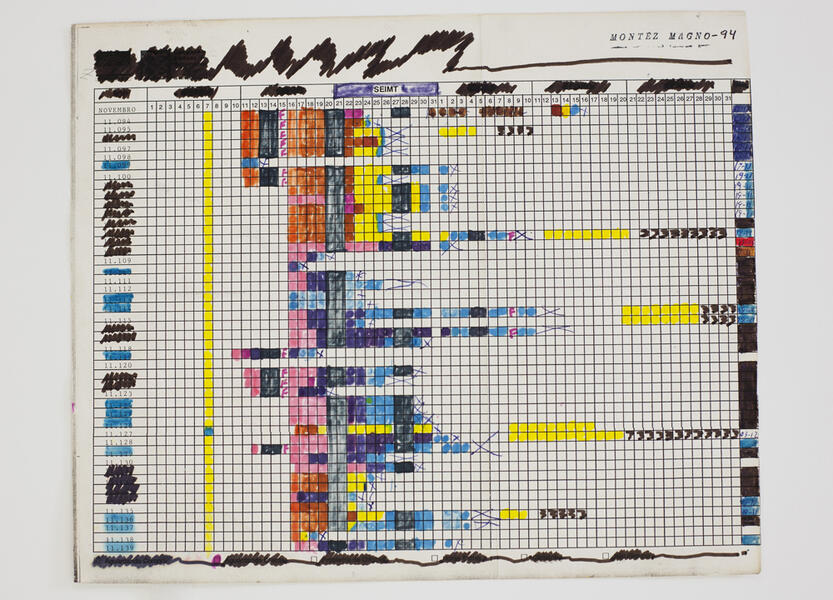 Curated by art critic Lisette Lagnado, “Poemata” is Magno’s second individual show at Galeria Pilar, following on from “Galaxia”, his Clarisse Diniz-organized exhibit in 2012, This time, Lagnado examines the artist’s poetic inflections, a lesser-known aspect of his work, highlighting the dialogue between painting and script; between “celestial letters” and poems.

As an artist that lived through the decades of concretism and neoconcretism in Brazil, his definition of poetry cannot be restricted to verbal language. For Montez Magno, the poetic dimension expands into space and reveals an intimate relation with music. Possessing of a powerful tenor voice, Montez Magno from 1972 began producing a series of drawings on musical scores. Being bedridden at home in Olinda that year, he was very prolific.

The written word has accompanied Magno’s artistic life throughout his career. He kept up extensive correspondence with people near and far, including Ivan Junqueira, Theon Spanudis and Osman Lins. He also wrote 12 books of poetry, of which he published 11 independently. His first two collections– A Rondas dos Ciclos and Os Cantares de Olinda – date back to 1950, although they were later destroyed by the author himself. The motives for this act remain vague, although the artist continues to include the volumes in his list of published titles.

“Poemata”, which opens to the public on March 30, seeks to establish non-hierarchical relations between two praxis of creation, making subtle transitions using works in different forms (for example, a painting and a score, a drawing and a poem), subtle just like the lines that appear in the white space on the surface of his work, be it paper, canvas or Styrofoam. With lines at times vertical and at others horizontal, reminding us of the patterns of a notebook, the chosen works display a type of leitmotif in the vocabulary of the artist, independent of the chosen surface.

You can see a profound coherence to these works, united by a formal affinity despite their diverse intentions. During a visit to the spacious, book-filled studio where the artist lives in the neighbourhood of Casa Forte in Recife, Lagnado found a previously unseen series of works, dated 1994, produced in hommage to the Canadian artist Agnes Martin (1912-2004).

The dry pastel applied directly to canvas that we see in Montez Magno’s exhibit was also used by Martin. However, the series in homage to the Canadian artist was created using Styrofoam rather than canvas, while the lines traced on the work are grouped in “symphonies”, which allows is to think that music is present in both series.

Accompanying Montez Magno on his long artistic journey is a scholarly adventure that takes in frequent tributes to poets and artists (Van Gogh, Malévitch, Mondrian, Morandi, Beuys to name a few). It also provokes us to think about how life away from major centers where culture circulates up until the turn of the millennium represented for a whole generation of artists from the northeast of Brazil (Daniel Santiago, Paulo Bruscky and many other known artists today) a way of interacting with the world.

For this reason, the curator inserted two paintings with a thicker and darker atmosphere, Caribe and Africa, necessary counterpoints to highlight the unquestionable density of this work despite its apparent ethereal character, which is almost immaterial in some works.