Until March 10th, at Buenos Aires Museum Modern Art,Nicolás Mastracchio’ssolo show Pulso is presented. With artworks hanging from the ceiling, the Argentine artist creates an ecosystem where the viewer turns his entire body to space. 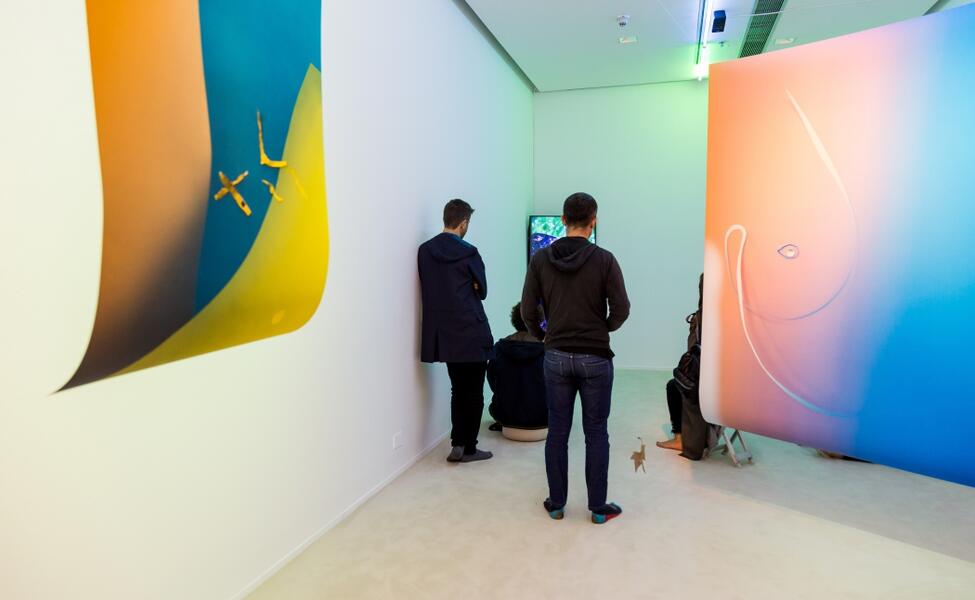 As a constellation, Mastracchio's photographs hang without a frame in the middle of the room. Likewise, other objects are superimposed on the photographs: synthetic feathers, dried leaves, snails, mother-of-pearl stones, a peanut shell, paper ribbons, threads, etc. And all this suspended in the restless air that displaces all the pieces slightly.

"The photographs are a moment of synthesis within the exhibition: two-dimensional planes that condense the three-dimensional context displayed in the mobiles. Thus, the photographic image does not explore an 'outside of itself' to conquer the third dimension, but concentrates the aesthetic, spatial and material relations that are around it, "expresses the museum statement. In addition, the exhibition is completed with an audiovisual piece that marks the pulse from a constant flow where soundtrack predominates, accompanying the viewer's immersion throughout the visit. "The works allow us to visualize the energy that concentrates the current image: how they become an accumulation of physical sensations, of contexts and of relationships between bodies and images", explains the curatorial text.

Although the artist continues with previous proposals where he imitated the virtual space of the digital image without using postproduction tools such as Photoshop, he focuses here on the bodily experience of the viewer. With Pulso, Mastracchio seeks to slow down perception from a connection with all the senses; a fragile, subtle, transitory connection and, precisely thanks to all this, densified. The project was influenced by Zen principles that the artist put into practice a couple of years ago, above all, through meditation. It works on the encounter between the fixed nature of the photographic image and the ideas of movement and change central to these principles. Thus, he was exploring the spontaneous and ephemeral configurations of a small cosmos of objects, which is ordered in a few minutes and then photographed, together with the installation of mobiles in motion that he presents for the first time in this exhibition.

Nicolás Mastracchio was born in Buenos Aires, in 1983. He attended work clinics with Ernesto Ballesteros (2005), Leopoldo Estol (2006) and Mónica Giron (2008). He participated in the Artists Program at Torcuato Di Tella University, 2009, and was selected for the Kuitca / UTDT Scholarship, 2010-11.

He received different awards and scholarships, including the Skowhegan School of Painting and Sculpture residence, Maine, USA, 2012; in 2013 he won the Lucio Fontana Award to reside in Turin, IT; the Yaddo Artist's Residency Scholarship, Saratoga, NY, 2016, and the AMEXCID Scholarship that granted her a stay of artistic creation in Mexico City. In 2017 he participated in the Headlands Center for the Arts scholarship, AIR, Sausalito, CA.

His work was exhibited in public and private institutions in Argentina and abroad, such as the Museum of Modern Art in Buenos Aires; the Recoleta Cultural Center; the National Library of Spain, Madrid; the Pilar Gallery, San Pablo; the Museum of Contemporary Art of Buenos Aires and the MALBA museum.