PIA CAMIL AT THE AICHI TRIENNALE

In the fourth edition of the Aichi Trienniale, Japan celebrates one of the biggest festivals ever in the country. Conceived as an international show that promotes the global character of culture and art, Taming Y / Our Passion - an English title given by Daisuke Tsuda, artistic director of the triennial - summoned artists from all over the world to introduce works that address the information and control conflicts that lurk contemporary societies. In this scenario, Mexican artist Pia Camil inaugurated on Thursday her Telón de Boca project. 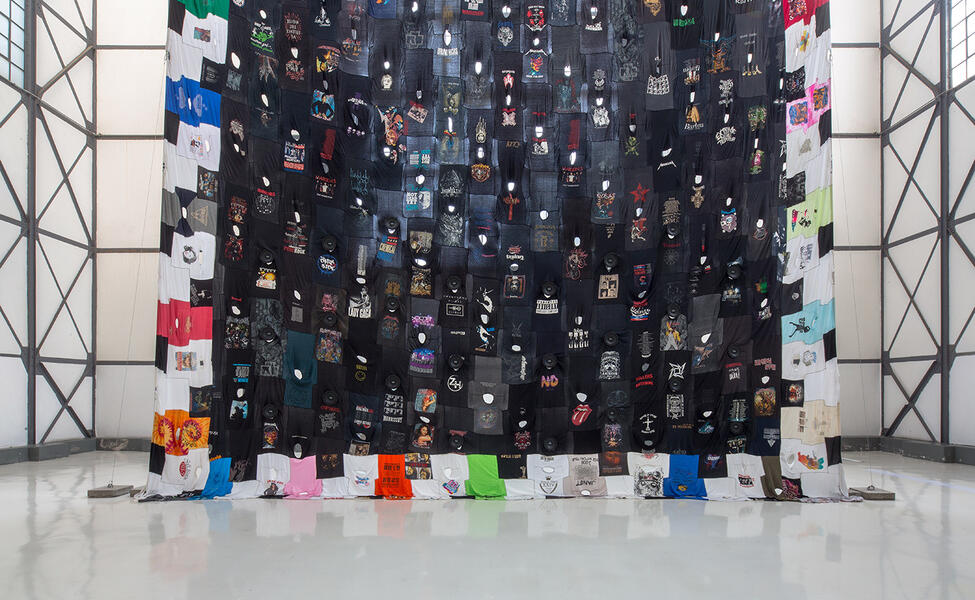 The work exhibited by Camil, previously presented at the Museo Universitario del Chopo (Mexico City), consists of a large-scale textile artwork that uses rock band t-shirts sold in the tianguis (market type originated in Mesoamerica pre-Hispanic) Cultural El Chopo as a predominant material. By sewing each other and integrating loudspeakers to it, the artist built a huge curtain that interrogates the economic relations between the exploiting and exploited countries (in this case, the United States and Mexico), and the impact it has in consumer habits. Thus, Telón de Boca also proposes to imagine alternative forms of transactions and traffic of goods. At present, the t-shirts sold in Mexican markets such as the tianguis El Chopo, produce surplus production manufactured by US companies in the provinces of their neighboring country.

In addition, the great curtain is also an installation. As it happened in the University Museum of Chopo, the work proposes an open microphone where visitors can pass and sing, talk or start a conversation. In the case of the Aichi Triennale a series of concerts and conferences were programmed to use the curtain as a stage.

Founded in 2010, the Aichi Triennale was conceived as one of the most promising international events on the Japanese agenda. Every three years the institution has invited a different artistic director to develop a specific concept around which artists and exhibited works will be selected.

In the first edition, Akira Tatehata proposed the title Arts and Cities in order to generate a dialogue between urban centers and artistic production; In 2013, after the tragedy of Fukushima in 2011, Taro Igarashi established the concept of Awakening –where are we standing? - Earth, memory and resurrection; The last edition, under Chihiro Minato’s direction, was organized around Homo Faber: A raimbow caravan.

As for Taming Y / Our Passion, it is actually the English translation of the original name that the journalist and writer specializing in music and computer science, Daisuke Tsuda - artistic director of this triennale -, put to the event. In its Japanese name, Tsuda established a pun on the basis of polysemy that the characters of the name carry: emotions and feelings; facts and conditions, that is, information; altruism and compassion. "We are living through an era where our kanjō (emotions) is stimulated and oriented by the jōhō (information) produced by the mass media and the Internet," Tsuda explains in a presentation of the Triennale, adding: "This operation divides the world, and a possible solution comes from jō (compassion)".